I am under some COVID thingy. My whole family got it but already recovered while I, as usual, was the last man standing and I finally got that shit too. But it is not really that heavy, just overall malaise and coughing. I, actually, pray to Our Father, which art in heaven, that it is COVID, not the fvcking bronchitis, which I had about 5 years ago. That stuff is nasty, because you cannot sleep because of the non-stop exhausting cough, even with a max strength prescription drugs. Other than that, it is nothing special, just traditional mild cold/flu.  I did a morning interview with famous Russian Podcast today together with the Colonel of Central Apparatus of Russian MoD Vladimir Trukhan and our gracious host Polit Wera. Those who want to suffer from Russian language and words' play, here is the path to linguistic hell in Russian. Wera decided to do it on RuTube this time. I am coughing already there, a lot.

While I recover, it is my second day, Larry Johnson wrote an excellent piece on timing and the timeline of SMO--a precise subject we discussed today.

A common theme marshaled to “prove” that Russia is failing in its war with Ukraine is that Russia failed to quickly take Kiev and, in fact, was forced to retreat from Kiev. In addition, the military analysts that populate the cable news channels in the United States insist that the Russians are bogged down and not making the rapid progress they (the Russians) expected. This is nonsense. I defy anyone to show me one statement by Putin or the Russian General Staff where a specific timeline was established or identified. This is a construct of western military analysts who do not have access to Russia’s military plan and are projecting their own wishful thinking as “evidence” of a flailing Russian military. But it is not only western military analysts sounding the Debbie downer dirge. A blogger popular with many Russia watchers, Strelkov, also is pushing the narrative that Russia is bogged down in the Donbas. More about Stelkov in a moment.

Larry hits the nail here on the head regarding Girkin-Strelkov. This specimen was always out of his depth, having zero military academic background, not to speak of his absolutely risible lack of any understanding of the conflict. You would expect this from such a "colonel" who mostly spent his military life as a volunteer in low intensity conflicts primarily on NCO level positions. How he "defended" Slovyansk in 2014 everybody saw and that is why he spent three days naked in Donetsk prison, awaiting execution, and only interference from Alexandr Borodai saved his sorry ass. But then again, I am on record that I do not look kindly, albeit do not completely forbid, at references to such Girkin's enablers as "Colonel" Cassad (Boris Rizhin). Cassad is in all this primarily, for all his commendable humanitarian activity, for money, same as Podolyaka and many others, including Girkin who is still butt-hurt that every single political party in Russia, from UR to CPRF refused even to talk about his aspirations to run on ANY platform as long as it gets him to State Duma. So, he is a classical sore loser and that what defines his "activity".

So enjoy Larry's excellent write up and look, they DO exist, after all: 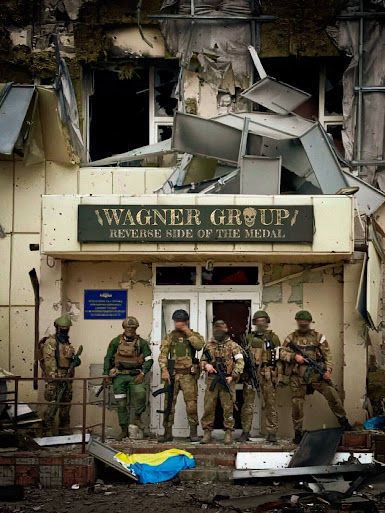 Lol, this is in Popasnaya just recently.

As you can see yourself, Russia is done with Azov Steel and Russian forces will complete "corking" Nazis there for good.

This is today. BTW, John "the sentimental one" Kirby today vehemently denied the rumors spread by NY sewer, aka New York Times, that the US provides "targeting against Russian top brass in Ukraine". I happen to agree with him on that and not because of a benevolent nature of Pentagon but because Russia can easily respond in kind, because Russia is the only OTHER country, apart from the US, in the world which has a very developed ISR system, from space to ground assets, and it is not that difficult to develop targeting. Neither Pentagon nor Russian MoD want this type of the war of the assassins. So, just let leave it at that.
Posted by smoothiex12 at 8:05 PM