Or as it is more conventionally known in the world not affected by 17 Moments of Spring and Stierlitz's thought process--food for thought. Let's start with a simple truism: by now only completely sublime (or complete morons) still think that US financial market is a viable part of economy. Of course, it is not, because it is a casino set up for enriching a very narrow group of people and financing their utterly destructive ponzi schemes by means of exporting otherwise insane inflation abroad by means of T-bills, yes, those US Treasuries which are the main instrument of US existence as a more or less functioning economy. More or less. Here is the "map" of the main holders of this, ahem, "treasure" as of today. I deliberately included only holders with $100 billion and above:

As you can see Japan and China are most "invested" into those papers today running a "balance" of more than $2.3 trillion combined. Ah, yes, about the balance. This is a hefty sum, even $1 trillion is a hefty sum and leads us to a very interesting conclusion which Russians, through a very reputable Ria.Ru arrived today and this conclusion will never make it to US media for a obvious reason. Get a load of this title:
США готовятся объявить дефолт по долгам Китаю
The United States Are Preparing To Declare Default On Debt To China
That's warmer and that is what largely behind anti-China campaign in the US in regards to Covid-19. I make a disclaimer immediately here: I don't know HOW Covid-19 originated, nor, at this stage, do I particularly care because I arrived to my personal conclusion that it is not any kind of bio-weapon and thus was not a deliberate act. But default on China's debt, and many things point in this direction, could be a desperate act of trying to save a collapsing pyramid of financial manipulations and issuing of worthless debt obligations which are... which are...so, nobody really knows if there is a serious interest for buying those anymore (especially short term) other than Fed and Fed is not talking.

How probable is this scenario? I think it is fairly probable, and keep in mind, even financial information pouring out of US "analytical" financial orgs may still have a very low reliability, as it is generally he case with US economy whose statistics is simply a result of cooking the books for all kinds of rating agencies to present US economy as top of the line credible. Well, manipulation, you know. This is not to mention the United States demanding now some "compensations" from China for Covid-19. Remember US kangaroo court making Iran "guilty" for 9/11 instead of kicking Saudi's ass? Same shit, pardon my French. So, anyone has any doubts now on how it will all proceed? Mind you, China is not Iran, she is the largest economy in the world by far and she will be royally pissed. Well, she already is. But by now we know the quality of personnel in US "elites" who, as I state ad nauseam, can not properly juxtaposition cause and effect, it is totally conceivable that they will decide, possibly out of a complete stupidity, to push the pedal to the metal and destroy whatever is left of US economy by exposing it for what it is--a huge ponzi operation with zero trust (ahem, credit rating) and with it demolish whatever is left of US Dollar's attractiveness.

You may say, they are not THAT stupid. Actually, they ARE. Consider environment from which this cabal of financiers, analysts, economists and other moneyed people came from. I write about this non-stop. You think that they really know what is going on? I doubt it. They, certainly, can calculate debit and credit based on GIGO but most of them never worked a day in a productive capacity and never built anything of real value. This post-modern generation of Ivy League humanities sewer are all one-trick ponies fed non-stop monetary orthodoxy of laissez faire. They know how to "make money", maybe run a bank, what real economy is and how it works--no. They were not taught this intricate subject and that is why they think that defaulting on debt to China could be a good idea. Some common sense voices exist even there:

If the U.S. entered a steep recession or depression without dragging the rest of the world with it, users might leave the dollar. Another option would involve some major power, such as China or a post-European Union Germany, reinstating a commodity-based standard and monopolizing the reserve currency space. However, even in these scenarios, it is not clear that the dollar necessarily would collapse.

What is highlighted in yellow is precisely what is happening now and one of the major indicator of the new economic reality is the fact that in Russia, which also is affected by the whole clusterfvck, unlike it was the case in 2008, there is absolutely NO rush to buy USD, not even close compared to 2008. In fact, never in my life did I encounter such a condescending attitude towards USD, being given a title of "funny green papers" (zelyonye bumazhki). For years I wrote, economy and strength of a state is defined by a complex combination of factors among which currency and finances are but couple among huge number of factors defining national strength. I think now it is a good time to REITERATE Barnett's definition: 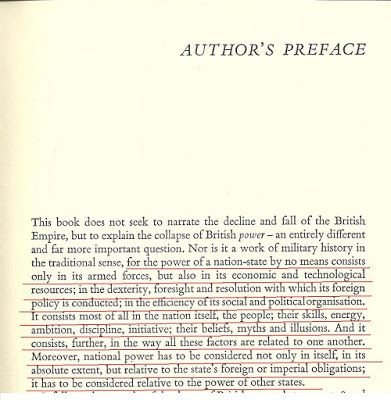 Needless to say, modern US meets fewer and fewer of those criteria. Simple as that, and that is an information for thought.
Posted by smoothiex12 at 1:18 PM