As you may have noticed in the latest discussion on this blog the issue of those poor Russians--there are some poor Russians, no doubt--continues to haunt many Western minds. Famous shyster from "geopolitics" George Fridman of formerly STRATFOR even came up today with this, I am sure prophetic, wink, wink, vision of Russia and Russians--a collection of platitudes, rumors from Russian liberda (no one of consequence will talk to him in Russia) and cliches which he titled no less than that:

Russia is the world’s biggest loser from oil’s crash, and that’s reason to worry

Mind you, this is the guy who described how the United States (and NATO) can defeat Russia conventionally in Ukraine in 2015. So, enjoy. Strangely, however, AFP came up today with by far more balanced and, most importantly, very significant distinction between Russians' and Westerners' lives.

Sokolniki (Russia) (AFP) - After years spent on submarines with Russia's Northern Fleet, Ivan Chernyshyov is having no problem adjusting to life on coronavirus lockdown -- especially as, like many Russians, the retired sailor can escape to the countryside. "It's good here. We'll grow carrots and strawberries and maybe even some potatoes," the 78-year-old says, while his wife Lyudmila trims rose bushes in the garden of their country home outside Moscow.

This is what I am constantly stressing--comparing standard of living between Russians and Westerners, especially Europeans, is a fool's errand. Consider this crucial fact--you see, Western media can sometimes operate with reality, when they want to--which is absolutely not accounted for when talking about Russia's REAL economy:

Nearly half of Russia's population is estimated to have a dacha, so when authorities began imposing lockdown measures on Moscow last month, thousands streamed out of the city.

Very many, I stress that, of those dachas are, well, how to put it politely, full blown houses with garden lots and can give a run for the money to many US suburban houses within $150,000-250,000 price range in some nice established neighborhoods. Recall this comparison recently. Russia's sub-urbanization was proceeding apace for decades now and vast growing dacha communities were to be found as early as 1970s even in such places as Petropavlovsk-Kamchatsky (to be more precise, Elizovo) or some cities in Siberia, not to speak of Moscow. Dachas are not only great supplemental food or even income when some of this food goes to local farmers' markets by the so called "dachniks" (people who own dacha) who decide to sell, but also great places to relax. In my first book I wrote:

But even today each Friday in Summer or early Autumn big Russian cities suffer from enormous traffic jams with millions of Russians driving, or taking a train to their dachas or village homes to not only tend to their gardens and garden beds, small agricultural additions to houses, which in the hard times of the 1990s inhuman “reforms” allowed many to survive. Many still escape the city for the calm and relaxation of pastoral living, going back to their village roots, from where the Russian nation sprouted. It is a totally normal picture to see some Ph.D. in electronics or a designer of crucial parts for aircraft to enthusiastically tend their cabbage, or potatoes with carrots on their country side plots next to often solidly built luxury houses which are still built on the ground from which, throughout centuries, nobody could uproot the Russian soul. (Chapter 5, page 124)

As one commenters to this article noted:

Western media always portrays Russians as very poor people. However, it seems that half of them have a second home in a country side? How is that for being poor?

Yes, this is the paradox and reality which even best Western alleged "scholars" could not perceive during the Cold War 1.0 and still cannot wrap their brains around this whole thing today. Here is how dacha (and their neighbors') of our relatives looks like in 80 kilometers (50 miles) from Moscow and those are pretty average, nice, but nothing overly special, except a large lot (they don't grow anything). 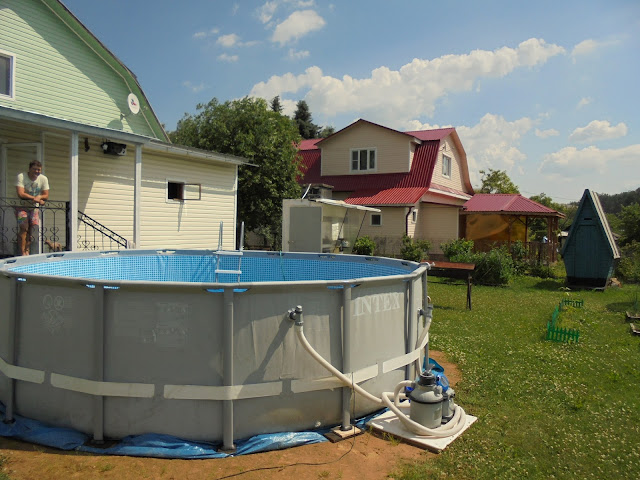 So, the way wealth is spread in Russia, despite inevitable catastrophic stratification of 1990s during a nation-wide robbery, is rather different from the West even today. The process or dual-residency will continue in Russia and here is another wowser for many westerners--most Russians OWN their apartments (flats) and dachas, that means are not in debt on this valuable real estate. Russia's mortgage market is minuscule compared to cyclopic debt bubble of the American real estate and, you may have guessed it already, in US "economic science" this huge bubble is counted towards GDP. This is the fact which great "strategic mind" of George Fridman simply cannot grasp--it is difficult when one is brought up within Wall Street bubble and on cooked books.
Posted by smoothiex12 at 11:39 AM