How about we all admit that the United States WILL militarize space. It goes without saying and even such declarations as this:

Trump has insisted that American law will recognize the possibility of private property on the Moon. And of course right behind such is going to be landlords and rentierism.

compound all those reasonable fears. Yet another round of the US promoting "liberty", "democracy" and "free market" on inter-planetary level. Of course, martians have been worrying about US interference in their internal affairs for decades now: 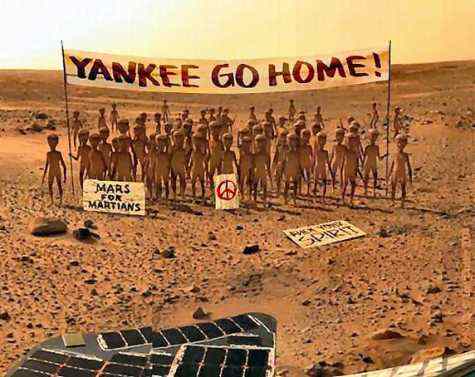 And who would blame them. Russians, seeing martians' concerns decided to address this issue by keeping their space program in good shape and, apart from sending own satellite "inspector" to look after latest and most advanced American spy aka Keyhole, they decided to deal with the US Star Wars aspirations head-on.

The U.S. Space Command said Wednesday it is tracking a direct-ascent anti-satellite (DA-ASAT) missile test Russia conducted to prove if it can interfere with or destroy satellites in low earth orbit. "Russia's DA-ASAT test provides yet another example that the threats to U.S. and allied space systems are real, serious and growing," Gen. John "Jay" Raymond, SPACECOM commander and U.S. Space Force Chief of Space Operations, said in a released statement. "The United States is ready and committed to deterring aggression and defending the nation, our allies, and U.S. interests from hostile acts in space." Space Command officials said the most recent test follows unprofessional behavior observed in February when two Russian satellites, Cosmos 2542 and 2543, tailed an American satellite, USA 245, also known as the KH-11. Time Magazine reported the Russian satellites loitered within 100 miles of KH-11, activity Raymond called "unusual and disturbing," similar to Russia's past risky, high-velocity confrontations in international airspace.

Ah, yes, good ol' "unprofessional behavior" argument. You know, you can recall those Vietnamese, Iraqis, not to speak of Afghan tribes behaving absolutely "unprofessionally" deciding not to surrender but to fight back, with a considerable success. Indeed, how "unprofessional" is this. But if Afghans with AK-47s and some RPGs can wreck a havoc on the ground, Russians, being barbaric and backward, and highly unprofessional, people for some reason developed this unprofessional capability to fight extremely effectively in all existing domains (I am speaking Pentagonese here) and, in fact, can deter back anything the United States can throw at them, including space. Of course Star Tre... pardon me US Space Command issued a hilarious statement:

"This test is further proof of Russia's hypocritical advocacy of outer space arms control proposals designed to restrict the capabilities of the United States while clearly having no intention of halting their counterspace weapons programs," Raymond said.

Actually, hypocrisy is a defining characteristic of the US approach to arms control, that is until the gun has been placed next to US temple and the American side was "convinced" that it is better to talk than to fight. Hypocrisy, however, was exhibited immediately in the continuation of Raymond's statement:

"Space is critical to all nations and our way of life. The demands on space systems continue in this time of crisis where global logistics, transportation and communication are key to defeating the COVID-19 pandemic," Raymond said. "It is a shared interest and responsibility of all spacefaring nations to create safe, stable and operationally sustainable conditions for space activities, including commercial, civil and national security activities."

No shit, pardon my Latin, last time I checked Raymond was a general and in command of a combat arm of US Armed Forces which, somehow, is not about "shared interest" not to speak of responsibility. Let alone "sustainable conditions" (whatever that means) because militaries everywhere, by definition, exist for only ONE purpose--to disrupt these very "sustainable conditions" for any opponent. I know, I have a graduate degree in disruption of "sustainable conditions". But this all pales compared with "sharing" because Trump announcing plans for mining the Moon somehow doesn't sound as "sharing" and is in direct violation of the United Nations 1966 Outer Space Treaty (US is a signatory to it) and this treaty is quite explicit:

outer space is not subject to national appropriation by claim of sovereignty, by means of use or occupation, or by any other means;
States shall not place nuclear weapons or other weapons of mass destruction in orbit or on celestial bodies or station them in outer space in any other manner;

In other words, and I quote:

There is no claim for sovereignty in space; no nation can “own” space, the Moon or any other body.

But I am sure Mr. Raymond knows all that and he surely informed POTUS that Moon, same as Iraq, Yugoslavia, Vietnam or, for that matter, Syria is a sovereign entity and is recognized as such by international law. And here we all have to do a simple research and pull up America's record in regards to this law thingy. Well, doesn't look good. So, Russians decided to make sure that declarations about "sharing" will not result in some space shit designed to attack Russia being in space without proper supervision and doing so Russians developed anti-satellite weapons. Simple, really. This is such an irritating factor in US "strategies", those damn unprofessional backward Rooskies who don't get those very liberating and extremely democratic American weapons. This is not mention the fact that rumors circulate that those "non-existent" Peresvet laser complexes are also capable to deal with satellites and, yes, this is so unprofessional, because as we know only Jedis can have light sabers and fight for all that is good, just and democratic in this world and beyond--you know where no man has gone before.
Posted by smoothiex12 at 10:10 AM