In Christopher Nolan's outstanding 2010 flick Inception, main protagonist, Dom Cobb, played ably by undeniably talented Leo DiCaprio, was using the so called totem, to have an idea if he was dreaming or was inside reality. If the totem toppled--Cobb wasn't dreaming.
Totem was this Ariadne's thread allowing not to lose connection to the reality even in the dream. You may ask why I am waxing here Siskel-Ebertish in mostly geopolitical and military blog? The answer is simple: I allow myself once in a while go to Foreign Affairs publication by the Council on Foreign Relations site to get a gander on the state of America's allegedly most super-pooper, most sophisticated and most powerful minds behind what passes in the US as a foreign policy. Needless to say, that in the last few years those visits are increasingly rare, not least because I cannot tolerate American political "scientists" pseudo-intellectual newspeak--same phenomenon as economic lingo which is a newspeak covering the nature of the institutionalized robbery which passes in US as "economy" (see Michael Hudson's writing on this issue), plus, as I already stated not for once (hey, forget about me, many people stated this, such as Daniel Larison yesterday) I am not interested in wasting my time explaining a systemic delusion which is being presented as a viable "science". But today I ran into Richard Haas' (CFR's biggest honcho) piece about.... blah-blah-blah, yada-yada-yada accelerating something something history, something something to look intellectual and profound  etc. It is not profound, because Haas obviously doesn't know the real history of the 20th century and he is both energy, military and economy blind, using Arthur Berman's definition, but then something caught my eye and I took a screen shot: 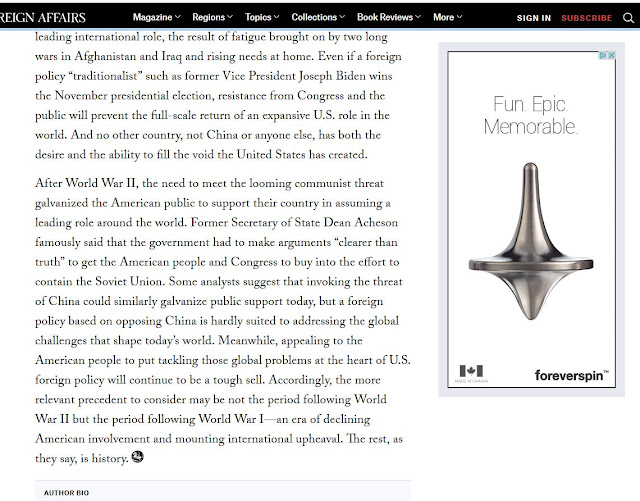 Forget Haas' bloviation about WWII or WWI--drawing (pseudo)historic parallels is a fool's errand, not to speak of the fact that actual history of interwar period, not to speak of the realities of WWII is generally beyond the grasp (or is not allowed to be properly exercised in analysis) of US foreign policy "elite", most of which knows "strategy" and warfare from a white board abstracts in their Ph.D theses written away from warfare realities, any warfare. But it was so symbolic to see to the right of the Haas' "text" an image of what in Inception was Cobb's only connection to the reality--a rotating totem. Even in the closing moment of Nolan's masterpiece we are not given direct answer to the state Cobb and his reunification with his children are--is it still a dream or is he finally able to hug his children in a real world?

I am on the record that far from experiencing any real respect to US foreign affairs establishment, I seriously think that these people live in a dream, in which the modern United States still can be compared to an industrial colossus, unscathed by horrors of 20th Century wars, which is capable (or at least it thinks so) to guide the world to a better future, dispatching its "finest fighting force in history" to remote shores and that it is just the matter of "selling" (that means outright lying) US foreign policy to Americans. Obviously Haas, being preoccupied with geopolitical and pseudo historic "profundities" doesn't use a single number to grasp a reality that the United States in China and Russia alone look at combined GDP and military capability which dwarfs that of the United States (Europe is not even an asset in all that) and is completely capable to deny the US access to Eurasia other than the US being incorporated as one among big equals into the new world order. But for Haas and CFR to really grasp the reality, albeit even he admits that the business is usual is pretty much over, he must wind the totem at the image to the right of his article and wait until it ether topples over, thus indicating the state of residing in reality, or will continue to rotate, indicating the most likely outcome of still dreaming, or residing in the dream in which cause and effect are not connected. But then again, ignoring causality is what makes the present state of the United States and her "elites", who should know better, but don't, so precarious. But I am sure we all know what it is to know about "exceptionalism" and how it destroys the nation which refuses to take a look at the rotating totem.
Posted by smoothiex12 at 11:36 PM