That the person with courage and integrity in American politics came from the... US Armed Forces. I am not a hopeless idealist, US Armed Forces have a shitload of problems with morale, political generals (and admirals) and suicidal personnel policies, BUT it goes without saying that in the environment where words of duty are not always an empty sound, it is not surprising that Tulsi Gabbard started shooting straight and saying what other creeps from Dem.Party wouldn't even think of saying.

Gabbard unloaded on Clinton on Friday, after the failed 2016 presidential contender suggested that “the Russians” were “grooming” her to run as a third-party candidate next year to split the Democratic vote. “Great! Thank you Hillary Clinton,” Gabbard tweeted in response. “You, the queen of warmongers, embodiment of corruption, and personification of the rot that has sickened the Democratic Party for so long, have finally come out from behind the curtain.”

So, Tulsi, you do deserve a highest praise for calling out your party's corruption in general and of Clinton clan (by default) in particular. Maybe there is still a hope for this country. I salute you, Tulsi. As George Orwell said: In a time of universal deceit — telling the truth is a revolutionary act.(c) 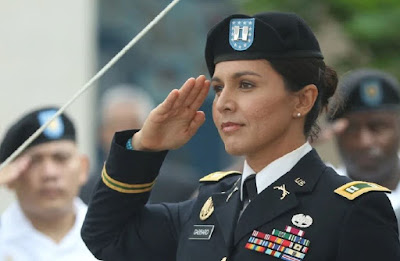 In other, seemingly unrelated, but very symptomatic, news, Russian Orthodox Church comes out with a statement (yesterday) which should give all kinds of whiteboard pseudo "economists" a pause and will explain, what I wrote recently (ha, funny--how coincidental) how overwhelming majority of Russians (Orthodox, Muslim, Jewish, you name it) sees Russia:

Translation: Liberalism has no use for Russians, be it in conservative or social wrap. Caste model of society and possibility of some people surviving at the expense of others do not correspond to what is written in Bible. We need value-based traditionalism, which corresponds to our identity.

Oh, boy, Russians are back at it, I mean at "communism", As famous character of immortal 12 Chairs Ippolit Matveevich was asking the priest Father Fyodor, while kicking his legs trying to wrest a chair (allegedly with diamonds in it) from him:
--Holy Father, maybe you are a member of the Party?
--Maybe I am.

But then again, Correlli Barnett could also be accused in being a "communist" when wrote:

… swift decline in British vigor at home and the failure to exploit the empire were not owing to some inevitable senescent process of history....That cause was a political doctrine.... The doctrine was liberalism, which criticized and finally demolished the traditional conception of the nation-state as a collective organism, a community, and asserted instead the primacy of individual. According to liberal thinking a nation was no more than so many human atoms who happened to live under the same set of laws.... It was Adam Smith who formulated the doctrine of Free Trade, the keystone of liberalism, which was to exercise a long-live and baneful effect on British power.... Adam Smith attacked the traditional “mercantilist” belief that a nation should be generally self-supporting.

You see, how everything comes together? Of course, Russian Orthodox Church are not "communists", but this statement made from the highest podium of World Russian People's Sobor (Gathering, Council) in the foundation of which is the idea of "preservation of people" (no, it is not Solzhenitsyn's, it was stolen by him from Lomonosov's, concept). Liberalism left after itself in the last 30 years a non-stop economic crisis, unending wars, annihilation of the middle and working classes and imposed "morals" and "culture" which make Sodom and Gomorrah a concentration of virtue.

Yet, for all seemingly unrelated nature of Tulsi' courageous statement and Russian Orthodox Church's statement on "preservation of people" there is a real connection, which is symptomatic--so called "liberal" societies have no future, because they lack everything which made humanity to endure through millennia--ability to form and live in community and do it peacefully. It is either a common sense or the world is going to be finished. The choice is ours.
Posted by smoothiex12 at 11:23 AM