This Is A Real Wowser.

The United States is, obviously, run by the Ukrainian diaspora. The name of one of the "concerned officials" has become known and he is:

In his testimony in the House impeachment inquiry Tuesday, Lt. Col. Alexander S. Vindman, the top Ukraine expert on the National Security Council, is expected to describe his concerns with how the Trump administration handled Ukraine policy and with a July call between President Trump and Ukrainian President Volodymyr Zelenskiy. "In the Spring of 2019, I became aware of outside influencers promoting a false narrative of Ukraine inconsistent with the consensus views of the interagency," he says in his prepared opening remarks, which were obtained by NPR. "This narrative was harmful to U.S. government policy. While my interagency colleagues and I were becoming increasingly optimistic on Ukraine's prospects, this alternative narrative undermined U.S. government efforts to expand cooperation with Ukraine."

And who this Lt.Colonel Vindman really is? Get a load of this! I cannot emphasize strongly enough what a madhouse this whole situation is. I will omit here any speculations or, for that matter, legitimate assumptions I know will be true, but I will just say this: this explains a lot, I mean a lot, in the madness which is called US foreign policy. If Canada's foreign policy is openly subverted by Canada's Ukrainian diaspora with a very heavy Banderista element present in it, hence rabid Russophobia and ignoring of Neo-nazism. Now, the United States has a whole family working deep in the US National Security apparatus who decided, unsurprisingly, in favor of any policy which sabotages any Russian-American contacts and improvement of relations.

Hm, what does this remind me of? Ah, Polish, Romanian and other Eastern European diasporas in the US which played a crucial role in NATO expansion, thus ensuring that West will not have normal relations with Russia. 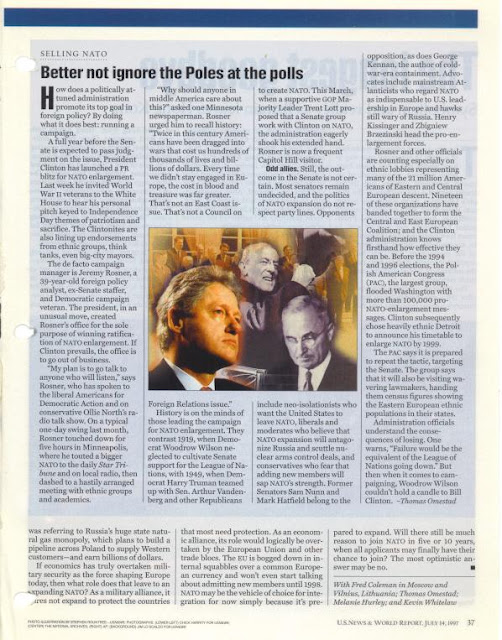 Ukraine, destabilized by the Obama's admin and now turned into a hammer against Russia, granted poor and mentally unstable, is just another step in both American and Ukrainian Russophobia. Now, once this Ukrainian (most likely Jewish) family with the US citizenship is exposed as being deep inside US National Security establishment and close to POTUS the scenario becomes evident. As this Vindman himself states:

The Geopolitical Importance of Ukraine
Since 2008, Russia has manifested an overtly aggressive foreign policy, leveraging military power and employing hybrid warfare to achieve its objectives of regional hegemony and global influence. Absent a deterrent to dissuade Russia from such aggression, there is an increased risk of further confrontations with the West. In this situation, a strong and independent Ukraine is critical to U.S. national security interests because Ukraine is a frontline state and a bulwark against Russian aggression. In spite of being under assault from Russia for more than five years, Ukraine has taken major steps towards integrating with the West. The U.S. government policy community's view is that the election of President Volodymyr Zelenskyy and the promise of reforms to eliminate corruption will lock in Ukraine's Western-leaning trajectory, and allow Ukraine to realize its dream of a vibrant democracy and economic prosperity.

I hope you understand now, that the United States is ungovernable entity entirely corrupted by the external ethnic, from predominantly Jewish AIPAC neo-cons, to Gulfies to Ukraine, influences--all in some form are present through lobbies to direct positions (Victoria Nuland, anyone?) in government. They are also people detached from reality, as testimony of this "American" officer demonstrates. Here is a conclusion of this "strategist".

The United States and Ukraine are and must remain strategic partners, working together to realize the shared vision of a stable, prosperous, and democratic Ukraine that is integrated into the Euro-Atlantic community. Our partnership is rooted in the idea that free citizens should be able to exercise their democratic rights, choose their own destiny, and live in peace. It has been a great honor to serve the American people and a privilege to work in the White House and on the National Security Council. I hope to continue to serve and advance America's national security interests.

I guess, at this stage the United States deserves everything what comes to it. Having people who drive the US towards direct conflict with Russia in US "national security" is a first sign of mental degeneration of US political, military and intelligence institutions. Did I mention that Mr. Vindman... ah, read it yourself:

That doesn't require any additional elaborations. At this stage, after this "revelations" about who and how shapes US foreign so called policy, it becomes clear that the United States caught rabid disease of insanity from Ukraine, but I think it is all for the better for the rest of the world, especially Eurasia, which will be protected from the Empire which is imploding as I type this. The United States has no credibility left no matter what administration, the patients are now fully in charge of the asylum. But then again, there are no other people out there, just the ones who we can observe openly and that is a real wowser.

UPDATE. Ah, Arctic Fox gave me link to NYT on Mr. Vindman, but it was behind pay-wall and I am not paying a dime of my money to this NY rag, but then I heard Laura Ingram commenting on this issue a lo and behold: buried in NYT piece on this American "hero" is the information that this dude advised Ukrainians on how best deal with Rudi Guliani. WTF? This is the guy who serves in NSC staffer position, two steps in command away from National Security Advisor. Wow! I am not 100% sure about espionage charge but isn't there a real conflict of interests for a person who has the highest security clearance allowed in the land? At least that should be a red flag, but since we are getting fuller and fuller, and curioser and curioser, picture of RussiaGate which transformed into the UkraineGate, I wonder when the wrap up will start? Somebody must go behind bars, it is clear now.
Posted by smoothiex12 at 7:58 AM