You may recall few years ago I wrote about them: Icebreakers With Strategic Reach.Today, Russia launched first of them (this will be series) Ivan Papanin (after famous Soviet Polar explorer). Here is how 8,500 tons of displacement looked today. She (rather He) is a beauty (my hat off to guys from Airbase forum, via Admiralty Wharfs).

Yet another step in Russia weaponizing ice-breakers (wink, wink). The so called Arctic Patrol Ship will carry helicopter, artillery complex, manpads and will be able to take on containers for notorious Kalibr missiles. A rather mighty package for escort, monitoring, rescue and, of course, strike functions. These ships are capable of breaking through 1.5 meters thick ice, which is very impressive.  Two of them are under construction but rumor has it that the number will be significantly larger. First two are a test run for a concept as a whole. Follow-on ships may have some parameters tweaked as experience and data begins to flow in. Here is how they will look upon completion: 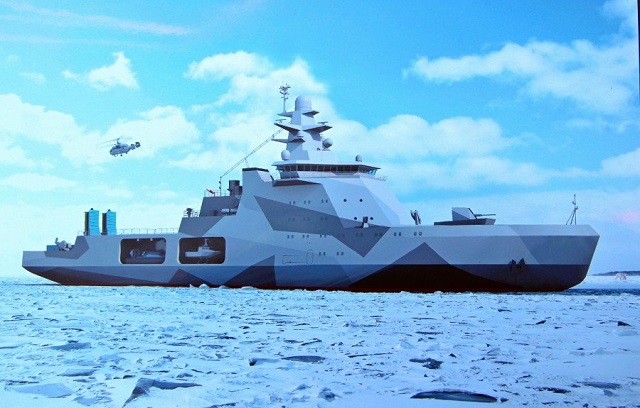 I guess this answers the question where Russia's attention is focused upon. After all, brand new Resonance (Rezonans-NE), over-the-horizon radar, was launched today at Novaya Zemlya (in Russian). This thing tracks and develops targeting against anything, including hypersonic weapons (up to M=20), I will omit here jokes about "stealth". My main question in this situation is this: what is the pay for officers who serve there, not to mention service ratio: is it one year as two plus insane pay rate? To the best of my knowledge there are no good bars or shopping malls there, but sure as hell there is a former nuclear testing ground. So, not exactly family-friendly place this Rogachevo is, especially when polar bears get a party going, but it is totally conceivable that eventually even there one will be able to buy a bottle of Jack without flying out to Arkhangelsk. Just a thought.
Posted by smoothiex12 at 10:03 AM