How "Isolated" One Should Be To...

... produce something of the scale of Russia-Africa (as in whole continent, almost) Summit. Yes, just like that.

SOCHI/MOSCOW (Reuters) - Russia landed two nuclear-capable bombers in South Africa on a training mission on Wednesday, a flight apparently timed to coincide with President Vladimir Putin's opening of a flagship Russia-Africa summit designed to increase Russian influence. The two Tupolev Tu-160 strategic bombers touched down at Waterkloof air force base in Tshwane on Wednesday, the South African National Defence Force said. Russia's Ministry of Defence has said the mission is designed to nurture military ties with South Africa. Speaking before dozens of African heads of state at a two-day summit in the southern Russian city of Sochi, Putin called for trade with African countries to double over the next four to five years and said Moscow had written off African debts to the tune of over $20 billion. 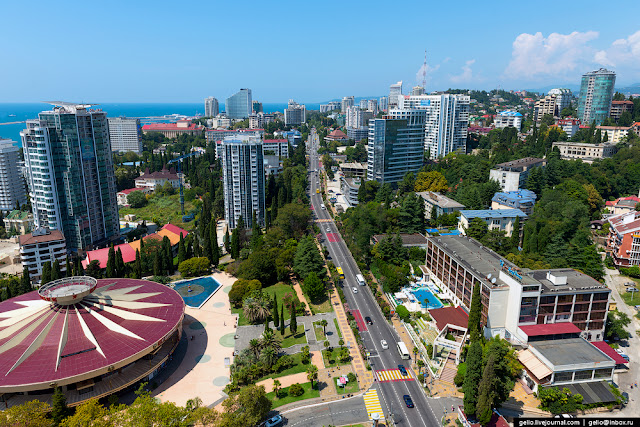 but to get "dozens of African heads of state" at once into what increasingly becomes second state capital of Russia (with St.Petersburg being second one culturally) after Moscow--that is some statement. Obviously Russia is trying to get her influence in Africa "back" to where it was during Soviet times but not quite. USSR did many things in Africa which today wouldn't make much economic sense. This time is different--no support for revolutionary, pseudo-socialist, movements and political parties: nothing personal, just business. Business and capital, money and main capital funds that is, love stability and hate volatility. Russia also loves stability, and so do African countries and interests. Russia's main export product today is stability, which comes in many forms. Such as this, among many:

The rest follows, especially energy in forms ranging from hydroelectric to extremely sophisticated nuclear one, and to field exploration, and then machinery, and then chemical and then... did I mention weapons? Rosoboronexport African portfolio today is $15 billion, but that is just for the start. China, of course, is already well-positioned in Africa, but Russia has a lot to offer to African Continent which will require a very serious industrialization in order to lift itself from poverty.

But the proof is in the pudding, as they say, out of 55 countries of African Union, 43 (forty three) are represented by heads of state, and 11 sent in government ministers or ambassadors. Isn't Russia's isolation wonderful? Well, not in Western media make-believe universe, in which Russia is "isolated" (from the West), but that is all echoes of merciless Kubler-Ross Model, which is known to lay people as an acute butt-hurt by Western, mostly stupid and badly educated, elites and media class. As recent events in Syria showed with Russian-Turkish driven plan giving everyone who needed it  a chance at saving face while developing an actually workable arrangement. What's next? Who knows, I, as I already stated not for once, expect continuation of the "revelation mode" in terms of global security--it is now official that new versions of 3M14 will have a range of 4, 500 kilometers, make your own conclusion of how far Russian cruise missiles can actually fly--and in terms of Russia's economic development, I mean actual economic growth, as in producing more and better, not cooking books. I learned one funny thing, though, about GDP--evidently effective public transportation drags GDP down because fewer cars are produced and bought. Hm. Hypersonic anti-shipping missiles with ranges of 1000 kilometers, then, make one's navy less powerful because they impede production of aircraft carriers. In general, let's face it--modern economic "science" is mostly a trash. Live and learn.
Posted by smoothiex12 at 12:31 PM