They Should Dissolve Most Of US "Higher Education" As Useless...

... Including very many military "educational" and "national security" programs because they are taught by amateurs and people, including from Pentagon, who have no clue of the subject. This is what happens when much of your military history is a fantasy created in Hollywood.

I always talk about it. When elites' "knowledge" of strategy is derived primarily from entertainment (I am sure some in the US State Department believe in the superpowers which Marvel movies show) this is the inevitable result. They still cannot come to grips with the fact that VSU doesn't exist anymore. The Kiev regime begins to draft 22 year old women now and even disabled people. 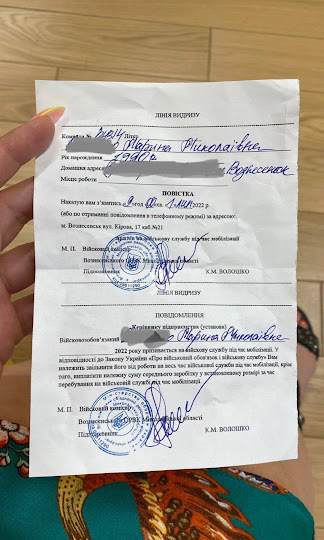 Here is the military draft paper given to one such a girl in Nikolaev area. Now, her relatives are screaming about how this could be. Well, they had no problem with their regime killing people in LDNR for eight years, including shelling kindergartens and maternity wards--deal with it. As per Western so called "elites"--they are human garbage good for nothing, let alone knowing how to fight a real war. But I warned about it for years. Somebody explain to Jake Sullivan or Tony Blinken what real war is. I know they have no clue.
Posted by smoothiex12 at 6:26 PM