Konashenkov today confirmed that several "launchers" of Harpoons have been annihilated by Russian Armed Forces, namely by OTRK Iskander (in Russian). They have been destroyed in Berezan of Odessa Oblast. Here is this Berezan town. 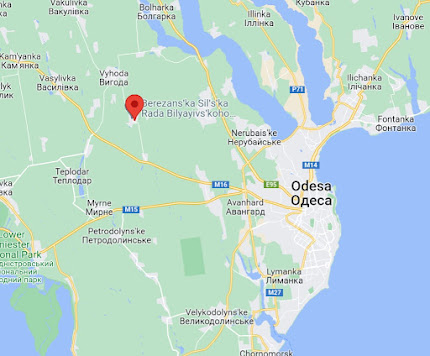 Berezan is located in about five miles from the shore of the Black Sea and it is totally natural for Ukies to move their equipment constantly but it goes without saying that anti-shipping missiles such as Harpoon should be located for launch within reasonable distance from water to "squeeze" as much as possible from their range which is rather very limited--220 kilometers for air launched (AGM-84) Harpoons. Those who watched my video yesterday, with my second comment on the wet dreams of Philip Breedlove, I posted there this illustration of the range to which any Harpoon carrier should get to have a chance at launching at Crimean Bridge). In Russian this is called рубеж пуска (launch line or range) and as you can see--it is not easy to put it mildly. 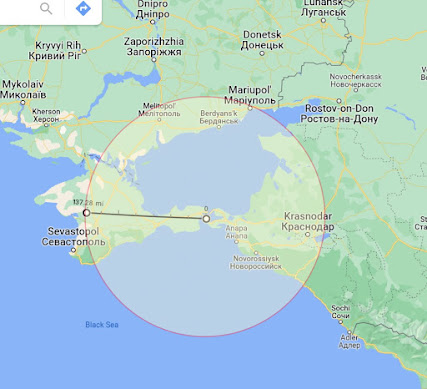 All of this space is totally within Russian or Russia-controlled territory and waters and that leaves pre-positioning areas for those Harpoon launchers naturally within this search area: 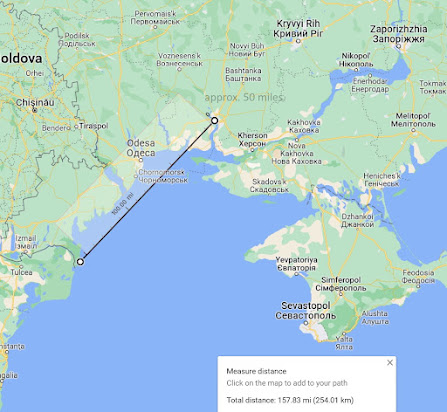 So, we are looking at approximately (and high probability density distribution) 160 x 50 = 8,000 sq. miles area to be searched. It is fairly large but with a number of space-based and signit assets Russia has it is totally possible. That fate also befell many of the US weapons shipped to Ukraine and we are now in the full blown ISR warfare between Russia and the US. US is losing and Russia openly warned about knowledge of US personnel's location both at the front lines and in C2 centers. Wiping them out with high-precision weapons is not difficult. As some of the personnel of LDNR militias says, they know when they face US and UK groups, and I quote, "because they fight better than current VSU and they know how to maneuver, but it is not going to help them." This is from the report by Alexander Kotz.

As I already stated not for once: Pentagon and CIA planners of VSU "offensive" which was to start in early March and was forestalled by Russia launching SMO on 24 February, have miscalculated, again. It is one thing to plan operations against Taliban or Saddam's Army, totally another to plan something against Russian Armed Forces and especially based on ignorance of Russia's military-industrial capability. As I already quoted my good media buddy Colonel Trukhan:"They (Pentagon) are not going to out-think us". Rings especially true on the anniversary of a cataclysmic clash of Soviet and Wehrmacht's armor at Prokhorovka during Kursk Battle in July of 1943. 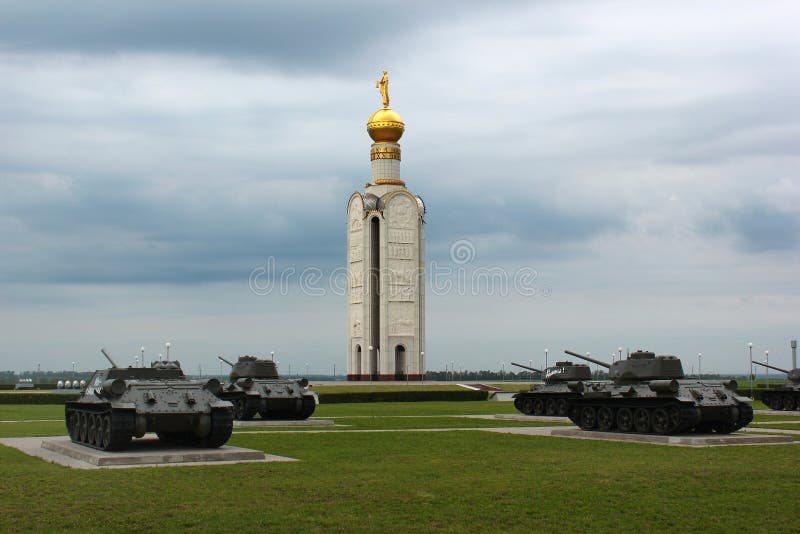 Anyone among those "planners" even bothered to look at the scale and scope of that battle? While one may legitimately challenge History's Channel's numbers, traditionally under-reported for German side, the forces that clashed at Kursk were (per Glantz and House, page 217) 1,337,166 (among them 977,219 combat troops) for the Red Army and 777,000 for Wehrmacht, Red Army tanks: 3,400. Wehrmacht: 2,451. Artillery for the Red Army: 19,794, Wehrmacht: 8,170. Combat aircraft for Red AF: 2,650, Luftwaffe: 2,500. This mass of troops and equipment clashed on July 5 and it all resulted on July 12, 1943 in a cataclysmic event at Prokhorovka. So, the question is: what strategic and operational experience US and UK planners have to face in a form of Russia's General Staff? Right. The answer is obvious. And that is the primer for today.
Posted by smoothiex12 at 11:44 AM