Here is my hour long interview with Bonnie Faulkner of a popular Guns and Butter radio-show.

Russian military and naval analyst, Andrei Martyanov, discusses the dangerous April standoff between Kiev and Moscow and its implications for US/Russian relations; Ukrainian President Volodymyr Zelensky; new Russian weapons; US deployment to the Black Sea cancelled; Russia’s geopolitical, cultural and economic departure from the West; Russian Constitution; US goes to DEFCON 3; a coercion to peace; Russia discards Western payment systems; Russia’s view of the Ukraine; both Biden and Nuland involved in 2014 Ukrainian coup, both are back in power; alliance between Russia and China; scale of US deficiency v Russian firepower; US military nuclear-bias; crisis of financial predatory capitalism; global tectonic change taking place;

It was given in April at the height of the tensions, when 404's military adventurism around LDNR threatened to unleash Russia's firepower which would drive the United States to the wall and into the military-political dead-end from which the United States would have to either go out totally militarily humiliated with the immense geopolitical ramifications for itself, or through the escalation to nuclear threshold and then all bets could be off. Chasing Russians with the de facto demand for summit has been a direct result of April events, which have been even compared to Cuban Missile Crisis by former Russia's President and Prime Minister Dmitry Medvedev. I wouldn't go as far as to compare these two events, but there is no denial that the probability of a direct military confrontation between the United States and Russia was growing. OK, summit has happened, sides expressed enough respect to each-other and, as I quoted former Soviet FM Andrei Gromyko--ten years of negotiations are better than one day of war. When related to the nuclear superpowers such as Russia and the US this is ultimately, 146%, true.

In related news, Lavrov (in Russian) simply ran over UK's FM Dominic Raab, or speaking in diplomatic lingo--beat the shit out of him. Alexander Mercouris thinks that Lavrov chewed him up. No matter how one calls it--Raab (and UK represented by him) have been put in their place. Here is Alexander's take on that:

But I want to remind you what I wrote more than a year ago about Noblesse Oblige in an exclusive superpowers club. Real superpowers in modern times have a very specific way of interaction because of the enormous stakes for the entire world in such an interaction. The United Kingdom is not in this club, not even close and it is time the UK finally faced the fact that it is a second tier-power way out of league of the US, China and Russia. I don't think UK can adjust its discourse but it really doesn't matter for Russia whose main economic anchor in Europe after WW II was always Germany, while UK's place is lower that that of Netherlands. 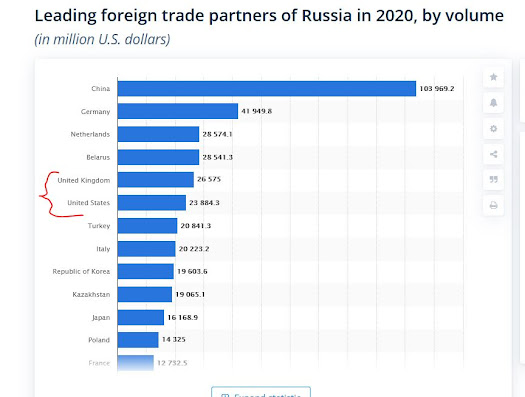 So, let's face it, UK is not THAT important for Russia, while militarily...well, I'll abstain from commenting in order not to rub the salt into the wounds of my many British friends, majority of who are great lads and for a guy, like me, who grew up with British rock-music, comedy and wonderful literature, there is still a lot what could be admired in the UK of the past. So, there we are on this Friday. Enjoy, if you can get through my thick Rrrrusian accent.
Posted by smoothiex12 at 1:43 PM