For the US-Russia summit on June 16. Sergei Lavrov didn't miss a beat when yesterday, speaking at the conference dedicated to the 20th anniversary of Russian-Chinese Treaty on Good Neighborhood, Friendship and Cooperation, stated that:

Sergei Lavrov is not the kind of statesman who uses hyperbole to describe facts of life, but the fact that obvious and undeniable partnership between China and Russia "is more" than just military-strategic alliance tells us all we need to know about the fact that the actual military-strategic alliance is being developed and that has immense geopolitical implications. What kind of implications one may ask. It is one thing to get oneself into the economic alliance akin to EU, totally another--to declare a military one. Immediately, that implies, at some point of time, a unified system of C2 (Command and Control) and unification and even integration of a number operational and tactical manuals and of fighting doctrines. The last one is not as difficult as it may seem between Russia and China, because of a tradition of a military-technological interaction for decades.

For all Chinese achievements in the military-technological field, even a brief look and PLA(N) and its TOE tells us that to a very large degree Chinese military is copied from Soviet/Russian one. But the visual commonality should not obscure a much deeper and more fundamental similarity in fighting doctrine--both Russia and China are what would be called in Pentagonese A2/AD powers. In fact, Chinese arsenal, ranging from Air Defense to anti-ship missiles, to submarines and aviation is a variant of a Russian one. Just to give you some visuals: 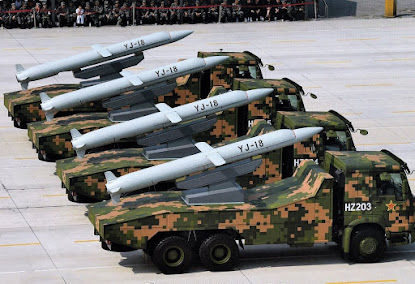 So, you get the point, right? Because of the tactical-technical similarities in weapons it is inevitable that tactically and operationally there are bound to be similarities too. You launch a salvo of missiles against Carrier Battle Group, you need good intelligence and targeting. If Russia is helping China in developing and building a Missile Attack Early Warning System, who is to say that Russia will not provide targeting for Chinese weapons? Liana is already operational and its constellation is being augmented as I type this, China has her own targeting system. This is just a single example. The fact that Russians and Chinese form the mixed units during numerous exercises, including Chinese participation in such monster events as Vostok-2018, to joint air patrols of strategic bombers and their fighter escorts, gives already some clue on what is going on and, as the last week visit of Yang Jiechi to Russia suggests, once one learns about a number of top Chinese military officer accompanying him to Moscow to meet Patrushev, one gets a whiff of a possible synchronization of Russian-Chinese weapons programs within certain "allied" framework. What is this framework, I don't know but in seems to imply that in case of an actual conflict in South China Sea between China and the US, China will have a very substantive military support from Russia, short only of Russians themselves getting involved in hostilities with the US.

This is bad news for the US and Lavrov's words are to forestall any possible spin, which is inevitable in the West, about some kind of "deal" between Putin and Biden, if the summit goes ahead. No deal is possible between the US and Russia and the only benefit from this summit could be some reduction of tensions and stepping from the precipice of a big war. The United States will continue with sabotage and indirect strategies against Russia, while pretending that Russians, somehow, want to join Western fold--which is a product of a sheer delirium in D.C.--but it is what it is. Modern American "elites" are terminal and nothing could be done about them because their condition is not treatable.  Current combined West is only valuable as a market for Russia's goods ranging from hydrocarbons to high value added, for the rest--new iron curtain against degeneracy emanating from the West is highly desirable. Modern Western "values" and values of Russia are irreconcilable on a fundamental level and that is the cold hard fact of life.

P.S. Looks like Sudan did renege on its treaty with Russia on Sudan's PMTO (supply and basing post) for the Russian Navy. Well, not the first time, not the last one. One can still recall Iran abandoning its promises to Russia after, however brief, lifting of sanctions. You all know how that thing went. Sudan's "change of heart" (wink, wink) means merely additional patrols into the Eastern Med by Russia's squadron to "see" what is going on in the Red Sea. Modern (anti-shipping) missiles have incredibly long ranges.