Russia is being damaged as I type this because of millions upon millions of Russians having a severe sudden hernia symptoms due to a Homeric laughter after Mr. Blinken in his remarks "addressed" Russians with the BS of unimaginable proportions, starting at 1:08:00

I mean, there are good medications and treatments available for treating schizophrenia and delusion, but at this stage even that may not be enough to treat a severe case of the US "diplomacy" parading itself as a bunch of ignorant clowns not understanding that Russians are not that stupid. But as great American Mark Twain once stated:

“Never argue with an idiot. They will drag you down to their level and beat you with experience.”

I understand that this sounds very unfair as a blanket statement but US "diplomacy" in general is not a diplomacy--it is a bunch of lawyers who are trained to spew same BS time after time and avoid any substantive answers to anything. Part of it is because they don't know any better. And, yes, Blinken and his ilk they do think that Russians are morons, because they never knew real ones, with the exception of Russian diplomats, and have experience only with fringe Russophobic groups (such as Navalny's org) of freaks who are morons and who supply the US with expertise based entirely on BS. Recall this "intelligence professional" Rebekah Koffler who wouldn't know shit from shinola but still sold, successfully, her comical "knowledge of Russia's strategic culture" to US "intelligence".  No shit, that is why the US finds itself where it is today. Who needs Russian psyops when one has "experts" such as Solzhenitsyn, Koffman, Bezmenov or whoever "advises" Mr. Blinken in State Department on Russia. My question, however, is simple--if they know that they preach BS what is then the level of psychopathy in these people that that can live with this. If, on the other hand, they are true believers I think Russia did absolutely the right thing by putting them against the wall and refusing to hold "secret negotiations" and demanded public answers. Read Mark Twain's quote, you do not argue with idiots.

In related news and approaching Friday. I love this meme from 1970s, because it applies to me fully too)) 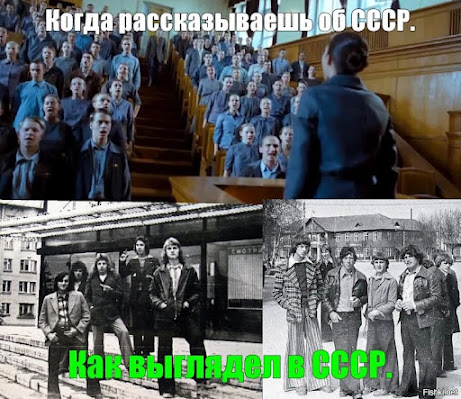 The top: when you tell about the USSR. The bottom: how you actually looked in the USSR. Those bell bottoms, Good God! LOL.