Desperately. In this particular instance the war is more needed on Democrat's side of the isle  due to a variety of reasons, which are:

1. US being caught in the Catch 22 of Russia's "ultimatum" and having no other ideas about how to extricate itself from Ukraine's conundrum;

2. The coming trashing of Democrats at the upcoming mid-terms, aggravated by POTUS' "excellent" rating;

3. With Democrats' agenda imploding as I type this and massive systemic crisis engulfing combined West.

The US, being geopolitically one trick pony, is hell-bent on pushing Russia towards invasion of the country Russians neither want nor need and would prefer NATO (and US with EU) cleaning up and paying for the mess they created in 404. The US desire is so strong that good ol' Joe went on record today.

President Biden addressed the brewing conflict between Russia and Ukraine during a press briefing Wednesday, saying of Russian President Vladimir Putin, "my guess is he will move in."

Of course,  it remains a matter of speculation on what conflict POTUS had in mind (maybe he meant China and Taiwan, or whatever), but the truth is--Washington  is desperate. So much so that it continues to issue empty threats promising Russia a "catastrophe" and even forbidding Russia any operations with the US Dollar (in Russian). I slowly reach for a pop-corn bucket.  Not to be outdone, of course, are all kinds of professional abusers of legislative positions such as Connecticut Democrat Chris Murphy promising:

Sen. Chris Murphy appeared Tuesday on Anderson Cooper 360, where the Connecticut Democrat addressed the growing tensions between Russia and Ukraine, with Russia now reportedly having hundreds of thousands of troops posted at the Ukrainian border. Though Russia invaded Crimea, a pro-Russia area of Ukraine, in 2014 with little pushback, Murphy said things would go much differently if Russian President Vladimir Putin were to invade. “There is going to be continued U.S. assistance, assistance to an army that’s ready to fight and a population that is not just going to let Russia march into the center of Ukraine,” Murphy said. “Putin seems to be getting absolutely horrible advice. People telling him he is going to be greeted as some kind of liberator in a country that has turned against Russia over the last 10 years and is going to fight for its survival.”

Well, for starters you can look up this Senator's biography filled with studies of combined arms operations, deployments into operational zones, degrees in weapon system integrations... Ah, wait, I am screwing with you. Senator's pathos about "army that's ready to fight" and, especially, which is funny, about population are the occasions on which I always like to enroll the help from Sergei Victorovich Lavrov: 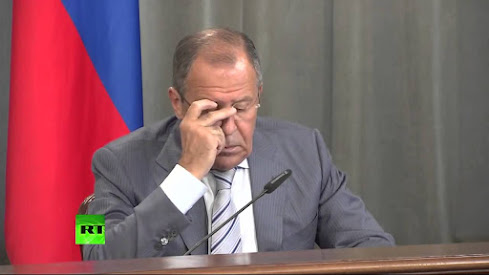 because at this stage one has to ask a question: how else these people want to embarrass their own country by the virtue of them being elected to the positions they are utterly unqualified for? They literally have no grasp of the reality, especially economic one (forget military--it is impossible to explain to average US politician what it is) outside of their constituency. But hey, what do I know. People continue to ask me to comment on this or that statement or talking by one or the other American "expert" on Russia. Read my lips: bar some few exceptions, US academe, including those who specialize in Russia are not experts. They are narrative-mongers, majority of who have no serious skills, background nor experience in anything they try to "analyze" about Russia--this problem is systemic and is due to a complete corruption of the America's education, especially history and military history and over-saturation of the American body-politic by people without any serious education or lawyers. It is literally the situation of auto-mechanic with vocational school performing an open heart surgery and thinking that he knows what he is doing. You can easily predict the result, for a patient.
Posted by smoothiex12 at 7:46 PM