First point is a squealing of Turkish assets once their balls are placed in the vice of real geopolitics and real military power. As Azeri news agency Haqqin (Time) reports:

Translation: The chairman of the Turan party, Jahandar Bayoglu, called for the removal of all pro-Russian officials from power in Azerbaijan. According to him, the country should take this step in order to protect itself from external influences. The politician stressed that it is necessary to take control and remove from the leadership of all pro-Russian officials, deputies and heads of public organizations. The party chairman called on the head of state to dissolve the Milli Mejlis and start new socio-economic reforms. Bayoglu believes that if the country's leadership does not take these decisive steps, then the events that are taking place in Kazakhstan may repeat in Azerbaijan. He added that pro-Russian forces have infiltrated the structures of the Ministry of Internal Affairs, the State Security Service and the Ministry of Defense. The politician also called for the completion of the transition of the Azerbaijani army to the model of the Turkish army as soon as possible.

Aw, how cute)) I have news for this Turan dude, the first pro-Russian official in Azerbaijan is its President Ilham Aliev who is a good friend of Vladimir Putin and, unlike Erdogan, is extremely well-educated and cultured man who understands the real score. And there is a lot to this score what Bayoglu doesn't understand precisely because he is the leader of Turan party. I will omit here elaboration of a fallacy of pan-Turkism but, of course, events in Kazakhstan just all but killed this idea in every practical sense and it is not only Ankara which cries now, there are very many people in London who, yet again, discovered that contrived geopolitical concepts mean very little if you are not a superpower. UK is NOT a superpower, it is a second rate power which still suffers from phantom pains of once greatness which is no more. They better learn and internalize this fact both at Downing Street 10 and at Hanslope Park. The sun has set on your empire, just live with it.

Translation: NATO has to pack up its things and move back to the borders of 1997.

I know, it hurts, there will be (already, actually) many pompous statements from the likes of Tony Blinken or Jens Stoltenberg but, thanks to Bernhard of Moon of Alabama who posted brilliant Michael Brenner's piece on US foreign policy, it is totally warranted to present what one of very few true American foreign policy experts writes about the mental state of US "elites".

U.S. engagements in the world over the past 20 years reveal a grim record of failed ventures. Most have been caused by unrealistic goals, blinkered views of the field of action, overweening pride, an ignorance of foreign places and their history, and an unseemly readiness to take complacent comfort in fantasy worlds that exist only in its own imagination. In short, American foreign policy has been misguided – badly and consistently misguided. The inevitable frustrations and failures owe equally to sheer incompetence. An endless string of errors – diplomatic, military and political – is as difficult for the nation to reconcile with its ‘can-do’ self-image as is the admission of the glaring discrepancy between the belief in the country’s providential mission and its increasingly evident ordinariness.

This is another salient point Brenner makes:

Americanism provides a Unified Field Theory of self-identity, collective enterprise, and the Republic’s enduring meaning. When one element is felt to be in jeopardy, the integrity of the whole edifice becomes vulnerable. In the past, American mythology energized the country in ways that helped it to thrive. Today, it is a dangerous hallucinogen that traps Americans in a time warp more and more distant from reality. There is a muted reflection of this strained condition in the evident truth that Americans have become an insecure people. They grow increasingly anxious about who they are, what they are worth and what life will be like down the road. This is an individual and collective phenomenon. They are related insofar as self-identity and self-esteem are bound up with the civic religion of Americanism. To a considerable degree, it’s been like this since the very beginning. A country that was “born against history” had no past to define and shape the present. A country that was born against tradition had no rooted and common sense of meaning and value that cut deeply into the national psyche. A country that was born against inherited place and position left each individual at once free to acquire status and obliged to do so for insignia of rank were few.

This is an excellent definition of the underlying causes for the American "exceptionlaism" which is an obverse side of insecurity. I write about it non-stop for decades, really. My first book is almost entirely built around this premise. Reality, like gravity, is a bitch--no number of narratives by ignorant and uneducated American journos can obfuscate it without creation of a serious nation-wide cognitive dissonance which inevitably translated into the psychological, if not psychiatric, disorders on a massive scale. Reality will inevitably bite into one's ass no matter how one tries to construct own alternative "reality". Will see how it will go in Geneva tomorrow but Ryabkov was actually very upbeat today about preliminary talks, meaning dinner, (in Russian). We'll see. Geneva is just a start, Russia is not interested in humiliating the US at this stage (the US does a swell job on its own) and still leaves an honorable, face-saving exit for the US, which, in the end could be presented as a triumph of common sense and superpowers working together. For the US internally it could play well against the background of upcoming mid-terms and a serious economic downturn.

If not, well--chose on your own pawns which will be removed form the "chess board" by Russia and what new weapon systems will be announced and deployed without leaving NATO any option but to capitulate. But that is the food for thought for tomorrow. This is just a part of the VTA's IL-76s yesterday, at some point of time during the day, in Alma-Ata airport alone. 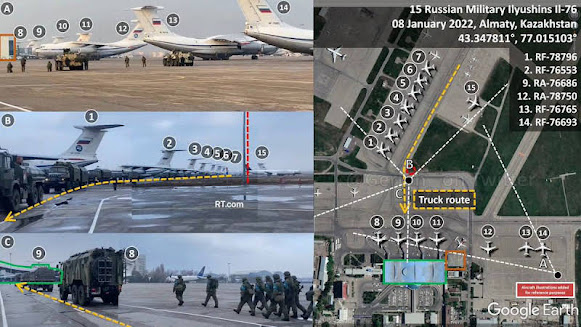 As you all know VTA was also transporting ODKB forces to other Kazakh cities, so make your own conclusions on Russia's air mobility capability. Giant AN-124s are not even shown here, while they were also actively involved in deployment of ODKB forces.
224th Flight Detachment of Russian Defense Ministry, which operates those giants, has 8 of them at its disposal. Single An-124 can, well, just get acquainted here with what cargo can a single 124 take on-board, and keep in mind that its can also take some number of paratroopers in its pressurized compartments. Most of VDV personnel is carried by IL-76s. Those who had to, they got the message.
Posted by smoothiex12 at 2:53 PM