A little bit of military porn. And it goes well with Douglas Macgregor's recent revelations (they are revelations for those who watched too much of US military propaganda in 1990s and 2000s and missed the revolution). Here is one of the points I try to explain for the last many years: Russia has two types of Air Defense. One type is what is called objects Air and Anti-Missile Defense (aka Voiska PVO-PRO) and it is the AD which guards industrial, civilian and military objects--industrial plant, administrative infrastructure, military installations and HQs--and then there is Troops' Air Defense, which is quite different. This AD, unlike Voiska PVO-PRO which belong to Russia's VKS (Air-Space Forces), are known as PVO SV (Air Defense of Ground Troops) is a branch of the Army and their task is to defend Russian Land Forces.

This is not to say that these two Air Defense are not interconnected--they are, but Voiska PVO-PRO are not designed to deploy with the either advancing or retreating troops, PVO SV is and that is why you see not only somewhat different AD technology (PVO SV also has anti-missile capabilities) but all of it is primarily based on tracked vehicles, such as what would pass in the US for SHORAD the venerable and ever updating Tunguska. 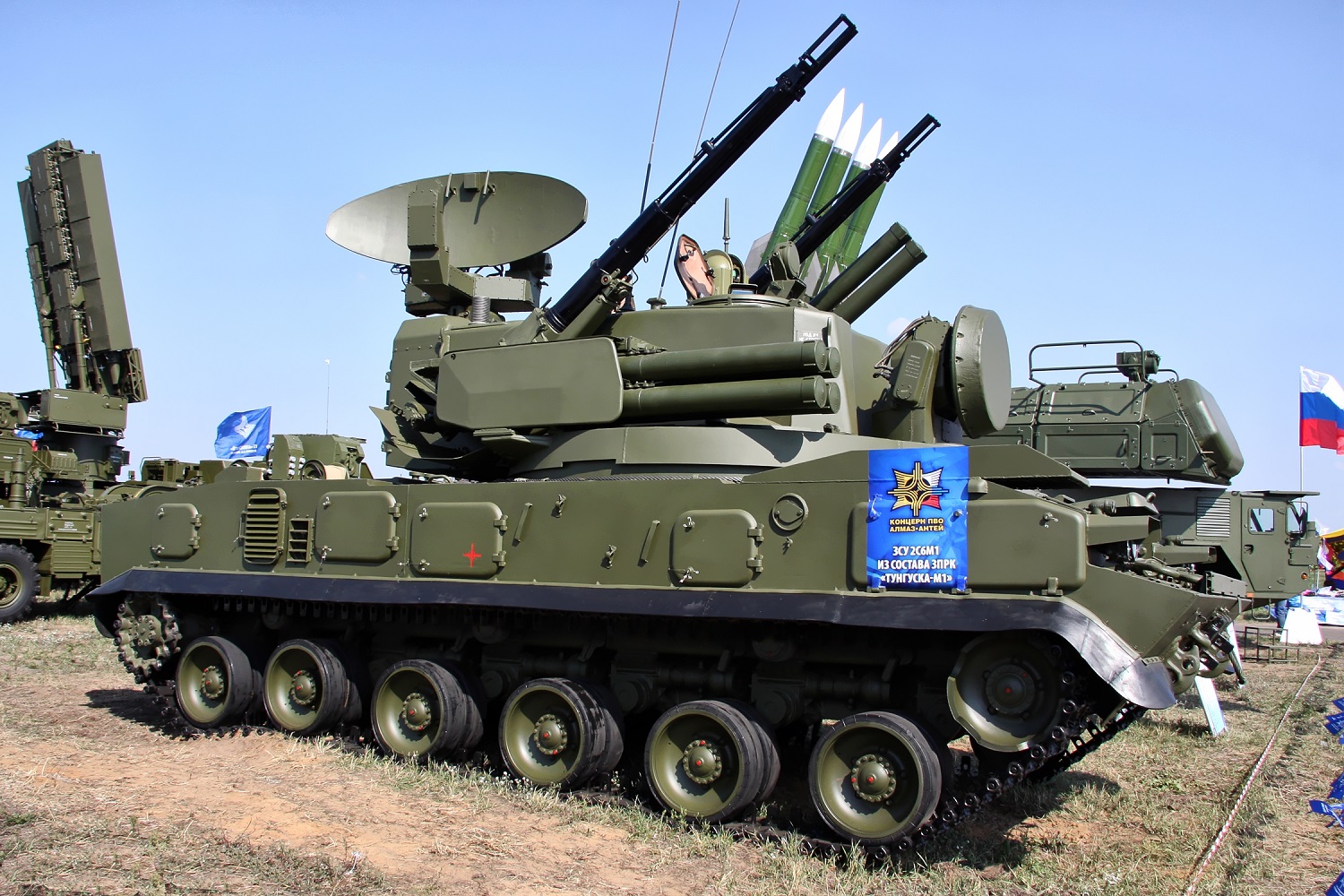 But this is where the similarity with the US ground forces ends. No doubt, military purists may contend that, say, US Patriot and THAAD batteries ALSO could be viewed as a form of troops PVO. Well, maybe, the problem (for the US forces), however, is in the fact that what Russia's PVO SV provides in short-to-medium range protection for ground forces is simply mind-boggling. TOR-M2 alone is a formidable system, but when "plugged" into the combat network which apart from Tunguska and TOR involves a medium range BUK-M3, it provides and outstanding coverage for Brigade and division size formations against any targets (do not forget long-range AD and ABM complexes such as S-300V4).

In it you can see all the above-mentioned systems of PVO SV, but this is not what is important. In apparent Christmas present to PVO SV and, by default, to Russia's ground forces this news has gone unnoticed in the West but it shouldn't have.

Translation: simultaneously we develop a modification of ZRPK Pantsir-SM-SV on tracked vehicle for Ground Troops and Airborne Troops. The complex will have two types of missiles and will have an extended kill range. Both jobs are planned to be completed in 2022. For the immediate front-line AD the new missile system Ptitselov (Bird Catcher) is being developed, with two types of missiles (infra-red and laser-guided).

That is something, because Pantsir (especially with new capability of detection range of up to 70 km and missile range of 40 km) gave a lot of grief both to Israel and the US, being able to intercept a bulk of standoff and precision-guided weapons ranging from TLAMs (rumor has it JASSMs too, wink-wink) to all kinds of Israeli missiles and it goes without saying that appearance of such a system combined with already impressive TOR-M2 and BUK-M3 creates a completely new tactical and operational reality for ground forces. Not only Russian ones, for the ground forces of the enemy. There is nothing in the combined West which can even remotely challenge such air defenses, despite some attempts, such as France's Crotale. But in the end, Russia's capability to see, detect, track and develop distributed firing solution within the networks against any aerial target is simply unmatched. Single Polyana-D4M1 can tie into a single network up to 14 separate AD (systems) nodes and create a "through" channel either to a same level network or to higher ones, up to the very top of VNTZUO. I assume latest Polyanas have even greater capability and even the layout differs from those of earlier 2010s versions, not to speak of versions from 1990s.

So, why did I bring Douglas Macgregor here. Here is why. In his article in TAC, which being discussed widely, he states:

Reality is sitting on Ukraine’s eastern border, not in the South China Sea or in the strait of Taiwan, and there is ostensibly nothing Washington can do about it. The questions that should concern Washington’s political class are: Will NATO survive its ignominious retreat in the face of superior Russian military power? And, why is Washington conducting policy not from strength, but from weakness—a weakness thus far disguised by the outward show of military power against weak opponents without armies, air defenses, or air forces?

Macgregor is on record with this conclusion, especially highlighted part, but so am I, trying to explain for years now that the issue is very simple--US Armed Forces never fought the enemy which can not only defeat them, but completely shut down the skies for the US main power tool--its Air Force and standoff weaponry. Once this is removed from the equation, annihilation of the opposing force is just the matter of Russia's own standoff arsenal and then mopping up by the ground forces which will retain their combat effectiveness even against most advanced and massive attacks from the air. It is, obviously, impossible to explain to neocons infesting corridors of high power in D.C. and who made their careers both in Pentagon and State Department by writing theses on Peloponnesian Wars and deriving "lessons" from swords, shields and bow and arrows armed cohorts slaughtering each-other more than 2,000 years ago, that those do not apply for machine speed operating combat networks and weapons which can hit not just to tactical and operational depths, but can, actually, reach easily the United States proper.  And that is a big, big difference.

Per Admiral Chabanenko. Some more details continue to trickle in--yes, it is going to be 3M22 carrier, as well as Otvet ASW missiles plus X-35, plus 3M14 (in Russian). 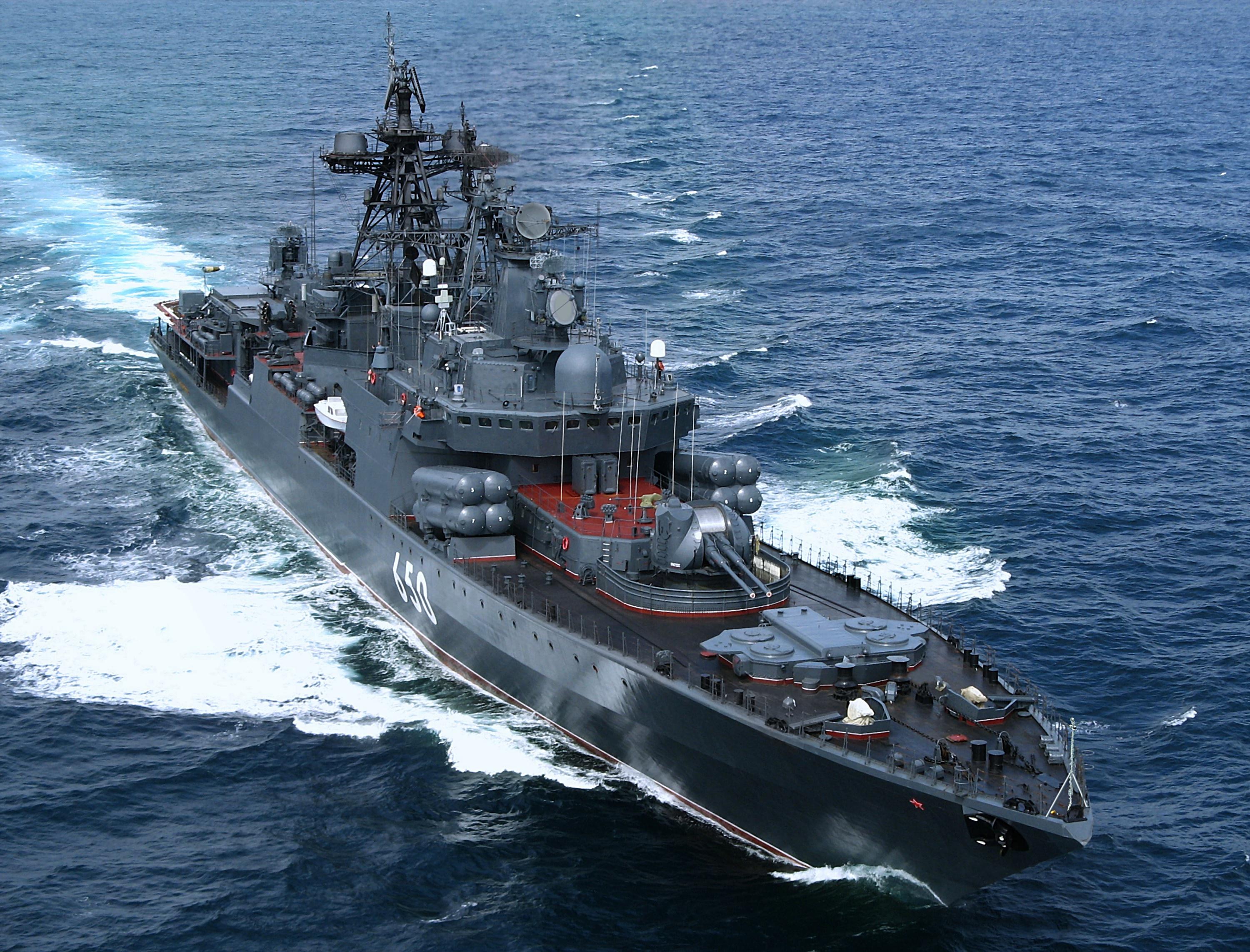 What will be done to its AD I don't know. But, obviously, 8 launchers of P-270 Moskit (SS-N-22 Sunburn) will be removed and in their place 8 containers with X-35 will be installed, similar to Marshal Shaposhnikov's upgrade. But Chabanenko was different in many respects from classic 1155 Udaloys since it carried a strike missile complex from the outset and was a dedicated SuWa ship. So, will see where it will lead to. Meanwhile Admiral Vinogradov is also in the full refit and that will be a clone of Shaposhnikov upon completion. And that too is a big, big difference. Especially with Zircon already in serial production.
Posted by smoothiex12 at 7:28 PM