Vladimir Putin was explicit a couple of days ago, couldn't get more straight that this, I'll remind you, him verbatim:

I repeat: the rise in gas prices in Europe was the result of a shortage of electricity, and not vice versa. And there is no need, as they say, to shift from a sore head to a healthy one, as we say, as some of our partners try to do. Sometimes you listen to what is being said about this, and you are surprised, it’s just amazing, as if they don’t see the numbers - I’ll say more about this - they don’t see the reality, they just cover up their own mistakes. Over the past decade, step by step, systemic flaws have been laid in European energy. It was they who led to a large-scale market crisis in Europe. Let me remind you that as long as the leading positions were atomic and gas generation, there were no such crises, there was nowhere for them to come from. I will add that today, thank God, such problems in Russia are unimaginable. A long-term approach to the development of the fuel and energy complex allows us to provide electricity prices for the population and enterprises at the lowest level in Europe. For comparison: the average price of electricity in Russia in terms of euros is about 20 euros per megawatt-hour, in Lithuania - 256, in Germany and France - 300, in the UK - 320.

Yet, as Reuters reports two days ago:

BEIJING (Reuters) - China's energy crisis deepened on Friday as cold weather swept into much of the country and power plants scrambled to stock up on coal, sending prices of the fuel to record highs. Electricity demand to heat homes and offices is expected to soar this week as strong cold winds move down from northern China. Forecasters predict average temperatures in some central and eastern regions could fall by as much as 16 degrees Celsius in the next 2-3 days. Shortages of coal, high fuel prices and booming post-pandemic industrial demand have sparked widespread power shortages in the world's second-largest economy. Rationing has already been in place in at least 17 of mainland China's more than 30 regions since September, forcing some factories to suspend production and disrupting supply chains.

Obviously, the author of the piece, granted her Indian origin (Shivani Singh) and, evidently, experience in reporting on Hollywood, still cannot reconcile herself to the fact that China's economy dwarfs US economy, not to speak of others, and is the largest economy in the world by far. But we will forgive her ignorance and concentrate on the essence and here is where China's economic disproportions begin to manifest themselves. Yes, China's economy is monstrous but that where the problem is--it grew too fast too much dragging with itself all ills of an explosive development including inability to resolve her energy needs in a proper way. Here is Reutres'  map of severe power outages in China for the end of this September. 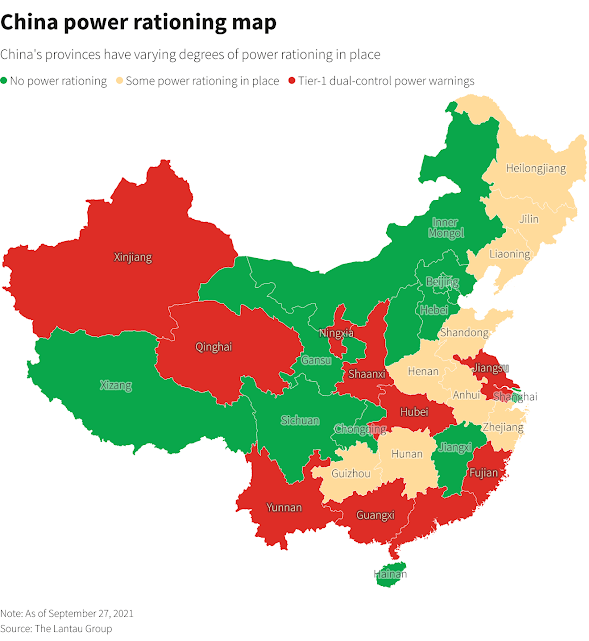 If that wasn't bad enough, Chinese made this statement:

China will strive to achieve carbon peaks by 2030, Vice Premier Han Zheng said in a video message at the Russian Energy Week International Forum, according to state-run news agency Xinhua late on Thursday. He also said that China and Russia are important forces leading the energy transition and they should cooperate and ensure smooth progress of major oil and gas pipeline and nuclear power projects.

Well, there is certainly transition by Russia which develops nuclear technologies and power as if there is no tomorrow, same goes with Russia developing her already immense natural gas pumping and processing infrastructure, including really becoming a shipbuilding superpower. Not only Russia builds those massive LNG carriers, but have you seen what Russia builds in Arctic now? It is a monstrous shipyard in Belokamenka which will build concrete floating LNG and oil processing plants. World barely talks about it, but the scale of the thing is gigantic:

A variety of buildings, facilities, and dock make up a new skyline like the Russian north has never seen before. Once a sleepy village, the Belokamenka (Russian for “the White stone”) is nowadays the busiest industrial construction site anywhere in the circumpolar north. Over 100 companies are involved in creating what will be the LNG  Construction Center, operated by Russian private natural gas producer Novatek. Few of the workers are from Murmansk. Some are from China, many are from Central Asian former Soviet republics, and some are from southern Russia. Although far from completed, work on fabricating the gravity-based structure for the liquefaction facility for Train 1 as part of Arctic LNG 2 project has already started in the main dock. The giant modular structures with the high-tech factories will, when ready, be towed from Belokamenka across the Barents- and Kara Seas to the coast of the Gydan Peninsula in Ob Bay in Siberia. Here, the production of liquified natural gas (LNG) will start in 2023. A year later, in 2024, Train 2 will start production, while the final Train 3 is set to start operation in 2026. Each of the three trains will have a production capacity of 6,6 million tons per year. The gas supply to the plants comes from Novatek’s Geofizicheskoye and Salmanovskoye fields. 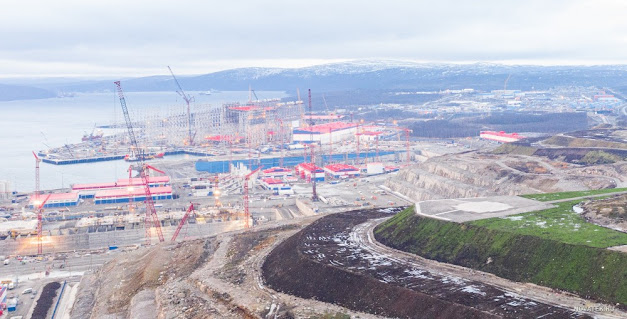 So, yes, Russia is preparing energy transition, alright, but not the one totalitarian "Green" cult has in mind. You know why? Here are Chinese coal futures:

Oh baby, almost three-fold growth since February last year. I am sure "investors" are happy. I need a pop-corn at this stage. That is why I always talk with caveat about China's superpowerdom--it has to come with the balancing act between what is needed and what is possible. But then again, allow me to remind my other table I compiled recently. Remember?

Repeat after me: modern economy, which means productive industries, is energy, economy is energy... Solar and wind are good for wet dreams of EU and US politicos, real world which doesn't want to see its people going hungry, cold (or hot), without proper sanitation, without proper transportation, documentation, conflation, taxation, sedation, playstation, workstation, citation, representation... well, I got carried away here a bit, but you get my idea--all that requires an enormous amount of energy. Because Human Civilization and Energy are one and the same. Remember Kardashev and his famous scale?

What's the deal with those Russians, they love their energy. But then again, who is Kardashev with his illustrious career in astrophysics and astronomy. What does he really know? Ask Greta Thunberg, she'll tell you, with the help of Al Gore, a political shyster with degree in... journalism. Even Wiki notes:

Gore was an avid reader who fell in love with scientific and mathematical theories, but he did not do well in science classes and avoided taking math. During his first two years, his grades placed him in the lower one-fifth of his class. During his sophomore year, he reportedly spent much of his time watching television, shooting pool and occasionally smoking marijuana. In his junior and senior years, he became more involved with his studies, earning As and Bs. In his senior year, he took a class with oceanographer and global warming theorist Roger Revelle, who sparked Gore's interest in global warming and other environmental issues. Gore earned an A on his thesis, "The Impact of Television on the Conduct of the Presidency, 1947–1969", and graduated with an A.B. cum laude in June 1969.

A perfect, really match made in heaven, combination of "solid" (pseudo) science and publicity stunts. Evidently Chinese followed this primrose path. Boy, are they paying now and there is nothing funny about it. But that is one of the great exhibits of reasons for why the AUKUS was conceived and why the United States is so interested in interdicting China's Indian Ocean SLOCs which supply huge amounts of energy to China. Such an interdiction will assure a collapse of China's economy. Well, Russia, like a good neighbor is always there (sorry State Farm Insurance for using your slogan). It is a huge game, it is not just about managing Western World's departure and, hopefully, its soft landing. It is not even about multipolarity which is a fait accompli for years now. No, it is about the future of human civilization and a real transition towards more just, freer and promising world. We, as humanity, still have to expand into space on a permanent basis and start mining for its riches. Remember that other Russian who said this:

The Earth is the cradle of humanity, but mankind cannot stay in the cradle forever.

But that is exactly what Western "elites" want us to do--arrest real development. But then again, intellectually they are pygmies (am I non-PC towards pygmies?), so they don't know any better.

MOSCOW, May 22. /TASS/. The first mission of Russia’s nuclear-powered transport and energy module, Zeus, will last 50 months, Roscosmos Executive Director for Long-Term Programs and Science Alexander Bloshenko told reporters on Saturday. "The combined duration of the mission is 50 months," he said during the New Knowledge forum. He went on to say that the first flight has been scheduled for 2030. "Together with the Russian Academy of Sciences, were are now making calculations about this flight’s ballistics and payload," he said. According to Bloshenko, the space tug will first approach the Moon, where a spacecraft will separate from it. After that, it will head to Venus to perform a gravity assist maneuver and deliver another spacecraft. Then, it will depart towards Jupiter and one of its satellites.

I wonder if we can build wind generators at Venus--I heard it blows there big time. But I am sure Greta, Al Gore and New York Times will have objections to that, after all--those poor Venusians, wink, wink.