Why They Are Nervous. Short Excurse Into the Modern War. Part 4.

Now to the most important part. Recall what I wrote about ASW and missile attack in the previous three posts? Now forget it all because today it matters only under some extremely limited circumstances. Here is a simple illustration about CBG's relative scale to modern ranges. 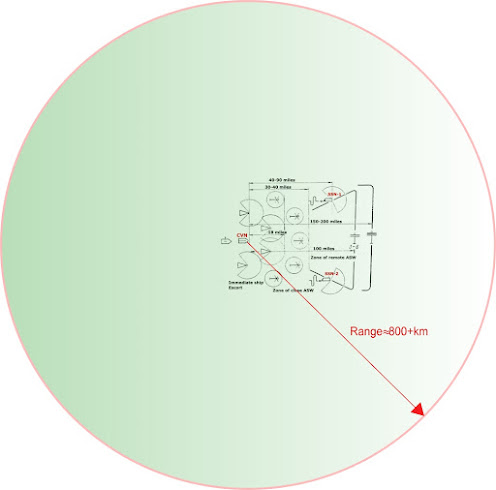 In this case, as you can easily see, it really doesn't matter how you configure your ASW for CBG, we don't even talk about a group of ships on their own, with only MH-60R Seahawks as air ASW assets at their disposal. Those are magnificent and advanced machines but their problem for modern ocean-wide warfare is the fact that they have a speed of 270 kilometers per hour and a maximum range of 830 kilometers, that is the range at which they can fly in ASW configuration in a straight line, but as you can already surmise, ASW is a very energy costly affair (with all this hovering and dipping at the Datum), granted that this Datum is (was) provided by good ol' Soviet Charlie-IIs and Malakhits.

This time is over. Introduction of P-700 Granit with its range of 600 kilometers and fully networked salvo of these missiles in early 1980s was the thing which finally transferred ocean warfare from a combination of ASW and Air Defense to almost strictly Air Defense problem, granted huge Project 949A (Oscar-IIs) SSGNs could be tracked by the US SSNs at the ranges beyond CBG's ASW ranges. Sometimes they could track Oscars, sometimes they couldn't. But there was one thingy about those pesky P-700 Granits--unlike with Malakhits and other older anti-shipping missiles, there were a significant chances to miss a Flaming Datum when Oscars launched their Grantis. Once they were airborne it was entirely up to E-2 Hawkeyes to detect such a salvo and vector on-duty F-18s and F-14s for an intercept. Let's fast forward a bit, P-800 Onyx emerges and while officially its range is 660 kilometers, it is a much more advanced missile and its latest versions are reported to have a range in excess of 800 kilometers and speeds in excess of Mach=3. Look above at the illustration. What's left then? How to deal with this threat? Right--one needs Aegis and Standard missiles which theoretically can handle a salvo of...P-700 Granits. Theoretically.

But P-700s are old missiles, what are you going to do against Onyx with submerged start? Welcome to a missile exchange paradigm and welcome to Salvo Equations. But since we discuss a real war not some fanboys' rah-rah bullshit from Popular Mechanics or Forbes, we have to recall that the war is a probabilistic event. So, what are, then, ways both warring sides approach and tackle this problem? Remarkably they are very similar because the same math and physics is used. For a commanding officer of ANY sub in the world carrying anti-shipping (or even TLAM) missiles the first thing which comes to mind is the assessment of Probability of a Success of whatever his sub is going to do, in our particular case--shooting and destroying a surface target(s).  In old times poor lads and their navigator and weps guys would calculate this probability by hand, by calculators etc. Until Combat Informational Control Systems or Battle Management Systems (Computers) which started to appear in their advanced forms precisely starting from the times mentioned many times before Charlies started to deploy, they started to calculate those probabilities based on the fusion of incoming data ranging from targeting to tactical and operational data from many sources (sonar, comms, visual, radar etc.).

As we all know from the basic probability course, the probability of just about any event is calculated by multiplying probabilities of many related events which must occur in order for us to have a shot at achieving what we set to achieve.

As you can see yourself a lot has to be done to kill a target. Even if you have a probability of detecting a target Pdetection =0.95, and the reliability of our targeting Ptargeting=0.95 and we have a probability of remaining undetected by enemy equaling 0.9 and whatever other probabilities factor in our probability of killing our target Pn=0.9, we will get: Pkill= 0.95 x 0.95 x 0.9 x 0.9 = 0.731. These are not the best chances but they are solid. We would love our chances to be within 0.9-0.99 (wink, wink) range. So, how do we increase our chances? Range and speed and excellent combat training.
Once tactical characteristics of 3M22 Zircon have been confirmed, a man, who unlike me has an impeccable background in submarine warfare, Captain 1st Rank Igor Kurdin, who is usually very reserved about weapons, went on record:

Translation: “The range of the Zircon is from 500 to 1000 kilometers. From such a distance, no one will spot our submarine, unless they have been tracking it for a long time and purposefully, "said the chairman of the St. Petersburg Navy Submariners' Club, Captain 1st Rank Igor Kurdin. The interlocutor recalled that the task of the American anti-submarine forces is to detect our nuclear submarine before it launches missile launches. “The hypersonic speed suggests that once the Zircon is launched it is almost impossible to destroy,” he added.

We look again at the illustration in the beginning of this post and take in the range of 800 km. If such a range is viewed for regular Onyx with its varying speed on the flight path in excess of Mach=1.5-2.0 with acceleration to M=3.0 at the terminal, we are looking at the average velocity of M=2.0, which gives us Time = 800 km/2450 km/hr = 0.32 of an hour or roughly 19-20 minutes. With Zircon and its average of Mach=9 we are looking at 800/11025= 0.072 of an hour, which is around 4 minutes. No system can react to this, nor there are any air defense means which can intercept such a missile in any quarters, be it head on or, let alone, in pursuit, granted it is even detected, not to speak of a Datum which may stop being a Flaming one. This is for only one 3M22, when they fly in salvo of 2 or more...take a guess.  It comes down to merely reliability of missile itself, its ability to perform strictly on its technical merit which defines the probability of a kill. Here is what I wrote three years ago in my book:

A going and reasonable assumption today in regard to the latest anti-shipping hyper-sonic weapons is that the probability of intercept of such weapons, capable of Mach=9+, well in excess of any existing anti-missile weapons, even without maneuvering on terminal approach, is statistically insignificant. That is, in a basic Salvo Model for the losses of attacked force:

Where b1 is staying power of ships in enemy force B, which is the number of the missiles required to take out of action those respective ships. It takes a single missile of such a class to put any large combatant, with the possible exception of a nuclear aircraft carrier, completely out of action, thus making b1 =1. Coefficient b3 denotes a defensive power of the ships in B, which is the number of good enemy shots which will be destroyed or deflected by the defender—there is really no objective evidence of modern AD systems being capable of intercepting hyper sonic missiles. This makes b3 = 0 and, consequently, makes the multiple of b3 B = 0 ; this is a definition of a turkey shoot, in which the attrition ΔB of the opposing force, depends strictly on a number of hyper sonic missiles in A’s salvo at B. In other words, the equation is reduced to:

because  b1 =1 Alpha (α ) denotes the striking power of A, which is the number of missiles which would hit the target if there were no defense. There is no defense currently and this effectively eliminates B as a player in case of a missile exchange with A, thus making the exchange mostly a matter of reliability of missiles themselves.

We will review those salvo transformations later, but for now a juicy piece of math with formula for a salvo by a group of subs, or missile carriers on the surface, just tweak some coefficients. 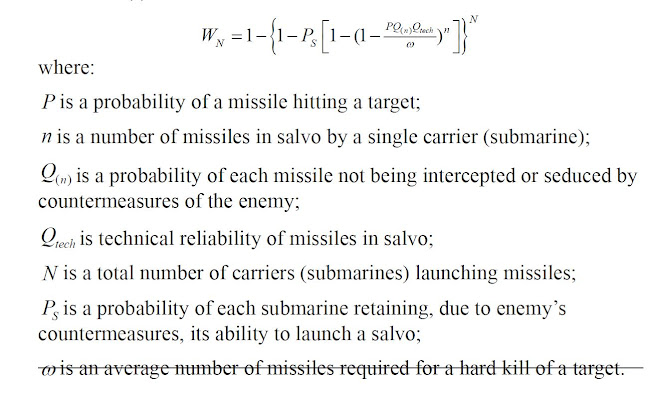 Pay attention to both Qs. You can easily find the textbook The Submarine Tactics by Captain 1st Rank Khvosh in Russian and, of course, intellectual tour-de-force by legendary late Captain Wayne Hughes and his Fleet Tactics and Coastal Combat.
To be continued...
Posted by smoothiex12 at 6:23 PM