Why They Are Nervous. Short Excurse Into the Modern War. Part 2.

Now, since there was a consensus on me continuing with this ASW thingy, immediately--THE clarification. On the illustration with circles-ranges of Russian subs along the Atlantic coast of the United States (in the previous post) we view the situation from the point of view of the known position (and even Flaming Datum, which IS discovering sub's position by it blowing its cover) and immediately can draw circle-ranges and, in reality, this is how those aggressive humanity-hating, vodka-drinking Russkies will see the map. Not so in Pentagon. Before ANY salvo and, consequently, Flaming Datum (and even this must be discussed with some huge caveats), what American ASW people will see before the hostilities start will be this ugly picture. 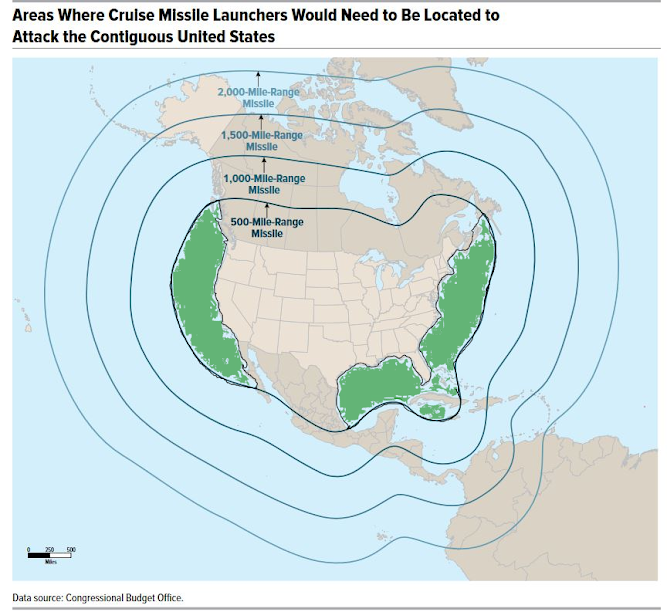 No circles here but only green shaded areas limited by a range of 500 nautical miles. I believe CBO from where the template is taken meant 500 regular miles, but let's assume that these are nautical miles which gives us 1.852 x 500 = 926 kilometers, precisely the range at which 3M22 could be launched in case of (God forbids) war. So, you may continue to mentally fill all those ranges with green thus reaching, eventually 2,000 miles range and beyond where latest mods of 3M14M with the range of 4,500 kilometers could be launched.

So, looking at this green mess one has to asks a question of how many and where those Zircon-carriers are. If there is no war, but it already begins to smell funny in the air, the only thing you can do is to "pack" these green areas with all available ASW assets without losing readiness for war. Well, while ships in ASW role are fine and dandy, they really are not that great if it comes down to a colossal area such as shown on both coasts. Modern submarine will hear those guys way earlier than they will be able to detect them, and, considering today astonishing advancements in quieting and an "open" water theater both at the Pacific and Atlantic coasts, the sub will simply avoid detection by maneuvering. So, call Jacksonville (VP-8) and also request additional Virginias to run the "perimeter" in hope to run into those pesky Yasens or Oscar-IIMs to prevent them from launching. Well, the big game starts.

The US Navy is a proud and, despite its problems, still very powerful force. And although a number of credible ASW scholars warned for decades that ASW of the US Navy is a "soft spot", even the ensign fresh from USNA knows that you need to guard US Navy's most important installations and bases. Like Norfolk. So, what do those people do? They take the compass and start choosing the places with the highest Probability Density for the hostile sub's position. I omit for now this rather not difficult issue because at this stage of the warfare we are talking about not tens or even hundreds of kilometers of ranges, no, we are talking about thousands.  This is unprecedented in history. Mind you, Russia has already Zircon with the range of 1,500 kilometers and speeds in excess of Mach=12-13 in works. So. You get this (simplified)--you draw the baseline and then draw (with Norfolk in center) a semi-circle which matters a great deal, especially its shaded ocean part, which stretches (has radius) 1,000 kilometers into the Atlantic. 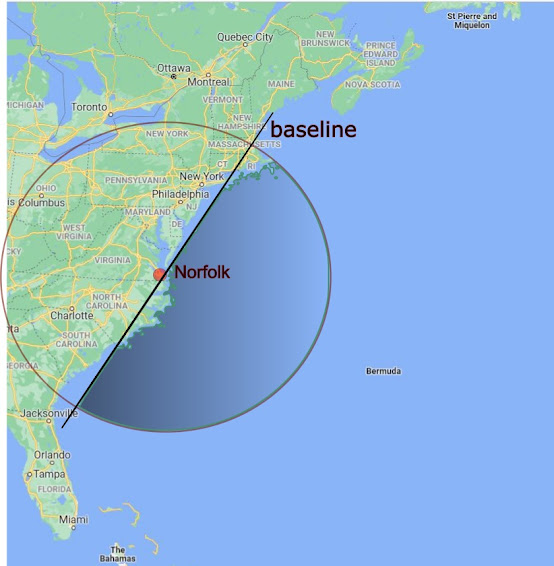 This is where your aggressive, democracy-hating, Russian Yasen or Oscar-II M SSGNs will be, probably. Yes, a good term to use in this particular case--probably. How much is this "probably"--later. Now everything gets easy, not. The area of this probable Russkies' "station" is just one half of this circle: A=0.5 x 3.14 x 1000^2= some measly 1.57 million square kilometers. Easy-Peasy (I kid, I kid). Now, once ASW/Patrol aviation enters the picture--mind you, we are still not shooting at each other--we can start calculations in earnest.

2. For a single P-8 Poseidon to sweep these "measly" 1.57 million square kilometers area thus requires: 1.57 million sq.km : 800 = only 1,962 hours or about 82 days. I told you--easy, right? Of course, common sense tells us that more than one Poseidon will get involved, but as you already saw previously, unless we are talking about a Flaming Datum (that is either actual detection or sub giving its position up) we are facing Probability of Detection of such sub for a theoretical single P-8 Poseidon as:

In this simple formula our C is just the ratio of our effective search rate or sweep rate (800 sq.kilometers per hour) to the Area to be searched. Which in itself is not a probability of detecting a sub in the area but only a probability of our sensor (MAD) to detect it if it is there.

Second sweep over the same area then gives us:

The problem, of course, is that once the Area of search increases two fold, to 1,600 sq. km (C=0.5), our POD drops in a single sweep to 0.39. And once we get Poseidon on station sweeping the Area of 4,000 sq.km (C=800/4000=0.2) we will get only POD of 0.18 after 5 hours of sweeping. So, imagine now that in our case we are talking about the area which is THREE orders of magnitude larger. Of course, naturally, it will be assumed that those Russian subs will be abusing the relative safety of farthest edges of this circle. Possible? Possible, but then again--they may simply sneak in and out, or just close in for a launch at 500 kilometer range. What one has to remember, that even from the range of 950 kilometers it takes a salvo of Zircons flying at M=8 to reach the target only 5.5 minutes. And this simple fact throws all modern ASW tactics into a full blown chaos, because any carrier of 3M22 can afford to make a gift of a flaming datum to an enemy, without much risk for itself. Why it is so--later.

Update: thanks to readers--US used P-8 Poseidon, unlike those of India's Navy, doesn't have built-in MAD and "theoretically" is supposed to operate MAD carrying drone. Well, good luck with that. In the same time, good ol' P-3 Orion still has some life left. You can recalculate for P-3 with its sweep speed, at 60 meters altitude, of 360 kilometers per hour.