Russia is ready to increase energy supply to Europe:

President Vladimir Putin said Wednesday that Russia was ready to boost natural gas supplies abroad, after Europe accused Moscow of curbing flows and pushing prices to new records. Speaking at an energy forum in Moscow, Putin said Russia was ready to meet new orders from buyers for higher volumes. "If they ask us to increase more, we are ready to do so," Putin said, adding that Russia is increasing supplies "as much as our partners are asking us." Europe is facing a gas crisis leading up to the coldest season of the year, with a surge in prices and depleting reserves caused by a cold end to last winter.

But, of course, even in this bit of news, the last phrase is, as is traditional, a lie. The Agence France Presse (which reports it) merely adds:

But Putin on Wednesday blamed "systemic flaws" in the European energy market and brushed off criticism, saying that "some try to pass their errors onto others".

And why don't journos and staff BSer, ah, pardon my French, writers expand on what Putin said and what REAL energy professionals warned for years--"green energy" is a utopia turned totalitarian religion in perverted (literally and figuratively) minds of West's humanities dumbed down "elites", who have zero background in engineering and natural sciences, and it was inability of "green" sources to supply modern civilization with steady energy this civilization needs to survive, forget about living decently. Here is Putin verbatim:

Translation: I repeat: the rise in gas prices in Europe was the result of a shortage of electricity, and not vice versa. And there is no need, as they say, to shift from a sore head to a healthy one, as we say, as some of our partners try to do. Sometimes you listen to what is being said about this, and you are surprised, it’s just amazing, as if they don’t see the numbers - I’ll say more about this - they don’t see the reality, they just cover up their own mistakes. Over the past decade, step by step, systemic flaws have been laid in European energy. It was they who led to a large-scale market crisis in Europe. Let me remind you that as long as the leading positions were atomic and gas generation, there were no such crises, there was nowhere for them to come from. I will add that today, thank God, such problems in Russia are unimaginable. A long-term approach to the development of the fuel and energy complex allows us to provide electricity prices for the population and enterprises at the lowest level in Europe. For comparison: the average price of electricity in Russia in terms of euros is about 20 euros per megawatt-hour, in Lithuania - 256, in Germany and France - 300, in the UK - 320.
Never mind, of course, that Russia will be hated (traditionally) for exposing, yet again, incompetence of West's elites, because these people are incapable of critical thinking and are butt-hurt, severely.  But then again, this is one of those "we told you so" moments. Read my lips: Western elites are IN-COM-PE-TENT. I am not alone, I will remind you about this:

Let's face the facts--reading, by even moderately educated and cultured human, mental excrement by Fukuyama, Schwab, sophomoric sloganeering by Bill Gates, or generalizations by Mearsheimer, or pseudo-economic "strategy" demagoguery by Luttwak, among many others, can only inspire laughter, the kind one has when seeing a kindergarten child pontificating on the matters of quantum mechanics. It is risible, that these people pretend to be running what amounts to the ship of fools. Enter Vicki Nuland--another fine product, together with her hubby Robert Kagan, pretending to know the world outside.
Nuland is in Moscow currently, after the whole ordeal of getting permission to enter Russia--as a private person she is listed as "undesirable" for Russia--and to allow its "diplomat" to get the permission from Russia, Washington was forced to remove some Russians from its own "black list". So, she was allowed, met with Deputy Foreign Minister Ryabkov who openly stated that at this stage positions of the sides to negotiations do not fit well (in Russian).  No surprise, they do not. They WILL NOT for a long time. But Nuland, who passes in D.C. for "expert in former USSR" is in Moscow trying to squeeze from Russians whatever the US can in terms of Ukraine, which increasingly becomes a burden for the US, and discuss issues of mutual relations which de facto have been almost finished off during Trump Administration. Usually Russians are permissive to US envoys and allow them to meet "above" their pay grade. This time, however, Nuland has been denied meeting with Lavrov. Putin expressed a conviction that eventually Russian-American relations will stabilize, and one can only hope so. We'll see. Hopefully they will in the long run. But then again, looking at D.C. cadres, including US Congress which is hell bent on wrecking the relations with Russia completely, this may take a very-very long time.
But geopolitical and economic events run their course. Yesterday some flake from California lamented Russia's position by writing this shit:

Increasing reliance on Moscow is not only a geopolitical danger -- the increase of demand for fossil fuels also poses a serious threat to climate goals. Europe hasn’t just turned to Moscow for natural gas, it has also looked into stockpiling coal for the winter. China and India, too, are facing their own energy crunches. China has even experienced rolling blackouts in recent weeks as Beijing struggles to keep up with demand. This has led to skyrocketing coal demand in a time that the world needs to stop burning coal altogether. Ultimately, these energy crunches around the world showcase just how much we are still reliant on fossil fuels to shore up our energy security, and the outsized power that this gives to major energy players such as Russia, creating a dangerous and delicate geopolitical (im)balance.

Here is her: Haley Zaremba is a writer and journalist based in Mexico City. She has extensive experience writing and editing environmental features, travel pieces, local news in the Bay Area, and music/culture reviews.
You see, she has zero experience in anything except writing on something she has no experience in. Indeed, it is well known fact that energy is so simple, almost like writing about environment and travel. Anyone can become energy "analyst", without attending Masters Degree program in engineering with the focus on power-generation, or Geology faculties with specialization in surveying and resources development. Just like that, I wonder if tomorrow I can start writing about... about...ah, yes, quantum mechanics or cosmology. And why not? Here is another mentally inadequate cretin, who gets excited about Estonia buying some subsonic anti-shipping missiles which will, in his fantasy:

Cutting off sea trade to Kaliningrad slowly could starve the 400,000-person exclave and mitigate the threat it poses to NATO’s eastern flank. NATO as a whole—and non-aligned Finland, as well—certainly possesses the striking power to threaten supply convoys sailing from St. Petersburg to Kaliningrad. 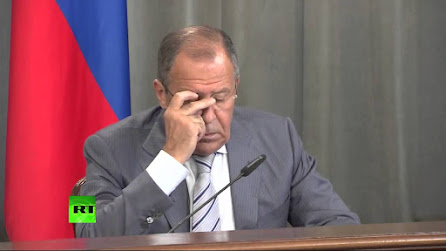 These people ARE NOT exceptions, in their delusions, incompetence, down right cretinism they are representative of the West's "elites" thinking and that is why we observe today a geopolitical FUBAR on unimaginable scale. All of it is systemic and comprehensive. In related news, check out a wide-spread incest and pedophilia of French elites. The latest one (in Russian) and before (also in Russian). The West is sick and the sickness is untreatable, it metastasized into everything from economy, to culture, to morality to even science. Europe is certainly done. The United States? Will the silent majority raise its voice? There are still several seconds to midnight.
Posted by smoothiex12 at 12:48 PM