A Tiny Piece Of News.

Behind all the chaos of modern world and a wall of BS by the so called "legacy" media, one piece of news is of a particular interest. While MAKS-2019 proceeds as planned, with MC-21 making a flying (public) debut, news of CR-929 getting to fly in 2023 are a huge deal. As Izvestiya reports two days ago (in Russian), Chief Designer of CR-929 program Maxim Litvinov (I wonder if he is related to Stalin's 1930s Peoples' Commissar of Foreign Affairs) stated that the first flight of CR-929 will happen in 2023 while serial production will start in 2025. This is fast, folks, for a project of such a scale, it is really fast. Russia, in this joint venture, is responsible for a design of the wing and center section of aircraft (in Russian) and, drum roll, for PD-35 engine, which will power this machine.

As you know, PD-14 already received the certificate of a type and is in serial production for MC-21. Here is what was stated about PD-35 in 2017:

Russia’s new bypass turbofan engine, dubbed PD-35, will be developed in the next six years, Alexander Inozemtsev, chief designer of Aviadvigatel (a subsidiary of the United Engine Corporation), has told TASS news wire. The engine is intended to power future wide body aircraft, including the Russo-Chinese C929. Inozemtsev said the powerplant program is currently in the scientific research phase. Total investment in the project will amount to almost 180 billion rubles (approximately $3 billion). Of this sum, 60 billion rubles will be spent on test benches and laboratory equipment. The PD-35 is a turbofan engine projected to develop 35 tons of thrust. The program was launched in the summer of 2016 as a joint effort by Russia’s largest powerplant specialists, Perm-based Aviadvigatel and NPO Saturn, which is located in Rybinsk (both are part of the United Engine Corporation). The plan is to scale up the core of the PD-14 engine, which is currently being developed for the Irkut MC-21 narrow body airliner, and add a stage to its high-pressure compressor. There will be nine stages in the compressor and two stages in the turbine.

So, these latest news about CR-929 taking to the skies in 2023, then, could be viewed as a confirmation that PD-35 development is on schedule (give and take a year). This is also a confirmation of Russian civil aviation not just taking off--we knew that it was taking off years ago--but getting to the cruise echelon. As Yvonne Lorenzo reports (in her wonderful review of my new book):

Russian-based MAKS 2019 aviation exposition, Boeing was an exhibitor, and the news was reported on the site included, “Boeing Company will announce new strategic initiatives and sign agreements with Russian partners at the International Aviation and Space Salon, according to the press service of the American aerospace manufacturer. Boeing will sign a number of agreements with Russian companies at MAKS-2019. ‘Agreements will be signed with Russian partners and will strengthen long-term obligations within the framework of the company’s partnership with the Russian aerospace industry,’ the statement says.” Thus, sanctions notwithstanding, Russian companies continue to buy—or at least have an interest—in Boeing products and “god-emperor” Trump, “grand and glorious” though he may think himself has—as of now—not prohibited any such sales to Russia by a vital member of the Military-Industrial complex.

What do ya know. Of course, one should remember that a lot of things, including a wing for B-787, were designed at Boeing's engineering facility in Moscow. So, while the United States sanctions Russia non-stop and insists, especially, on Europe doing the same (those morons evidently took it too far for their own comfort now), somehow Boeing continues to operate in Russia and even, well look at that, hosts Russian school kids, the winners of the contest Aviation From A to Z in 2018 (in Russian). Indeed, and why would Boeing do such a thing (wink, wink). 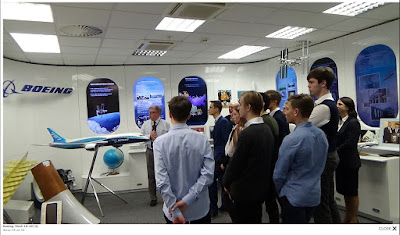 But all this brings us back to a purely geopolitical question. Whose side is Russia on?  The answer is very simple: Russia is on Russia's side, period. Moreover, pushing on with the development of the MC-21 and CR-929 and the line of their power-plants such as PD-14 and PD-35 Russia not only returns to own domestic civil aviation market with a vengeance, she made sure she will have a huge share of a Chinese one. While public at MAKS 2019, traditionally, was treated to a dizzying display by Russian combat aviation, it was this bird which stole the show for people who look at the world not just through the aiming device.

In related news, Europe (the United States is not far behind, but there is still a hope, maybe) continues her descend into madness and totalitarianism with Thought Crimes exposed now by Thought Police non-stop.

PHP Central Europe would have gathered hundreds of users of PHP, a popular programing language, together in Dresden in October, if not for one seemingly innocuous tweet that sowed the seed of destruction coated in a shell of positive verbiage. “This year's PHP CE conference seems to have gone with the ‘White Males Only’ conference lineup. Shame. It's 2019, we can do better,” wrote Karl L Hughes, an obscure tech industry figure and “concerned citizen”, who had no plans to travel to Germany himself. The tweet went viral....  after the brouhaha, “ticket sales stopped.” This week, organizers published a notice saying that the event in Dresden was canceled, citing the tweets and articles as the reason. They say that there will be no PHP CE conference next year or ever again.

I am not sure in 20 years Europe will be able to produce a decent kitchen combine, let alone aircraft, because it will be too busy developing mechanisms of upholding gender, race and religious quotas, lest there be a dominance of smart white males in manufacturing of the technologies for the XXI century.
Posted by smoothiex12 at 8:00 AM