Colonel Lang Had It With Trump, And Other Business.

Colonel Lang tried to stay calm but even he had it with collection of maroons aka Trump Administration.

Trumpy!  These stiffs are losers!  Losers!  They lost in Iraq!  Remember!  You say you like to win.  These guys are losers.  Keeping these losers will just drag you down!  You always dump losers like these.  Remember!  Where did you get these stiffs?  Who pushed them off on you?  Get rid of them losers too! Bolton torpedoed your deal with your friend Kim!  Remember.  Is he trying to torpedo your deal with China? You know that you  have to make some kind of deal with Russia and the great judomaster.  Is Bolton trying to screw that up ? The three stooges.  Ah, no, Pompey the Magnificent is missing from the group mug shot.   Trumpster! You should dump these guys, AND the crews who gave us the messes in Ukraine, Syria, Gaza, the Golan Heights, Kushner's deal of the century, and the coming good deal in Lebanon.Get some new ones.  You can't let little people losers drag you down.

I long ago simply resigned myself to the fact that nothing short of all out war (I mean within US proper) can change the situation with US elites consistently producing human and professional trash which then occupies top positions in American political structure. The level of degeneracy is simply off the scale and continues to break records. Look at the faces, BTW. 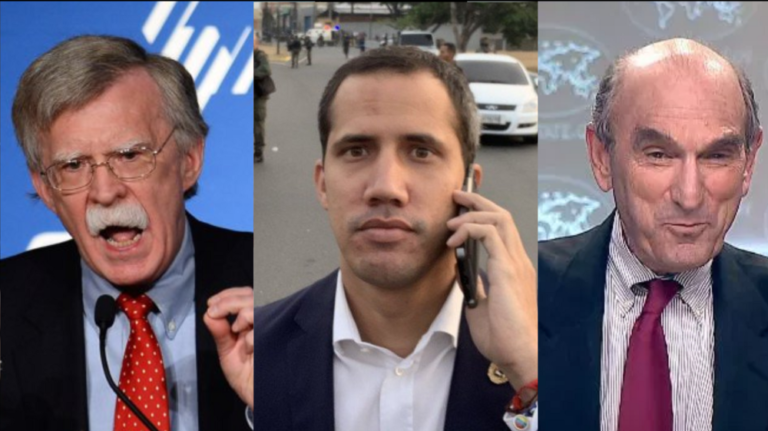 Per Bolton, he is a very special case of uber-neocon and exceptionalist who, probably, given his not very large frame, was beaten in school without trying to fight back and now he is settling accounts with his pathetic cowardly self by trying to bully those, he thinks, can not hit back. There is a definite mental pathology there. I will omit discussing here other possibilities. As The Hill reports:

Michael McCarthy, a professor at George Washington University’s Elliott School of International Affairs, likened the recent posturing by administration officials to being "in a position where they believe it’s time to get a win for Trump." "They’re doubling down, but they’re working on what doubling down means besides increasing sanctions pressure," McCarthy said. "We’re in a gray zone between the saber rattling and action, and I think we’re going to stay there for the foreseeable future." But inaction is unlikely to satisfy Bolton, Posner said, even if it sets up a showdown with Trump. Bolton will likely "find another reason for military intervention," he said. "If that happens, I think that Trump will back off because he knows that’s a losing proposition."

Patients truly are in charge of the asylum. So, will Trumpy kick these dangerous morons out or is he really content with lunatics running his national security and foreign policy, or, rather, lack thereof. How about dropping Bolton with Elliott Abrams with the SEAL team into Venezuelan jungles or at the Iranian shores--let them lead by example.

Now white people in America are to be stripped of their history, because white history traumatizes preferred minorities. At George Washington High School in northern California an historic mural depicting the school’s namesake has been declared offensive.

PCR explains eloquently what will come, I can too. It is worth reading and contemplating.

Scores of nations across the Global South, as well as some aspiring to developed world status, have adopted the Chinese investment and development model over financing from Washington or Brussels for three very simple reasons: no strings attached, no one-size-fits-all straitjacket, and no interference in their internal affairs.

Ahh, here are some other news on this issue: