What Did I Say?

Remember me pointing out not for once that West's so called "elites'" feelings towards Russians is, and I quote (myself):

West's hatred towards Russia is not just ideological and cultural--it is racial.

Now the truth begins to slowly emerge. Former US "intelligence" big honcho James Clapper in his interview to NBC says it all:

"If you put that in context with everything else we knew the Russians were doing to interfere with the election, and just the historical practices of the Russians, who typically, almost genetically driven to co-opt, penetrate, gain favor, whatever, which is a typical Russian technique. So we were concerned."

Ah, those Russian untermensch, how could they point out, out of their own "historical practices", among which were such things as liberation of Auschwitz, the fact that among typical Clapper's and his ilk "techniques" are killing with impunity of millions of innocent civilians, destroying nations, co-opting, penetrating, gaining....wait, these are Russian genetic traits. So, there you are, we finally arrived to what I warned about. I know there were some German POW camps in and around Phoenix, AZ in the immediate aftermath of WW II. I think, Mr.Clapper should look very attentively into the possibility of turning those into the concentration camps for untermensch, I mean Russians, whose genetic composition is a clear and present danger to the American "democracy".  So, there you are, boys and girls--the "best" what US "intelligence" could produce, and this are also views of very many in US "elites".  In the end, preserving of precious bodily fluids is so important. 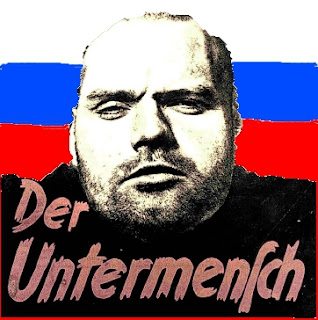