A Photo, A Contrast.

Do you know what photo is that? 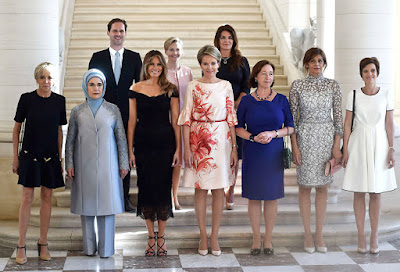 This is the photo of wives of the leaders of the NATO members on their gathering in Brussels. Yes, wives, all right? The dude in the second row right behind the right shoulder of always stunning Melania is also a... wife. He is a wife of Luxembourg PM Xavier Bettel and his (her, its?) name is Gauthier Destenay. This is so progressive and so... fabulous.

I was reading today about T-4 Truman Kimbro, the recipient of Congressional Medal Of Honor, who died heroically at the Northern Face of the Bulge, saving his squad, while mining, being severely wounded, the cross-roads near Rocherath during the Battle of The Bulge. 25 year old kid sacrificed his life delaying the breakthrough of German armor into the rear of his 2nd Infantry Division and saving his combat buddies. I am preparing the post on Ardennes ordeal. The contrast between this photo and what Truman Kimbro did (Russians know an outstanding heroism when they see one) and what Western Europe, which Allies liberated, has become can not be starker. What would this real American hero say, should he be alive today, about the country near which he inscribed his name into the pantheon of military heroes? This is not a "What would Jesus do" type of question, this is a real moral metric relative to which one has to judge oneself. One could see this moral bar raised again in Russia with her immense Immortal Regiment marches. But as I said before, and I will repeat it again:

They didn't fight at Kursk and Omaha Beach for this.