It Is Only Natural.

Let's throw away emotions and feelings and recall what I stated in my video and in discussion several days ago:

Repeating Russian (Soviet)-India model of lease of nukes, about which I speak in my video. US Navy will have Block I Virginias reaching their 20-years service life equator by 2025 and do not forget that there are still plenty of Los Angeles-class which reached their 30 years service life. Plenty of goodies to go around.

Thanks to Bernhard of Moon of Alabama who does, as usual, an excellent job of monitoring media and analyzing facts, I personally became aware of this by the way of MoA from The Guardian:

The short-term leasing of nuclear-powered submarines from the UK or the US is being considered by the Morrison government but the Coalition insists nuclear weapons won’t be based in Australia.

Let's take a look on what is at stake here.

1. This is an intensity of a marine traffic in the region around China. 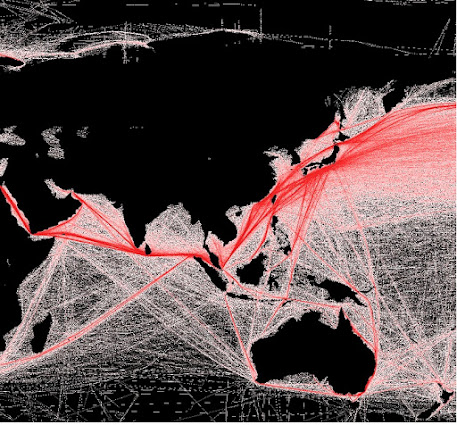 As you can see, any kind of nukes (SSNs) based in Australia have an excellent and fast access to SLOCs both in Indian Ocean and into the deep areas of South China Sea. Operations on SLOCs are as old as navies themselves. China, obviously, depends on SLOCs and even 2-3 additional (Australian) SSNs with Harpoons and torpedoes on permanent patrol in the areas of interest can wreck a havoc on the flow of resources for China. They will also attract serious Chinese resources in terms of ASW. I am not going to discuss now purely tactical and operational issues, but in the minds of US planners this all makes sense.

2. Now, to the mechanics of all that. This is Chakra of Indian Navy.

USSR/Russia and India have been at this "lease" thing since 1980s, with the first SSGN of project 670 officially joining the Indian Navy in 1988. So, nothing new, really, in leasing out state-of-the-art nukes to someone. If Russia and India can do that, US and Australia, who ARE brethren nations, certainly can. So, not really surprising in learning that the US will lease subs to Australia. In fact, emotions aside, it is the only natural way to increase the submarine force against China in such a way that it strains Chinese and PLAN's resources and, in case of war, helps to shut down SLOC's which are still crucial for China. Pure navalism, folks.

3. Let's take a look at what is available in a short term. Granted, the Australian crews are getting ready or are already in training for running US nukes. I can tell you immediately--do not forget good ol' Los Angeles-class SSNs. Many of them are either in conservation, reserve or are about to be moved there. There are currently, if to believe WiKi 28 active Los Angeles class SSNs and 1 expecting decommissioning. SSNs 768 through 773 are reaching their 30 year old age but are still active and who knows what their fate will be with at least 8 Virginia-class SSNs being either under construction or announced. Those Los Angeles subs will need to go somewhere and this time it might not be to the scrap yard. Couple of early Los Angeles class subs SSN 719 and 723 are also planned for recycle in 2022.

So, there are options. It doesn't make France's life easier, for sure, but purely on the military merit, from the shores of Potomac it makes perfect sense. I have to admit, all things considered, it does make at least some sense. Of course, such an approach does not guarantee a success for a number of reasons, but keep in mind that anything based in Perth, as an example, becomes impervious to Chinese medium-range ballistic missiles because neither DF-21 nor DF-17 fly at 5,800 kilometers even when launched from China's south-most point. So, this is another key to this decision. The main issue, however, is this--does the United States think that it can control possible conventional conflict with China that it does not accelerate to a nuclear threshold? That is a huge question to ponder. And yes, China's nuclear subs are not as good as American ones, it is a hard cold fact. What will China do? Ask this question: what will Russia do?  Believe me, it is no less important, if not more. Recall few years back my reaction:

And here is the news, PLAN, for now, doesn't have submarine force which is even remotely competitive both in numbers and quality with the US Navy's submarine force. All bravado on both sides apart, US submarines in the Pacific are overwhelmingly superior to PLAN's nuclear subs (SSKs are a separate issue). Currently the US Navy operates 32 Los Angeles-class + 3 Sea Wolf-class + 15 Virginia-class SSNs = 50 SSNs ALL of whom, including older L.A. class SSNs are superior to anything PLAN can deploy in terms of nukes, which is roughly 9 nuclear subs, only 6 of which could be considered relatively modern (Type 093). Period. Yes, PLAN does deploy a substantial number of conventional SSKs, but again, this fleet of subs is good only for a relatively short distance deployments in defense of own littoral. We are talking here about overwhelming advantage US Navy enjoys over any PLAN's surface or nuclear power submarine force beyond the First Island Chain. I am not even talking here about remote segments of SLOCs. Yes, Chinese are improving, yes, they are gaining both capability (such as destroying US aircraft carriers) and some operational experience, but it takes much more than that to command the seas. I will also avoid describing some info (very reliable one), I just mention it, that testifies against Chinese tactical and operational maturity, for now--I underscore that, for now. But namely for now PLAN, for all US Navy's huge institutional problems, is not a real competitor in one domain, which today defines command of the seas--underwater. US submarine force is simply better, much better and that's the reality, which Admiral Lou should have considered and James Holmes remembered when trying to respond to Chinese naval officer.

And don't tell me that I didn't warn you;)) I sure did, wink, wink. It was only natural for the United States to start leveraging its one of a few remaining and significant advantages in combat technology, submarines, and I am sure people in Beijing and Moscow expected it. I am sure Moscow did.
Posted by smoothiex12 at 6:24 PM