Boy, it is a shitstorm in media since one of PLAN's Admirals, Admiral Lou, started chest-thumping a week or so ago:

His speech, delivered on December 20 to the 2018 Military Industry List summit, declared that China’s new and highly capable anti-ship ballistic and cruise missiles were more than capable of hitting US carriers, despite them being at the centre of a ‘bubble’ of defensive escorts. “What the United States fears the most is taking casualties,” Admiral Lou declared. He said the loss of one super carrier would cost the US the lives of 5000 service men and women. Sinking two would double that toll. “We’ll see how frightened America is.”

I agree, this statement, which may or may not be true, comes across as rather rude and in many respects as a simple bravado. There are number of reasons, including purely ethical ones, that these kinds of statements should be made in a professional manner and not without accounting for the history of the issue. But Lou's statement didn't go unanswered and James Holmes today, in The National Interest (where else) returned the trash talk in a very emotional piece. Holmes exclaims:

Keep talking, admiral. Fighting words make it easier politically for us ‘Mercans to don our game face. Threats help us rally. The United States took a strategic holiday it never should have taken after the Cold War, letting its readiness for major combat slip. The armed forces are now scrambling to make up for lost time. But that’s a separate problem from political moxie. No one from any U.S. political party countenances an assault on American fighting men and women—let alone one that claims more lives in an afternoon than the combined figure from seventeen years of the Global War on Terror.

But, while I totally get where Holmes is coming from, one is inevitably forced to remind him that the United States didn't encounter peer or even near peer military power in ages, namely since 1945. But realities of modern warfare, both naval and in other environments are such, that massive military casualties are not only possible--they are most likely. I don't know if former naval officer Dr. Holmes recalls it but other, US Army officer, Colonel Douglas Macgregor had no inhibitions in looking reality into the face in 2011:

“In 110 days of fighting the German army in France during 1918, the U.S. Army Expeditionary Force sustained 318,000 casualties, including 110,000 killed in action. That’s the kind of lethality waiting for U.S. forces in a future war with real armies, air forces, air defenses and naval power. Ignoring this reality is the road to future defeats and American decline. It’s time to look beyond the stirring images of infantrymen storming machine-gun nests created by Hollywood and to see war for what it is and will be in the future: the ruthless extermination of the enemy with accurate, devastating firepower from the sea, from the air, from space and from mobile, armored firepower on land.”

And Macgregor is absolutely correct in stating the case in, granted very approximate, numbers of casualties. I don't think Macgregor is well versed in Soviet/Russian military but he is correct in giving order of magnitude of losses when meeting a near peer or peer.

Holmes, after some general political talk and rebuttal of Lou, goes on emotional defense, and you already guessed it, of US Navy's Aircraft Carriers. Some points Holmes makes are valid:

Whether the PLA could sink two carriers thus depends on its ability to detect, track, and engage vessels operating from opposite sides of the Pacific, and it depends on how U.S. carrier-group commanders handle fleet operations at sea. It remains to be seen (except perhaps in the spooky realm of classified intelligence) whether China’s array of satellites, sensors and other surveillance assets can find and track moving task forces in the vast emptiness that is the Pacific Ocean with any real precision.

True, nobody realistically knows how good Chinese reconnaissance and targeting systems are and if they are survivable in case of a conflict at all. In the end, how accurate realistically is Chinese DF-21, said to be the first ballistic anti-shipping missile in the world, nobody knows. And here is the deal, Chinese do tend to overstate own capability and the first proof of that is steady, continuous purchase of Russian military technology, including a rather substantial number of Russian-made anti-shipping missiles. So, how credible is Chinese anti-carrier threat? It is certainly not just a bluster, China does have at least some capability to inflict the damage or achieve at least mission kill--in case of the fairly short (granted it stays conventional) conflict in theater that is as good as sinking. One also cannot discount gigantic energies hyper-sonic missiles, even in the inert, that is without explosives, release upon the hit on a target. After all Rods from God was RAND's idea--it is as American as baseball (sorry, Canada) and apple pie (sorry, Germany), as is even more terrifying weapon such as a Gay Bomb or even a Fart Bomb--what an evil twisted mind would come up with such a weapon of mass fartification and well, the other one, you get the idea.

I don't think Holmes' bringing up USS America's SINKEX applies here because if any CVN's ammo storage detonates or its nuclear reactor is damaged we may indeed talk about a complete kill of the ship with horrendous casualties to boot--a scenario which must be avoided. But Holmes still tries to make operational and tactical case for CBGs.

Task forces can also operate in congested waters, mingling with other traffic to clutter an enemy’s tactical picture. They can operate near shore, using coastal terrain to mask their whereabouts. They can make foul weather their friend. And so on. Creative options exist for forestalling an America scenario and have for many years. U.S. naval commanders should harness familiar standards from World War II and the Cold War while devising new methods of operational concealment, guile and deception.

I disagree with the argument of congested waters and traffic--this is precisely the environment which will provide good intelligence and targeting precisely for reasons Holmes invokes in his argumentation--other people also learn their lessons and any fishing vessel with basic radar and Beidou, GPS or GLONASS receiver can provide very good real time coordinates of CVN. James Holmes teaches in US Naval War College--he MUST know that salvos of ANY anti-shipping missiles are done, depending on type, as the tangents of a circle with the radius of, roughly, Vcarrier*tfrom detection, or with account of the obsolescence of the targeting data when the datum is a single identification. It is precisely in the cluttered waters where CBG and its heart--CVN are identified easiest and intelligence is provided. Here is the scheme of the salvo by anti-shipping missiles by three SSGNs with the coverage of the area of probable CBG location. 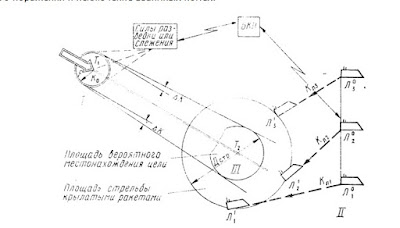 A big arrow is a general course of CBG when intelligence is verified. That large circle is an area of the launch of ASMs by SSGNs, small one--is CBG's location probable at the launch time. And that brings us to a funny situation, with my piece at Colonel Lang's site few days ago stating, and I quote myself:

While diesel-electric or non-nuclear submarines of PLAN can play crucial role in defense of China's littoral, operations in the open ocean require nuclear-powered submarines. China has problems with this particular type. While PLAN's program of building surface combatants is extremely impressive, nuclear submarines remain its Achilles heel. As one Russian naval analyst observed in July 2018, citing also US Office of Naval Intelligence Report, modern Chinese nuclear powered submarines lag seriously even behind American and Russian third generation nuclear submarines, such as project 671 RTM (NATO Victor III-class)  in terms of quieting—a key, albeit not the only one, tactical and technical characteristic of a submarine.[4] Nobody can predict when and if China will be able to match its nuclear submarines' capability, and a surface force required for support of their operations, with that of the US Navy's but it is obvious that this issue must be high on a priority list of Chinese strategists. Lesson from Admiral Gorshkov can help. The lesson is simple—there is no modern powerful and balanced navy without powerful nuclear submarine component armed with modern weapon systems.

And here is the news, PLAN, for now, doesn't have submarine force which is even remotely competitive both in numbers and quality with the US Navy's submarine force. All bravado on both sides apart, US submarines in the Pacific are overwhelmingly superior to PLAN's nuclear subs (SSKs are a separate issue). Currently the US Navy operates 32 Los Angeles-class + 3 Sea Wolf-class + 15 Virginia-class SSNs = 50 SSNs ALL of whom, including older L.A. class SSNs are superior to anything PLAN can deploy in terms of nukes, which is roughly 9 nuclear subs, only 6 of which could be considered relatively modern (Type 093). Period. Yes, PLAN does deploy a substantial number of conventional SSKs, but again, this fleet of subs is good only for a relatively short distance deployments in defense of own littoral.

We are talking here about overwhelming advantage US Navy enjoys over any PLAN's surface or nuclear power submarine force beyond the First Island Chain. I am not even talking here about remote segments of SLOCs. Yes, Chinese are improving, yes, they are gaining both capability (such as destroying US aircraft carriers) and some operational experience, but it takes much more than that to command the seas. I will also avoid describing some info (very reliable one), I just mention it, that testifies against Chinese tactical and operational maturity, for now--I underscore that, for now. But namely for now PLAN, for all US Navy's huge institutional problems, is not a real competitor in one domain, which today defines command of the seas--underwater. US submarine force is simply better, much better and that's the reality, which Admiral Lou should have considered and James Holmes remembered when trying to respond to Chinese naval officer. As per carriers--you all know my attitude to these ships as being in the process of removal into the niche of pure power projection against weak powers, and at this stage one has to ask the question I raised several days ago while talking to Arctic Fox:

CAN AVANGARD BE USED AS ASM?

Something tells me that not only it can but it will be. Once this happens, we might as well forget about surface fleet as we know it today. That will be the entertainment.
Posted by smoothiex12 at 11:39 AM