James Kunstler yesterday summarized, artfully as ever , the essence of the American economy nowadays:

Real capital is grounded in the production of real things of real value, of course, and when it’s detached from all that, it’s no longer real capital. Money represents capital, and when the capital isn’t real, the money represents…nothing! And ceases to be real money. Just now, America is producing almost nothing except money, money in quantities that stupefy the imagination — trillions here, there, and everywhere. The trouble is that money is vanishing as fast as it’s being created. That’s because it’s based on promises to be paid back into existence that will never be kept, on top of prior promises to pay back money that were broken or are in the process of breaking. The net result is that money is actually disappearing faster than it can be created, even in vast quantities.

Many of us (yes, me included) wrote about it for years and years, yet, through the new crop of "market analysts", the idea that money is the only thing that matter was being carved into the minds of majority, while covering up for the real state of what I call them--tangibles. Let me demonstrate. This is US industrial (that means tangibles) output within last 12 months: 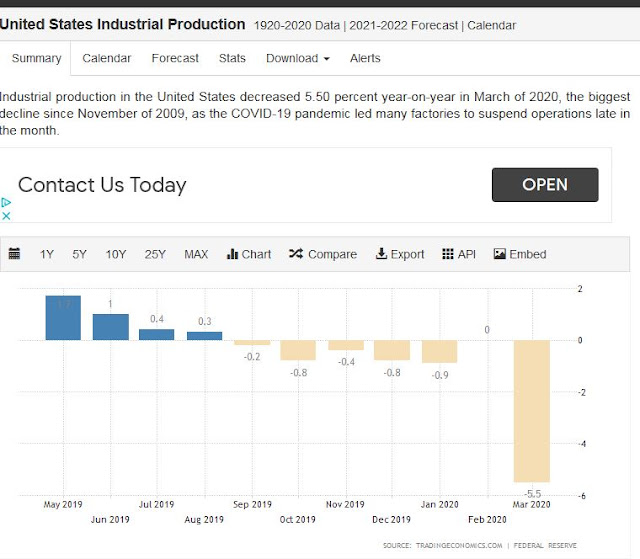 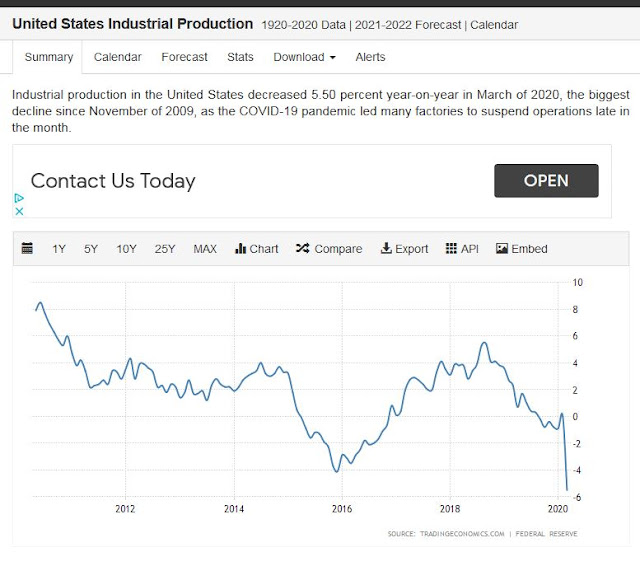 These graphs based on US official data should be kept constantly visible for people who continue to press the idea that Covid-19 is the reason for this all. Obviously, it is not. As I repeat ad nauseam since the start of this pandemic--virus is merely a trigger, one of. The shit was going down the drain for a long time and, as the recent increase in anti-Chinese rhetoric based on a totally false (what's new, really?) accusations on Covid-19 origins demonstrates, things are not that good for the United States.

Obviously, US "elite" knows how to manipulate the currency and conduct currency wars--it is expected from them. Most of them never saw modern industrial plant and never ran any kind of productive business which would have been based on those tangibles--main capital, as in buildings, machinery, cadres (yes, people), manufacturing plans and training, trucks, ships, what have you. From the get go those people were "educated" in banks' operations, debit, credit, fees, "valuations", stocks, margin calls and other mambo-jumbo in the foundation of fake American GDP. As new update of old Soviet/Russian anecdote about cowboys goes today:

Two cowboys, Bill and John, ride their horses in prairie. While riding there, Bill sees a pile of horse shit and because he has 100 dollars it occurs to him--why wouldn't I dare John to eat this pile of horse shit for a hundred dollars. So, he dares John to do just that. John thinks: hm, of course, eating horse shit is really humiliating and disgusting but 100 bucks, damn, too serious of a money to pass on such an opportunity. So, he agrees and eats this pile of shit and Bill gives him his 100 bucks. They continue to ride side-by-side after that. While riding both think.
Bill: well, it is all cool that John ate a pile of horse shit but, man, 100 bucks is too great sum of a money to pay even for such an atrocious challenge. I wish I never dared Bill and kept my 100.


John: well, it is really cool to have 100 bucks, but, man, I ate a pile of horse shit for that and now Bill will taunt and humiliate me for this. I wish I never agreed to accept his challenge.

While thinking like that they pass another pile of horse shit and John dares Bill to eat this pile of shit for 100 bucks. Bill agrees and does just that, John gives him 100 bucks. After that both cowboys continue to ride side-by-side in full silence. After few minutes of riding in silence John breaks it: "Hey, Bill, you know what? Don't you think that we both just ate a load of horse shit for free?"
Bill replies: "But we just created $200 worth of GDP and created two new jobs."

So, while the United States is getting ready to squeeze China for whatever it can--I think T-bills "targeted" default and putting "pressure" on Chinese owning businesses in the US is a natural choice (I could be mistaken, of course), evidently some rags in the US are beginning to experience a hangover from giving up tangibles: now they are lamenting the "mistake" of outsourcing. No shit, morons. And the problem here is not just classic issue of export of capital well described more than 100 years ago by many classic Marxists. Not just that, in Marxism basis (foundation) of the productive forces (and productive capital) defines the superstructure of morality and culture. This applies fully for a number of the Americans' generations we can identify by the letter or title: X, Z, Millenials, what have you most of which were brought up by the imagery of the office universe in which real life was and is happening non-stop. In fact, once you take a broader look on who is dramatically over-represented in modern art, two categories stand out--financiers and artsy types. One after another, stock brokers, bankers, art galleries owners, programmers, fashion designers and "free thinkers" dominate every single facet of cultural life in the West, with the actual labor and the images of the complex machinery and industrial technologies being absent from socio-cultural "space" in the United States.

This teeny-weeny detail about modern "culture" aversion to any productive labor, since George Lopez spoiled brat niece Veronica's hysterical reaction to an offer to work at airplane parts plant, speaks volumes. Let's face it, we have an enormous number of people around who would faint at the very sight of your average run-of-the-mill CNC machine or paint booth in some large machine and production shop, as well as from the necessity to learn about safety on the production floor. It is so not cool, it is so not iPhone and orange mocha frappucino, it is so not progressive and sophisticated that life, as in real life, by definition cannot be happening there. But, as the story goes--it is precisely there where REAL life actually happens and where REAL value, as in crucial tangibles, on which civilization exists, are produced. Well, the United States in the last 20+ years was reducing these productive forces to a small fraction of what they used to be and, in doing so, also cleared the space for planting the most destructive and dangerous cultural practices, which now are in the symbiotic relation and mutual influence of those proverbial Marxist basis (foundation) and superstructure. They go hand in hand today with opioid catastrophe, rampant drugs use, overall degeneration of cognitive faculties of whole generations and, as the result, increasing number of almost insurmountable  hurdles towards the ONLY thing which may save this country--economic self-sufficiency.

Economic self-sufficiency which is also a foundation of REAL national security starts from industry. No industry--no American nation. Simple as that. Modern generation of American "elites" has no idea, or, possibly, doesn't even care about what happens when the attempts to re-industrialize fail precisely because no one knows how to do it for real, not by doing what they got used to do--"printing" money which only accelerates a decline, towards eventual disintegration. So, here it is--no real recovery without real industries, which translate into real employment, this means reorienting production for the internal market and.... here we pause, because this seemingly simple scenario requires a long and substantive debate because this is where the issue of trade comes in and 99.99% of the American "elite" are a free trade neo-liberal fundamentalists who have neither knowledge nor skills to avert what is already not just on the horizon but knocking on the door. If you think otherwise, just take a look at the graphs above, especially a 10 year one. Things just got worse, not better since 2010. I am sure vast number of events coordinators, DJs and shopping assistants will have to rethink seriously their career choices if they even want any shot at any vacancy in a dramatically shrinking America's basis, before collapsing superstructure buries them.
Posted by smoothiex12 at 1:36 PM