You know all my attitude in general towards Western "economic science", which, bar few exceptions here and there, is nothing more than a variety of iterations on monetary theory and, in general, is not economic, per se, but financial only at its very core. As an example--many those "economists" with degrees in "economics" from a variety of Western economics programs are primarily (not all) people who deal in stocks, currency speculations, cooking of books, fraudulent valuations--it is them who introduced risible $23 trillion US GDP to us--many of them are downright bankers who know debit and credit and bank operations but who do not operate and cannot operate (due to lack of background) in a much larger framework of real economy, real politics, geopolitics, power balance etc. Those skills require a completely different intellectual and (true) scientific training. In the end, recall Michael Hudson's recent succinct statement:

I happen to agree and may even add, that courses on physics, engineering, industrial design, real trade, foreign relations, organization of logistics, modern transportation, maritime security, military power also do not appear in economic textbooks. So, why have I brought this up, again.

It is a truism now that Western "intelligence" on Russia, quoting Patrick Armstrong, is "very bad", and this is putting it mildly. It is easy to explain--imagine some Western "educated" (quotation marks are deliberate) journo or "economist", people who understand only Wall Street "economic" realities and subscribe to Western "interpretation" of human rights, getting into Russia. They are immediately presented with the set of economic and human patterns they not only never encountered in their lives but never heard of them. Most of those people, in their attempt to get a grasp of that find those who are "culturally" close to them in Russia and this is precisely a narrow strata of fringe Russia's liberals (aka liberda) who use same lingo and value same things as those Western journos, economists etc. use and value. Bingo, it seems that the issue is solved. Well ...no. In fact, this modus operandi is precisely the reason behind Western "analysts" of Russia being a laughing stock and being incapable to find their own ass with their both hands in the brightly lit room, forget about making any sensible predictions (or forecasts) on Russia. They simply have no instrumentation for that. Enter RT's today's piece by Ben Aris.

I totally get it, that RT has to present a variety of opinions on Russia, including some which may not be positive at all, and we know that Russia is affected adversely both by Covid-19 and Oil Wars, but what Ben Aris of IntelliNews (formerly of Daily Telegraph) writes is a good insight into the minds and operational mechanisms of all kinds of similar fraudster publications pretending to provide "value" for "investors" (I know, it is such a funny term), Ben Aris "covered" Russia since 1993, and the term "covered" should be used cautiously here because British media are leading propaganda outlets in the West when providing a murky stream of BS. So, Ben Aris is no different and he opens with a broadside:

When the pandemic struck, Mishustin was still in the middle of reforming his team, and focused on a technical task: implementing the 12 national projects, not dealing with an economic meltdown. Ministers who performed badly when it came to implementing their policy goals have been sacked, and a new crop of bureaucrats was installed to take over. Mishustin drew heavily on his former colleagues from the tax service, which he ran to great effect for a decade. However, these people do not necessarily make the best HR choices when it comes to crisis management. Their skill has been to fine-tune the machinery of government to make it work more efficiently. The policies now needed are about squeezing an extra 5 percent of revenues out of VAT payments, not shock actions to put a floor under the collapse and reverse the fall.

Immediate first issue: Ben Aris, as well as most of his Western colleagues CANNOT have competent opinion on crisis management anywhere, let alone in Russia, because Western "economics" and experience knows only ONE way of dealing with crisis--it is to print money, period. The way even Covid-19 has been handled in EU and the United States is the best testimony not only to the impotence and incompetence of Western "elites", of which Ben Aris and his "way of thinking" are an exhibit A, but underscored a dramatic deference between the way Russian current elites and Western ones are brought up. One of those gigantic differences, which Aris never heard of, I am sure, is mandatory annual courses, ranging between two weeks-long to months, by top government officials and governors they take in the Academy of General Staff of Russia's Armed Forces. How mobilization plans are developed and implemented is also a thing Aris most likely doesn't understand, especially if one considers a collection of clowns running modern West today, they and Aris have common "education" backgrounds. So, Aris' any opinion on adequacy or otherwise of Russia's crisis management is as valuable as my opinions in Kabuki dramaturgy.

But Aris doesn't stop here and produces another peculiar point.

Putin is afraid the nationwide vote, now slated to happen sometime in the summer, could be turned into a referendum on his ability to deal with the public health crisis. And that could go badly wrong. Consequently, he has pushed the responsibility for dealing with the crisis onto regional governors, who have put in a mixed showing so far. But even this political damage-control move has already cost Putin politically. More Russians approve of local officials’ coronavirus-response efforts than they do of those initiated by the president and the federal government, according to a newly published survey from the Levada Center.

There is so much to unpack here in what is a characteristic feature of most Western media--making shit up or just simply lying--that we need to start with the data by Levada Center. Levada Center was officially declared in Russia a foreign agent (in Russian) and is a classic example of MO of Western NGOs around the world--growing own "dissidents" and then using them as data sources which are allegedly "reliable" and fit Western "perceptions". I wrote about this so many times that I do not see any reason to dwell on that for much longer. Aris' "independent pollsters" are provided for by foreign governments and NGOs. The only good reason of using anything from Levada Center and similar orgs inside Russia is in affirmation of positive. E.g. "even Levada Center cannot deny this..."  Of course, I am not talking about the fact that Aris does what people like him do--he misinterprets, lies that is, events suited to consumption by people completely isolated from Russia's realities. See highlighted in yellow. Obviously, Aris never took even basic course in civics in any Russian public high school and he doesn't know how many Federation subjects are there in Russia, from Districts, to Oblast, to Krai and who are in charge of those and what is their relation to Moscow, but it is expected from such journalists as Aris. So, he "discovered" suddenly that delegation of authority, which is in the foundation of any practical governing since the times of Roman Empire, to state's subjects is the evidence of... political damage control? Is this Aris dude for real? It is especially fascinating against the background of Putin being omnipresent in Russian media. Including TV. Like yesterday.

But our indomitable British journo doesn't stop here, he continues to misrepresent a situation and uses ephemera polls (polling is a fraud as an indicator in general, GIGO) to present what is not there forgetting what "Even Levada Center cannot deny..." Putin's still high level of approval which is almost 80% higher than disapproval. That is the only metric which matters. 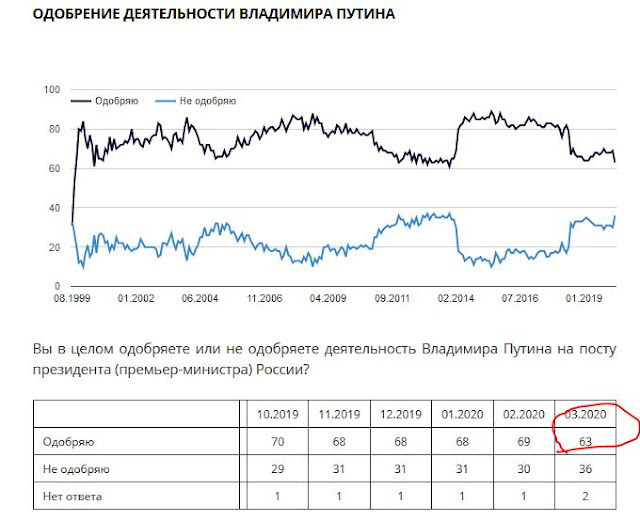 This is not to mention VCIOM's very own:

69% of Russians trust Vladimir Putin; 63.5% approve of his presidential performance.

So, what is exactly the problem here? A seasonal fluctuations of polls or that Russia's response to Covid-19 was extraordinarily effective? And even when Aris gets to more-or-less sensible argumentation (not that it is correct, it is not) he already "registered" himself at the onset of his piece as just yet another, run-of-the-mill, Russia "observer" whose only selling point is his fake "expertise" in interpreting political events in Russia from the Western point of view, which, as we could observe for years now, is nothing more than a wishful thinking by people who have zero knowledge and skills in fields which really matter for a nation such as Russia. In this case, the only question which remains is: will they ever learn? Why, in the same time, RT decided to publish this trash remains a complete mystery to me, albeit against the background of the collapse of Western economies and fraudulent "theories" behind them, any product of those in terms of world-view and "education", especially in relation to Russia, will come across as a pretentious ignoramus who needs to be pitied, not taken seriously. Or, maybe, to be taken as a necessary evil to remind us all how such "experts" royally fvcked Western civilization.