Everything One Needs To Know.

In many respects America's fate, even despite an economic calamity of a gigantic scale, was contingent upon bringing justice to those who unleashed unprecedented, historically, witch-hunt and mass-psychosis campaign. Anyone with an average IQ and even fleeting acquaintance with principles on which law operates knew and know where and who all those Russia, Ukraine and other "Gates" originated from. Well, it doesn't matter, evidently.

WASHINGTON (Reuters) - U.S. Attorney General William Barr said on Monday he does not expect a Justice Department review of the FBI's handling of 2016 election interference to lead to criminal investigation of former President Barack Obama or former Vice President Joe Biden. "As to President Obama and Vice President Biden, whatever their level of involvement, based on the information I have today, I don't expect Mr. Durham's work will lead to a criminal investigation of either man," Barr said.

Sad, but totally expected, to be honest.  Barr, however, made some clarifications:

Barr did not rule out the possibility of others being criminally investigated, without offering specifics.

We'll see about that, which, I am a bit on a shaky ground here, since Barr's statement is not born out by the reality:

Barr added that the election should be decided strictly on policy debates, and that any investigation of a political candidate would need to be approved by him personally. "We cannot allow this process to be hijacked by efforts to drum up criminal investigations of either candidate," Barr said.

Well, sure, we all know that Biden sonny's, Hunter, tenure with Ukrainian Burisma had nothing to do, like really-really nothing, with the fact of his senile cretin-father being Ukraine's Gauleiter not only on Obama's orders (Obama always was an amateur in foreign relations, not that there are any professionals in them in D.C. nowadays, but still) but on his own volition, being also an architect of a bloody coup and war there, having blood of thousands of innocent people on his wandering hands. This is not to mention that this coward is now hiding from exposure for his sexual exploits and, once those 2020 "elections" begin to delve into, quoting Barr, "policy debate" (Good ol' Joe cannot, fvcking orient himself in space-time continuum, let alone have "policy debates") we all can be 100% sure that sexual history of Joe will hit the "printing presses" of partisan media. So much for the "policy debate". But, as we all know, the land of the "laws" doesn't really hold up that well under the closer scrutiny. Evidently prosecuting corruption (sedition and treason is also not biggy anymore, evidently) in the US nowadays is contingent merely on who holds and how much power and influence. As Larison reports:

The president announced on Friday that he was firing Steve Linick, the State Department’s Inspector General. One possible reason that Linick was removed may have been that he was conducting an investigation into the bogus emergency declaration that the administration used to expedite arms sales to Saudi Arabia and the UAE last year.

If Linick was investigating the bogus emergency declaration, he would have come across reporting that showed how a former Raytheon lobbyist serving at the department was instrumental in pushing through the plan to expedite arms sales that benefited his old employer. He would have discovered that there was no genuine emergency that justified going around Congress. Once his investigation was concluded, it would have found that the emergency declaration was made in bad faith and that the law was abused so that the administration could proceed with arms sales that Congress opposed. Another reason for the firing was to protect Mike Pompeo from an investigation into the Secretary’s abuses of government resources for personal purposes.

We all know that a person who openly states that he "lied, cheated and stole" for a living as CIA's big honcho, is being truthful. How can anyone doubt Pompeo's truthfulness? Reality of the American political discourse, however, is such that one cannot stop wondering if any normal, not damaged mentally, people are left in D.C. I am sure many people around the globe ask the same question. American political "elites" today represent a gruesome picture. All politics, everywhere is a dirty business, always was and often it did attract people with serious psychological, if not psychiatric, problems. There is an excellent work titled The Psychological Assessment of Political Leaders: With Profiles of Saddam Hussein and Bill Clinton. It is long and, at times, tedious read including delving into this proverbial psychobabble, but it is unequivocal in singling out narcissism as one of the main features of Western politicians. Lust for power and narcissism. It is in the foundation of the explanation to the phenomenon of American politics driven by non-stop lowbrow "election cycle" circus. 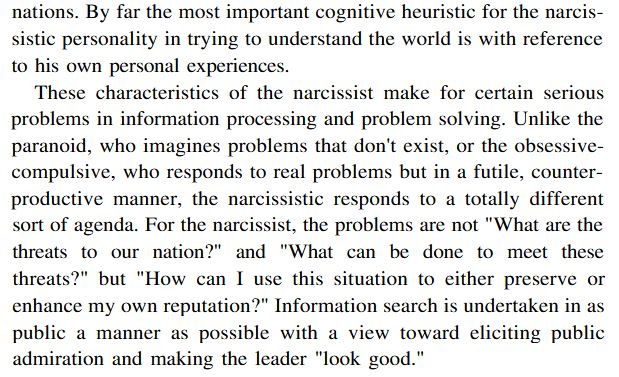 Once "look good" triumphs over all other considerations, the political class and its subservient media are doomed and so is the nation this political class pretends to lead. I am on record for years, that the only things US political class knows how to do is to "look good", unless they are caught in corruption or sexual scandal. And that is the problem--they are not caught often enough and this is everything one needs to know about present moment.
Posted by smoothiex12 at 3:28 PM