Finally! I Was Beginning To Worry.

I almost thought for a couple of days that I live in a different world and started to worry since my matrix began to disintegrate. And now I can exhale, everything is back to normal. Whew. First they understood it:

BRUSSELS/MOSCOW (Reuters) - Russia's military planeloads of aid to Italy to combat the spread of coronavirus have exposed the European Union's failure to provide swift help to a member in crisis and handed President Vladimir Putin a publicity coup at home and abroad. Italy has been thankful for the Russian decontamination units and army medical staff sent over the past four days, contrasting it with a piecemeal response by EU states. But senior EU and NATO diplomats and officials see the assistance less as generosity and more as a geopolitical move asserting Russian power and extending influence.

That, of course, was followed by La Stampa's piece that 80% what Russians sent to Italy was useless. Of course. Maria Zaharova was forced to comment on this "article" in La Stampa with only one question (in Russian): "Why does La Stampa use anonymous sources?" While the President of Lombardy Attilio Fontana was even more direct--he quoted Dante (in Russian): "They all are not worth the words--look at them, nothing to see." You can find proper translation if you get to Divine Comedy when you have the time. But, generally, everything is back to normal" "evil Rooskies", "evil plans by evil Rooskies" and "evil Rooskies' evil aid with evil plans in mind", and so on. Damage control, of course. Obviously La Stampa needs to recall this:
This is the monument to Russian Navy's sailors who rushed to help Messina and its inhabitants in 1908, after devastating earthquake.

The scale of the destruction caused by the Earthquake was so large that the contacts of the mainland with the city of Messina were lost for a few days and the Italian government was slow in sending a relief force. For at least a couple of days, the survivors of the earthquake were helped only by an international force, mainly composed of the sailors of four Russian military ships that happened to be cruising nearby. British and German ships also provided help and, subsequently, the Italian navy took over with a large relief effort. Still, it seems that the Russians did a lot and with great good will. We have little detail of the events of those confused first days, but some surviving documents of the time tell us much about the gratitude of the survivors. One note sent to the Russian consulate by the Pira family says, "Jesus is with Russia, thank you!" The Russian intervention was so much appreciated by the inhabitants of Messina that, shortly after the earthquake, the city enacted a decree that dedicated a square of the town to the Russian sailor and planned to build a monument to them. It took more than a hundred years to build the promised monument. It is hard to say exactly why it took so long but, eventually, it was done in 2012. Today, it stands, little known outside Messina, but a reminder of a story of human solidarity and friendship.

You may not know this, but Russians have this knack for being in the wrong place at a very right time. San Francisco can testify to this, not without a scandal, of course.

VALLEJO, Calif. —A gesture by the Russian government to honor six of its sailors who were buried in a San Francisco Bay area cemetery nearly 150 years ago is not sitting well with preservationists. The visiting Russian sailors died in 1863 while helping to fight a massive fire near San Francisco’s waterfront. They were buried at the Navy cemetery on Mare Island, where weathered, broken stone slabs marked their graves for decades. To honor their heroism, the Russian Consulate decided last year to buy new cross-shaped, granite headstones for the burial sites of A. Trapeznikov, K. Kort, Y. Bootorin and three unidentified sailors. But Vallejo officials and preservationists told the San Francisco Chronicle that the Consulate did not follow proper procedures for the oldest Navy cemetery in the West, which became a national landmark after it closed in 1921.

But by now we all must get used to acrimony in Russian-American relations. But here is the part which is most important. Relations are not only the governments anymore, they are also today between people. And, in fact, primarily between people. In case of Russian aid to Italy it is an absolutely overwhelming wave of love and support from Russians to Italians, who pay back in kind. You can see it everywhere--on every public forum. The atmosphere of mutual warm feelings between two peoples. Here is one example, from 2017:

Authorities of the northern Italian town of Vagli Sotto on Sunday unveiled a memorial commemorating Russian 1st Lt. Alexander Prokhorenko, who in 2016 called an airstrike upon himself in Syria after being surrounded by Daesh terrorists, Mario Puglia, the town's mayor, told Sputnik.

Here is this incredible monument. 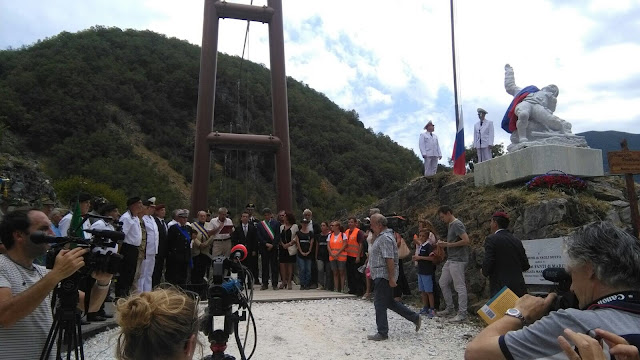 Now ask yourself a question--do Russians remember this gesture? Hint: this was covered by ALL major Russian media (minor too). Or do Russians remember who designed St. Petersburg for Peter the Great and Russia. Name of Rastrelli in Russia is next to the name of Peter the Great. So, let's put it in simpler terms--Russia and Italy are a bit closer than mere governmental, however important, relations. Do you think Russia's desire to help is purely for propaganda? Of course not. Western media, however, are nothing more than propaganda outlets with many creatures infesting them qualifying easily for the title of simple human ass-holes and whores. Not even in "journalist" terms, but namely--human. Take a look at NYT or WaPo, as an example. So, it is always pleasant to recognize that I wasn't mistaken in Western "free" media. Luckily, modern technology allows people to see each-other without media's distortions, due both to malice and sheer stupidity, and that gives some hope. After all, what can I say--since 1978 I am a passionate fan of Squadra Azzurra, from the times of legendary Enzo Bearzot, Dino Zoff, Paolo Rossi, to the times of Alessandro Del Piero and GiGi Buffon. There are many people like me in Russia and former USSR. So, how can one Juventus fan not help another Juventus (OK, Milan and Roma too) fan in time of need;))
Posted by smoothiex12 at 10:56 AM