Recall smug face expressions of all those financial "analysts" waxing economic when talking about prices and US Dollar, Bit Coin and other worthless papers. Where are they now, all those "analysts"?

It’s an honest-to-God doomsday scenario and the ultimate doomsday-prepper market is a mess. As the coronavirus pandemic takes hold, investors and bankers are encountering severe shortages of gold bars and coins. Dealers are sold out or closed for the duration. Credit Suisse Group AG, which has minted its own bars since 1856, told clients this week not to bother asking. In London, bankers are chartering private jets and trying to finagle military cargo planes to get their bullion to New York exchanges. It’s getting so bad that Wall Street bankers are asking Canada for help. The Royal Canadian Mint has been swamped with requests to ramp up production of gold bars that could be taken down to New York.

I don't understand, weren't all those "financial instruments" and "financial engineering" the wave of the future recently? Hm, why does gold suddenly look so "attractive". Of course such explanations:

“When people think they can’t get something, they want it even more,” says George Gero, 83, who’s been trading gold for more than 50 years, now at RBC Wealth Management in New York. “Look at toilet paper.”

same as the rest of the WSJ article with statements like these:

Gold is popular with survivalists and conspiracy theorists but it is also a sensible addition to investment portfolios because its price tends to be relatively stable. It is especially in-demand during economic crises as a shield against inflation. When the Federal Reserve floods the economy with cash, like it is doing now, dollars can get less valuable.

Can only inspire a smile, especially the phrase highlighted in yellow. For al those "financial specialists", who cannot bring themselves to say it, I will say it for them--the "dollars getting less valuable" is called INFLATION. "Dollars" getting less valuable really fast and continuing to do so non-stop is called HYPERINFLATION. And this is precisely the scenario which unfolds in a front of our very own eyes. It is, of course, worth mentioning, you know, a teeny-weeny fact, that for years now the price of gold was deliberately depressed while US inflation was exported globally, but, as you can see, the game is up. In the scenario where the real value of the US Dollar, world's reserve currency (not for long, methinks), is known to be way below of what it is being presented to the "investors", one stable commodity stands out--gold. It has been around for millennia and will continue to be a safe "financial" haven. Here is some spread on the gold reserves as of December 2019. 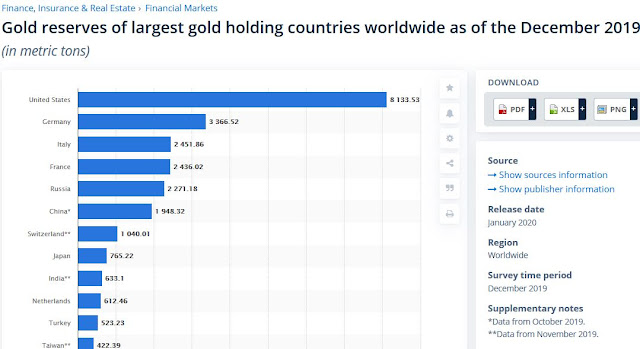 Today 1 ton of gold goes for roughly $52.3 million, so do your own calculations. Granted, one deals with actual, physical, gold, not some certificates which give an impression that one has any. You can look up a full list of gold reserves here. While looking at it, note the size of gold reserves of Kingdom of Saudi Arabia. Right: 323 tons. Compare this to Russia's gold reserves of 2,242 tons (7 times more than in KSA) and, against recent news on gold futures rising 9%, one can make a rough estimates of how well can either country weather oil prices collapse when Russia's gold reserves of roughly $120 billion worth of of physical gold provide (again roughly) increase of monetary value (it will grow even more soon) of 120 x 0.09= $10.8 billion of "free" money which, accidentally, is more than 10% of all value of Russia's oil (unrefined) export. Just like that. Saudi Arabia, meanwhile, having its unrefined oil export valued at $110 billion, will have about $10.8/7= 1.5 billion "gain" on its gold reserves, which also is merely 1.4% of "coverage" of its oil exports. See the pattern? I do not say that this is exactly how gold price affects things directly, but ratios presented here DO matter. They show why Saudis already lost heir oil war just on the gold price alone. Russia can afford to both accumulate and sell her gold, Saudi Arabia cannot.

Of course, we also have to keep in mind that Saudi gold, large part of it anyway, is most likely not even physically in the country. It is stored in the US and, as rumor has it, nobody knows actual amount of physical gold in the US. But my point is different here. It is about REAL valuation of gold and the fact that this shiny metal was and is real value, and will outlive US Dollar easily. It will also grow in value over the time since it is a very good cushion against economic upheavals of the scale we all are going through now. On the level of the state, the government, it is certainly true. I don't know how it affects individual "investors" (I am not in financial "advice" business) and it is not my job to know. But always remember: