Why Mathematical Models Break Down. And Why Our Life Depends On That-4 (An Operational Bypass On Syria).

You can find the last of this sequence here. Seeing some really crazy discussions and "concepts" floating all around internet regarding Russia's latest moves with S-300s in Syria, I feel, despite good advice of my publisher to stay the hell away from any mathematics, I have to make introduction to how operational level people think (you know, General Staffs, Staffs of Services etc.). I will rephrase an old proverb, that while amateurs discuss tactics, professionals discuss logistics to this: while amateurs discuss military technological gizmos, professionals calculate probabilities and Fractional Exchange Rates (FER). So, without much ado, let's immerse ourselves into wonderful world of REAL tactics and operations of the modern battlefield. We'll use only open sources (not that I know anything secret anymore, I am absolutely clueless) and very-very approximate assumed numbers. So here it is, my deepest bow to US Naval Postgraduate School in Monterrey, CA, Captain Wayne Hughes, Soviet/Russian authors and professors of Theory of Operational Research (Theory of Operations) and others who taught me (and others) how to fight modern war. 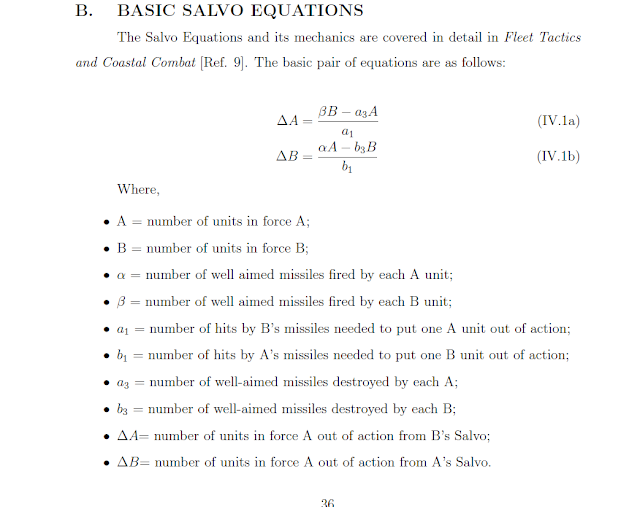 Here is a pair of basic Salvo Equations which give a good primer for understanding the general approach to the war among professionals and I want to state immediately--all those cute coefficients, all those alphas and betas are highly classified numbers, but as I stated-will use assumed (or sometimes off the wall) numbers. It is also instructive to recall, as I once was treated to one Russian military "expert" so called "calculations", that war is probabilistic in nature but if a single missile has probability of hitting a target equaling 0.8, it doesn't mean that the salvo of two same missiles will necessarily have an overkill with probability surpassing 1. Yeah, 0.8+0.8 =1.6 right? Wrong, not in Theory of Probability. Albeit many internet military "experts" think that this is the case--it is not. First, probability can never be more than 1, since event can only happen or not, in between it can happen only with some probability. Secondly, there are very many ways things progress or expected to progress. I, once, made a short excursion  into mathematical expectations. Those are hugely important.

So, I will leave for you to ponder those very easy equations and the meaning of coefficients stated--those will be crucial in understanding why and how competent militaries approach the battle and plan for it. So, enjoy, if you may, all this mambo-jumbo, hopefully tomorrow I will have more time to delve into it and explain (very primitively) why Israel is very very unhappy now.