A very good piece by Alastair Crooke on the situation around Syria and US, UK and other "democracies" preparing yet another false flag using, what else is new, own SOBs in a form of all kinds of Al-Qaeda-derived scum. Crooke makes this observation:

Evidently, Russia takes this US threat seriously (it has deployed 20 naval vessels into the E. Mediterranean, off Syria).  And Iran evidently takes the threat seriously, too. The Iranian Defence Minister on Sunday made a rapid unscheduled visit to Damascus in order to agree a tri-partite (Russia, Syria Iran) response to any US attack on Syria.

Russia does take this threat very seriously and positioned her naval task force in a form of a screen in case of expected and highly likely likely salvo of TLAMs and, possibly, depending on the circumstances attempts of carrier aviation launching their own stand-off munitions. Moreover, Russian naval exercises off Syria are more than just Fleet-In-Being demonstration of a naval force with a significant salvo--as such this force will have issues surviving when pitted against much superior US Navy's one or two Carrier Battle Groups. But here is the REAL build-up and there is nothing secret about it.

1. Russian naval task force operates still under significant and highly integrated AD "umbrella" with  land-based S-400 and S-300 in Syria and warning system, which includes air-space assets, such as satellite and A-50 reconnaissance capabilities being part of that.

2. Nobody knows the exact number of submarines in the area, but I would guess that Russian subs are represented in the area by more than just two, however good, newest SSKs of pr. 636.

3. Finally ground assets. Russia does have her own "aircraft carrier" in the area and its name is Khmeimim Air Base. I don't have the current number of the SU-27SM, SU-30SM and SU-35Ss available there, but even the regiment (24 aircraft) of such fighters is more than enough to mitigate any advantage a single carrier air-wing might present in case loonies in Washington decide to proceed with their strikes.

4. And last but not least--one can try to track (good luck with that) those MiG-31Ks armed with Kinzhals and TU-22s with X-32s, which I am sure do have all necessary data and, most likely some of them are already on immediate alert (combat watch--боевое дежурство), just in case.

And here is the main point. Crooke asks:

Who will blink first?  Netanyahu? Or will Trump surface from his domestic tribulations sufficiently, to take notice and to say ‘no’?

At this stage this whole thing is, indeed, reduced to purely DJT's "relation" with  his "team" he, incidentally, assembled himself (speaks volumes about him, doesn't it?); and this "team" is a collection of a complete, primarily neocon, nutjobs such as Bolton and which is utterly unqualified for any competent military or political assessment, once Mattis is excluded from the decision process. So, this brings fore an inevitable conclusion that Trump as a person is not treaty-worthy--basically whatever he says is a baloney and he is, indeed, as both Crooke and Lawrence Wilkerson point out is now a complete neocon asset. A defining feature of neocons is their lack of any situational awareness and even rudimentary military competence. Trump may not even know that somebody has to blink and he, certainly, has zero military background (where's Jimmy Carter when you need one).

So, what's left? I don't know to what degree this whole situation could be called a 'Suez' Event but it is surely one of many events demonstrating a complete mess within American political power-class in general and Trump Administration in particular.  Depending on the outcome of this whole "strike", granted it doesn't escalate into the serious clash between Russian and US forces, I think Russia will reconsider and will provide latest S-300s to Syrian Armed Forces--it is about time anyway. So, what is it going to be Mr. President Donald J. Trump--"peace on Earth", you so eloquently called for when you needed electoral votes in 2016, or Earth in pieces?

UPDATE: One of our participants, Evald, graciously allowed me to use his excellent graphics dealing with Russian forces and means in and around Syria, so I attach it here since it gives a very good spatial feel of the situation. Key term in all this is interaction (Vzaimodeistvie) of heterogeneous forces. 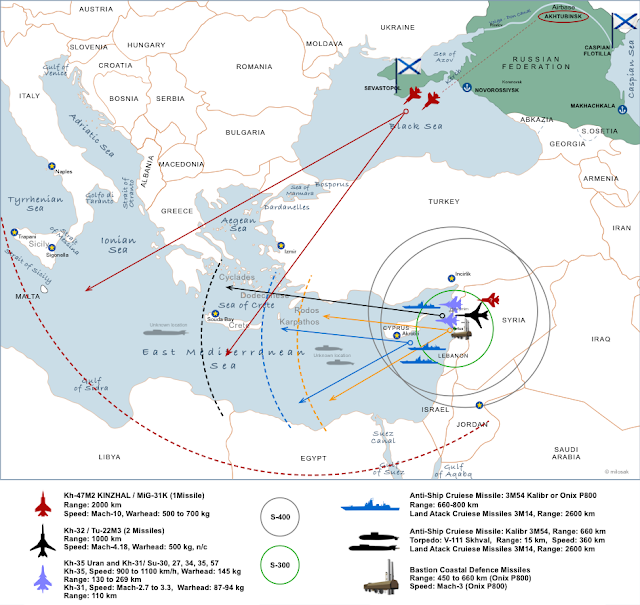