Why Mathematical Models Break Down. And Why Our Life Depends On That-2

So, let's be REAL now and, using our American-Chinese example of calculations of the Status S(t), go directly to the inherent weakness of this XM which we assumed equal for the United States and China. In reality, this index is radically non-equal, with the United States (for now) holding an overwhelming advantage over China in some key military aspects. If you go back to the formula you will see that it is not well thought out. We start, of course, with one thing which actually reduces large advantage the United States has over everybody else, since American M1 is largest in the world and by far. American military budget is colossal and on this merit it, as many math and economic purists would suggest, should clearly indicate American overwhelming military advantage over anyone. Indeed, if to follow SIPRI's numbers US military budget is $610 billion/$228 billion = 2.68 times larger than that of China and, considering the fact that in this formula:

Judging military capability by the metric of defense expenditures is a false equivalency. All that matters are raw, quantifiable capabilities and measures of effectiveness. For example: a multi-billion dollar aircraft carrier that can be bested by a few million dollars in the form of a swarming missile barrage or a small unmanned aircraft system (UAS) capable of rendering its flight deck unusable does not retain its dollar value in real terms. Neither does the M1A1 tank, which is defeated by $20 worth of household items and scrap metal rendered into an explosively-formed projectile. The Joint Improvised Threat Defeat Organization has a library full of examples like these, and that is without touching the weaponized return on investment in terms of industrial output and capability development currently being employed by our conventional adversaries.

Basically, Waddle's succinct observation boils down to the rejection of the monetary (false) "value" of the military and to the implicit call for looking at:

1. REAL capability and REAL effectiveness, which are (see below) matters of….
2. Doctrines and of Tactical, Operational and Strategic concepts, and…
3. Technological and procurement policies.

Once those things, INSUFFICIENTLY spread among M2, M3 and even M4 (nukes) "potentials" (where Air Forces and Air Defenses have been lost in this formula—is a mystery), are considered one begins to really question the whole wisdom of a direct monetary relation between expenditures. Here is a demonstration of a fallacy of such an approach which absolutely, even when using a "Potential" index, reflects a complex relation between real capability and "Potential". Let's get away from China for a second and get to a now classic example of highly misleading M1 index. 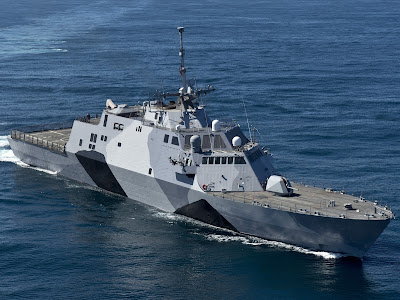 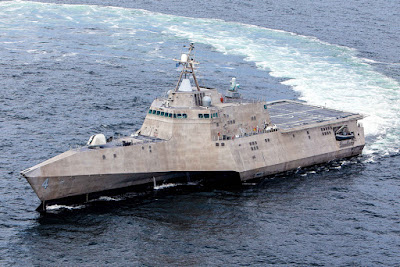 The US Navy has both active, building and orders for 29 of those Littoral Combat Ships. We are going to round up costs of these ships to about $650 million a pop for either version and based on that we may calculate the cost of the whole program: $650 mil * 29 = $18.85 billion. Everyone knows by now that these ships are known sarcastically as "self-propelled 45-mm gun". A very expensive, I may add, 45-mm gun. This is not to mention never-ending issues with Combat Modules and other "lovely" things these, otherwise nice looking ships, became known for.

This ship, which costs approximately $300 million boasts not only deadly long range anti-shipping and land-attack missile complex, it also has a very respectable air defense and is equipped with 76-mm gun, not to mention a state-of-the art EW complex among many other features. Currently 9 of 18 planned are already afloat or are being built. So, the cost of the whole program, thus, is $300 * 18 = $5.5 billion. Let us recall here also 11 active or being built, even less expensive, albeit still very impressive Project 21631 Buyan missile corvettes—those will run within (plus-minus) $200 million price-range. The program cost: $200 * 11 = $2.2 billion. Add two programs (incidentally—same 29 ships as LCS) together: $5.5 + $2.2=$7.7 billion. Comparing the two classes (programs) is easy: US Navy spends $18.9 billion for ships none of which would survive encounter with any group of Russian missile corvettes which will meet LCS precisely where LCS title (Littoral Combat Ship) suggests it should operate—enemy's littorals. This is, of course, if we are talking about a completely improbable scenario of LCS engaging Karakurts in naval combat, since such an engagement is simply inconceivable—in case of serious war LCSs will be sunk, with no chance of defending themselves, by modern long-range anti-shipping missiles from platforms hundreds of nautical miles away.

But comparison of the "potential", however, is legitimate here and precisely for the purpose of getting anywhere close to some numerical coefficient which will be appropriate for comparison and adjustment of the "potentials" or "combat capabilities". Comparison of LCS and of Karakurts (and Buyans) is simply a good example and here is the issue—yes, we may easily come to the monetary ratio of the costs: $18.9 billion/$7.7 billion = 2.45. That is, Russian Corvettes program is to LCS program (in US Dollars) as 1 to 2.45. But that is the issue here and that what Captain Waddle talks about and that is what I wrote the book about—combat capabilities of Karakurts dwarf those of LCS, which are way more expensive than those incomparably more capable, and less expensive, and dangerous Russian ships. If you think that the comparison here must go by mere counting of missiles on the ships (well, LCSs do not have any), or by caliber of the gun—think again. Real comparison starts with those funky and highly classified mathematical expectations for each of the missions and those vary wildly and dramatically. About this—later but some hint--it is not at all linear.