WASHINGTON — President Trump suggested a dramatic reordering of the global order as he departed for a G-7 summit on Friday morning. Speaking to reporters before boarding Marine One to head to the meeting in Canada, Trump suggested that Russia be allowed back into the group of the world’s top economic powers, which currently includes the U.S., Canada, France, Germany, Italy, Japan and the United Kingdom. Russia was previously a participant in the group, which was known as the G-8 or Group of Eight, but was ejected in 2014 after its invasion and annexation of Crimea, a province of Ukraine (LOL--this is my italics).


Meanwhile Ria.Ru ran the poll on the necessity of Russia getting back to G8. Here are how the questions (top-bottom) sounded like:

Now see for yourself: 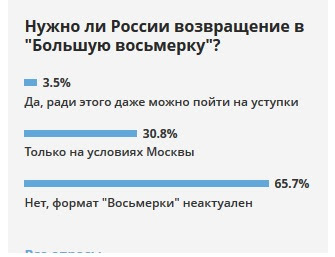 P.S. Per highlighted in yellow, I have some news for journos who wrote that--global order has been reordered and changed for quite sometime now. But then again, Western journos' defining trait is their ignorance. so, no surprise here.
Posted by smoothiex12 at 9:47 AM