They Begin To Suspect Something...

You know The Hill, this collection of "experts" from D.C. is grinding its teeth.

The looming Russian oil price “cap” has all the hallmarks of a historic debacle in the making. For months, the United States and the G-7 have haggled over a complex plan to constrain the money that the Kremlin makes from some of its oil exports. With a looming deadline to loosen oil sanctions just days away, policymakers should dump the plan — as it will do little to hasten an end to the war in Ukraine. The problem is money. Despite Russian President Vladimir Putin’s brutal war against Ukraine and subsequent Western sanctions on his regime, Russia is swimming in petrol dollars. By the end of the year, the Russian Economy Ministry estimates that the country will have made a record $338 billion from its energy exports. This money supports the Russian economy, buoys its current account, and – less directly – helps to finance Putin’s war against Ukraine.

The desperation oozes from this piece. The author, however, asks a self-evident question which didn't occur to Washington's "planners" who still reside in alternative economic and military reality:

The most obvious flaw in this scheme was Russian participation. What if the Kremlin refused to abide by the arrangement, as Russia recently hinted? A second snag was the price cap itself. If it was too high, Moscow would generate outsized petrol profits to fund its war against Ukraine. Technocrats from participating G-7 countries were tasked with determining a “capped” price for Russian crude and, at least in theory, updating it to follow changing market conditions.

No shit, pardon my French. And no, Russia didn't "hint" but explicitly stated that, with latest being today:

Translation: “We are working on mechanisms to ban the use of price cap instruments (from the English “price ceiling.” — Ed.), no matter what level is set, because such interference can only lead to further destabilization of the market and a shortage of energy resources, lower investment," he explained, adding that this would affect not only oil, but also other products traded on the market both in Russia and in other countries.

I think this cannot get any clearer than that. Unlike the author of this article in The Hill, Peter Doran, who is your typical academic waste from the US dismal "diplomatic" corps not to mention dumbing down through some "Russia study" fraudulent program of the ASU, Mr. Novak knows what he is talking about because he successfully worked at the position of Russia's Energy Minister for 8 years and now serves (last two years) as a Deputy Prime-Minister. So, when Novak speaks, the whole world listens. This is not an exaggeration.

Doran, however, being an uneducated hack, which is a common trait among 99% of the American "Russia experts", still tries to convince himself and those who imbue the BS The Hill publishes 99% of the time, that his personal Russophobia and lack of intellect may somehow influence outcomes. I know, he never read War and Peace.

If the Russian oil price cap fails to materialize or work as officials intend, the United States and its allies should drop the scheme and keep to their previous, more aggressive sanctions policy. Washington should likewise prioritize efforts to fully open the taps of U.S. domestic energy production while holding together the coalition of countries that signed up for America’s sanctions regime on Russia in the first place. We should deny Russia the “sinews of war” – the petrol dollars that it needs to sustain its invasion of Ukraine – instead of haggling like merchants in a bazaar over exemptions to a strong sanctions policy.

Obviously, having zero academic and practical experience in serious industries and policies, Doran cannot understand that he plays on the chessboard with a few minor figures left, while Russia plays with almost a full set. But as I already stated--you cannot explain those things to most US "experts", because they do not teach real history, real economy, real military art, let alone real Russia in the vast field of a fraudulent "humanities" programs in the United States. Hence such a desperation.

But if you think that Doran has some practical suggestions, other than beaten to death recipe for more sanctions, in terms of denying Russia her immense cash flow, you should get a load of this--a new way to hurt this damn dictator Putin and those nasty Rooskies. You can always count on British to take it to the limit: 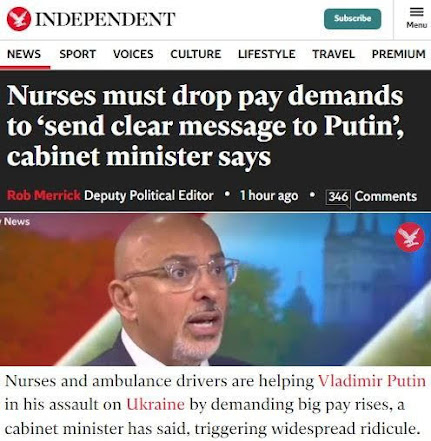 I don't even know how to comment on that, other than repeating what I say ad nauseam--Western "elites" are morons and they are desperate. Obviously, the cause of desperation varies from nation to nation, but in general none of those "elites" can change the course away from a catastrophe which is unfolding in a front of our eyes. It is a runaway train in the process of getting off the tracks. Hence sheer cretinism in public reactions to the reality. I am on record--while you still can get a decent STEM and natural sciences education in the West--no, not this undergraduate BS, but a grad and post-grad levels--the field which used to produce able policy makers is done, it is a wasteland which is responsible for emerging political "elite" which is utterly incompetent across the board. This is a bad news for the combined West and nothing can save Europe, while the US is in the process of losing last vestiges of its, always grossly exaggerated, power. Let us go hungry to "send clear message to Putin." This is the only political tool left for the West...
Posted by smoothiex12 at 1:39 PM