... which is absolutely normal for her kind who are into whitewashing crimes against humanity and war crimes for State Department. And lying for the top US bureaucrats, especially from neocon infested State Department, is absolutely normal. Not to mention the fact, that many of them themselves are war criminals. In general, Ben Schaak is typical for American political shyster lawyer.

While acknowledging concern over videos that showed Ukrainian forces executing captured Russian soldiers, the US war crimes envoy has argued that allegations against Kiev’s forces pale in comparison to Moscow’s alleged atrocities. “We are obviously tracking that quite closely,” Beth Van Schaack, US ambassador-at-large for global criminal justice, told reporters in a telephone briefing on Monday. “It’s really important to emphasize that the laws of war apply to all parties equally, both the aggressor state and the defender state, and this is in equal measure.” However, Van Schaack added, “when it comes to the war in Ukraine, that’s really where the equivalency ends. When we’re looking at the sheer scale of criminality exhibited by Russian forces, it’s enormous compared to the allegations that we have seen against Ukrainian forces.” The envoy also claimed that Kiev has dealt with allegations of wrongdoing more responsibly. “Russia inevitably responds with propaganda, denial, mis- and disinformation, whereas the Ukrainian authorities have generally acknowledged abuses and have denounced them and have pledged to investigate them,” she said.

Of course, being a shyster from organization which produced time after time one genocidal maniac after another--Madeline Albright and 50 US "diplomats" come to mind immediately--Van Schaak wouldn't last a minute under serious scrutiny against real war crimes lawyers from Russia, because she has nothing but PR BS and never opened in her life any Combat Manual of Russian Armed Forces (she wouldn't know the difference). But then again, for anyone with the pedigree in ICC on Yugoslavia, this must automatically disqualify them as, in best case scenario, liars or, in worst for them, war criminals themselves. But I digress. 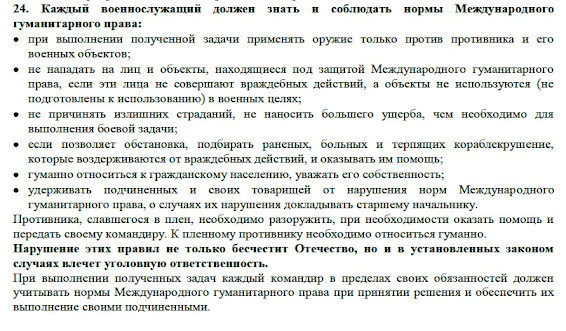 This creature, obviously, misses something larger than her pseudo-humanitarian activity and this is the fact that not only the names of those who executed Russian POWs (as well as of many Nazis US State Department supports and who committed well documented atrocities on industrial scale) are well known to Russians. But here are some news for this creature: Russian POWs were executed (there are many incidents of torture, maiming etc.) by the members of the 80th Brigade of VSU, which, surprise-surprise, was "taught" by the members of the USMC, who "taught this brigade to hate everything Russian" and "brainwashed them" (in Russian). It is now reported by all major Russian media and for me, personally, will be very easy to explain to this lawyer where this visceral Russophobia, from what sources, originates among US establishment and part of the military.

The fact that US Marines haven't fought any serious enemy since Vietnam, not to mention the fact of "stellar" performance against Taliban, among other opponents, explains extremely well a severe case of Kubler-Ross transitions, when the whole USMC is forced to recognize that it is simply not a competitor against serious combined arms force. Don't listen to me, listen to Colonel Douglas MacGregor who exactly 10 years ago called US Marines exactly what they are in relation to even semi-serious, forget real, war with real opponents. Get a load of that:

Marine Commandant James Amos’ recent remarks on the future of the corps can be summed up as: nothing new. In shorthand, “Rah, rah, the Marine Corps is awesome, and all we have to do is make sure they have the equipment & training & facilities they need so they can always be awesome Marines, rah, rah!” Wrong. The Marines as currently organized and equipped are about as relevant as the Army’s horse cavalry in the 1930s and the Marines are not alone. They have company in the Army’s XVIII Airborne Corps.

Yeah, rah, rah and BSing is what the United States institutions have been involved since the collapse of the Soviet Union with. And it is one thing when some obscure Russian dude says it--totally another when former senior advisor of the Chief of Pentagon and decorated combat senior America officers says it. And says he does.

The capability to come ashore where the enemy is not present, then, move quickly with sustainable combat power great distances over land to operational objectives in the interior, is essential. The Marines cannot do it in any strategic setting where the opponent is capable (neither can the XVIII Airborne Corps!). The Marines cannot confront or defeat armored forces or heavy weapons in the hands of capable opponents. Nor can the Marines hold any contested battle space for more than a very short amount of time, after which the Marine raid or short stay ashore is completed. ... Clinging to the misguided, wasteful and self-defeating policies of occupation in Iraq and Afghanistan as justification for no change in the Army and Marine forces is not an argument. The policies, strategy and tactics were flawed, if not disastrous. Reenacting these operations is about as stupid as reenacting Tarawa, Market Garden or the airborne assault on Crete. In 110 days of fighting the German army in France during 1918, the U.S. Army Expeditionary Force sustained 318,000 casualties, including 110,000 killed in action. That’s the kind of lethality waiting for U.S. forces in a future war with real armies, air forces, air defenses and naval power.

Moreover, this was published in the US premier magazine, Time. As SMO demonstrated perfectly well, to the astonishment of Pentagon's top brass, what Russian force, initially three times smaller than VSU and its NATO "volunteer" corps, did is simply beyond fighting capabilities of not just USMC, but the US ground forces as such. The issue of facing a serious war, unlike the US experienced only in Korea, exacerbated by the not only Pentagon's (NATO) operational rigidness but a dramatic technological lag in some of the key aspects of the large combined arms operations, especially when stand off weaponry and air defense, among few other important things, are concerned, created a severe case of professional jealousy and one of those Kubler-Ross stages--a stage of anger. While US "diplomacy" today, as it exists, is primarily a butt of jokes around the world due to America's "diplomats" ignorance, incompetence and lack of general culture, militarily the United States continues to fall behind Russia in the arms race and already is ultimately incapable to take on either Russia or China, let alone both.

I can only imagine what toxic Russophobic atmosphere exists in some parts of the US Armed Forces, who, by the nature of their service, have to be aware and content with what is being done to the force as a whole turning it into the woke circus, and, of course, being aware of many myths of American military superiority being destroyed time after time by those damn sub-human Rooskies. It is not a healthy atmosphere and it is bound to manifest itself both deliberately and subconsciously in growing hatred for everything Russian, including Russian civilians. It is, in some bizarre sense, normal reaction, which does not make it right nonetheless. Russians just keep the score. And a huge arsenal of state-of-the-art stand-off weapons, together with increasing production of Air Defense systems and other military toys which, as I predicted years ago, completely devalued both technological and operational dimensions of the "American Way of War", which failed time after time even against weak opponents and which is not designed for real modern war against first rate enemy. Not to speak of the titanic existential struggle against the nation which is much older than the US and saw and defeated enemies, when adjusted for the factoring out nuclear deterrents, who would make the "finest fighting force in history" a rather timid challenge. What's left, then? Yes, hatred.

Ask tortured to death, castrated, beheaded, raped, sold into slavery even crucified Russian soldiers and civilians in Chechnya in 1990s, ask innocent children of Beslan slaughtered under tacit approval of Western media and establishment. Today it is Nazi regime in Kiev. It is metaphysical and spiritual problem of the declining West and its relation to historic Russia, and of which some second rate lawyer from State Department simply has no grasp, nor morality and ethics to admit to herself that she and her "colleagues", culpable in millions of deaths of innocent people around the world, are supporting Nazism and that it is they who will be judged as criminals not just by the cruel court of history but, under some fairly likely circumstances, by the real court for war crimes and crimes against humanity. But then again, can you imagine trying to explain to a lawyer what the global balance of power is?