Not May, But Will.

They really are that stupid.

Some of the anti-Russia sanctions that were predicated on the Ukraine crisis may remain in force even after the conflict ends, a top official in President Joe Biden’s administration has told the Wall Street Journal. “We would probably feel, given what’s happened, that probably some sanctions should stay in place,” US Treasury Secretary Janet Yellen said on Sunday in an interview on the sidelines of the G20 summit in Indonesia. She claimed that Russia hasn’t made any effort to seek peace talks “on any terms that are acceptable to Ukraine.” Yellen’s comments suggest that Washington may undertake a long-term campaign to “squeeze” the Russian economy, rather than merely trying to bring the Ukraine conflict to an end, the Wall Street Journal said. Any peace deal would involve a review of the penalties that the US and its allies have imposed on Moscow, Yellen said, adding, “I suppose in the context of some peace agreement, adjustment of sanctions is possible and could be appropriate.”

They think they play sophisticated game, while in reality they play in a sandbox with kids' scoops and buckets. It is also difficult to explain to an average US politician what real warfare is.

Some US lawmakers have called the crisis a “proxy war,” saying it was an opportunity to invest in the destruction of Russia’s military without losing American troops.

I am now nearing an exhaustion pointing this out--we have to accept the fact of the American geopolitical and many military "professionals" being simply inadequate for grasping realities on the ground, so to speak. Russia was preparing for not just living under sanctions--she always lived like that--but for decoupling from the West since 2008, accelerating the process since 2014. Russian know what IS the game in the West and that is why the West is going down as I type this. When even shills like this begin to smell reality:

Europe needs greater autonomy from the US in order to stop worrying so much about the outcome of elections, the French foreign minister has argued. Catherine Colonna also stressed that trans-Atlantic ties should remain strong. In an interview with Le Parisien newspaper published on Saturday, Colonna was asked for her views on the US midterm elections. The minister described the race as “interesting,” noting that the Republicans have not performed as well as predicted. The diplomat highlighted Europe’s reaction to the results, saying: “if [they] do not want to be held in suspense at each American election, they must find the path to greater autonomy,” although this “does not mean greater distance from the United States.”

I have the news for her:  Europe will do as told and France, which does not exist as France anymore, especially so. Or... I am not going to speculate what is the deal today with what seems to be a terrorist act in Istanbul, but anyone in Europe who dares to do (BSing is totally different affair) anything practical, however late it is, in terms of regaining any kind of sovereignty will learn really fast what it means to not obey orders. Another matter, Turkey is openly now in close ties with Russia (some see it eventually as economic and semi-military alliance in the future), France is not--she is Russia's enemy. Unlike Germany which was destroyed culturally and psychologically by the US, and now being raped economically, France surrendered her sovereignty completely on own volition. So, anything coming from Paris in terms of policy on the international arena is risible.

But, but even these pathetic timid attempts by Europeans in finding their own voice (good luck with that) are a very serious indicator that they see the demise of Washington. After recent midterms it becomes clear that the US is not a coherent nation and that political system is completely broken, even when one assumes that DNC is not involved in electoral fraud. Per economy and MIC, here is everything one needs to know, especially after shocking for some GAO Report. CNN reports: 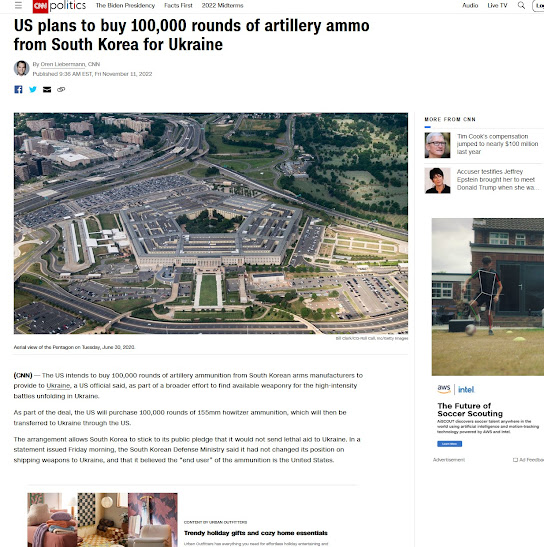 Putting it in layman's lingo--the US has no industrial capacity for a serious war. Simple as that. That is why, while the US lasts as  the "leader of the free world", Russia will continue to live under sanctions and Russians are perfectly OK with that. It is the ONLY tool in US arsenal ("of democracy") because the US of titans such as FDR or Ike is no more. SMO, meanwhile, continues and will continue until all Russia's geopolitical objectives are met, sanctions or not.
Posted by smoothiex12 at 1:44 PM