... there are some issues with basic arithmetic operations--you know, basic counting--with many a top US brass.

US Defense Secretary Lloyd Austin has lauded Russia’s armed forces and weaponry on Saturday – but added, however, that such military might has not enabled Moscow to achieve victory in the Ukraine conflict. “You know, the Russians have a massive military and impressive weapons,” but this “hasn’t helped them prevail in a campaign of conquest and cruelty,” Austin claimed, speaking at the Halifax International Security Forum in Canada on Saturday. According to the official, “it’s about the cause,” as well as “those who fight for it.” The secretary of defense went on to praise President Joe Biden for rallying “nations of goodwill” against Russia’s attempts to “redraw borders by force.” Austin also said the US will stand by Ukraine as long as the conflict lasts, insisting that the outcome will “determine the course of global security in this young century.” He added, however, that NATO will not be dragged into what he described as the “worst crisis in [European] security since the end of the Second World War,” unless Moscow attacks one of its member states.

But then again, there is a school of thought, and I mean it, that views Vietnam and even Afghanistan as the American victories. But the fact that "massive military" of Russia didn't even engage in Ukraine goes somehow missing in the top political echelon in the US, same as the fact of Russian forces from the inception of SMO being outnumbered. Not to mention the fact of Russia "running out of" missiles, ammo, tanks, what have you, non-stop since March.

Of course, we all understand that all these grandiose statements from the West are mere smoke and mirrors which show a complete loss of a plot, since all Western "plans" on Russia's military and economic defeat fell through, precisely due to Western "planners" inability to count, calculate and learn. So, now Austin, as well as other top American bureaucrats need to somehow save face by means of:

1. Restating their desire to avoid the direct conflict with Russia;

2. In the same time continue to support their beloved Nazis in Kiev.

“Everyone is tired of the Kiev regime. Especially of the neurotic Zelensky, who is constantly whipping up tensions, whining, sniveling and extorting more and more money and weapons handouts. [He] acts like a hysterical child with developmental problems,” Medvedev stated. Fatigue with Kiev and its actions is prompting the collective West to “push” Ukraine into talks with Russia, the deputy head of the nation’s Security Council continued. “The US, NATO and the European Union do not want a complete rupture with Russia, risking a third world [war]. Hence, the frequent attempts to rein in Kiev and bring it to its senses, to push it to negotiate,” Medvedev wrote. By refusing to talk with Russia, Zelensky is actually pursuing much more mundane and selfish goals, Medvedev suggested. He added that “if [Zelensky] does not accept the reality of Ukraine's collapse, it is pointless to sit down at the [negotiating] table. And if [he] does accept it – he will be taken out by his own nationalists, who are intertwined with the army top brass.”

Pretty self-evident, but if not a complete rupture, but something very near to it already has happened between Russia and the combined West. While the "status" of the United States as the existential enemy of Russia was clear since the end of WW II, it is a new paradigm for, say, France and Germany being viewed by Russians as existential enemies of Russian people and this is the only way EU and its two most important constituents MUST be viewed and acted upon. In other words, Russia has to navigate here between Scylla and Harybdis of necessity to have Europe more or less stable, while making sure that both France, Germany (obviously, UK) are reduced to mere regional military powers without ability to generate any kind of credible threat to Russia. Russian-American dialogues is a different matter--these are relations between two major players, while lapdogs must be removed from the room.

Pepe wrote an excellent piece for The Saker's Blog on such a matter:

It is safe to say that the G20 may have plunged into an irretrievable path toward irrelevancy. Even before the current Southeast Asian summit wave – in Phnom Penh, Bali and Bangkok – Lavrov had already signaled what comes next when he noted that “over a dozen countries” have applied to join BRICS (Brazil, Russia, India, China, South Africa). Iran, Argentina, and Algeria have formally applied: Iran, alongside Russia, India, and China, is already part of the Eurasian Quad that really matters. Turkey, Saudi Arabia, Egypt, and Afghanistan are extremely interested in becoming members. Indonesia just applied, in Bali. And then there’s the next wave: Kazakhstan, UAE, Thailand (possibly applying this weekend in Bangkok), Nigeria, Senegal, and Nicaragua. It’s crucial to note that all of the above sent their Finance Ministers to a BRICS Expansion dialogue in May. A short but serious appraisal of the candidates reveals an astonishing unity in diversity. Lavrov himself noted that it will take time for the current five BRICS to analyze the immense geopolitical and geoeconomic implications of expanding to the point of virtually reaching the size of the G20 – and without the collective west.

My only disagreement with Pepe's otherwise superb piece is the use of a meaningless GDP metric. US GDP IS NOT $23 trillion, never was, it is at best, in real terms, half of that. Not to mention this ever critical issue of the structure of the national economy. By far more important tangibles than abstract dollar figures define the size and complexity of any economy in the foundation of which are natural and human resources and industrial capacity, physical economy that is.

Here are, again, just a couple of critical metrics defining the actual state of play. They changed in 2022 insignificantly, except, and you may have guessed it--for Europe. 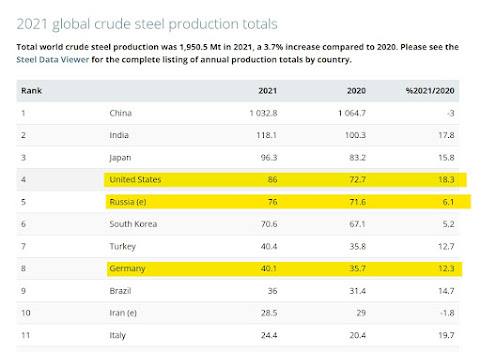 This one is even more important: 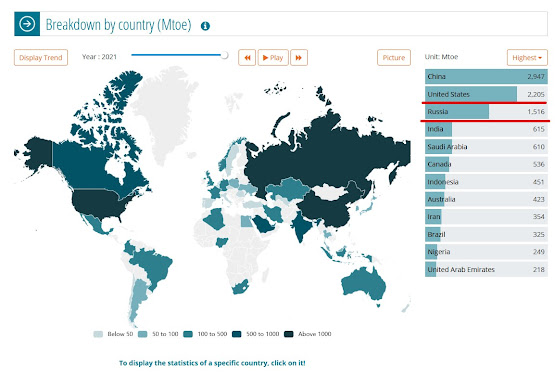 If you are in the top 5-6 in this table, you WILL have industrial development, you will have advanced aerospace programs, advanced militaries and a decent standard of living. Do you see any European country there? There you go. So, expect final, annual (12 Mo) industries, from steel, to energy, to machines, reports in January 2023 and you will see yourself this funny dynamics. So, this is your Sunday's primer.
Posted by smoothiex12 at 12:12 PM