Good Statements and Not So Good Lessons.

For starters, Larry penned an excellent piece regarding Kherson situation. Here is an excerpt.

So why is the withdrawal from Kherson being touted as a disaster for Russia and glorious victory for Ukraine? Because it looks bad. Got that? It makes it look like Russia is losing or running away from a fight. People offering this type of criticism are like the cretins you knew in middle school who would gather in a circle and shout at two of their compatriots to “FIGHT.” Yet, not one of the hecklers had the stones to step into the ring and throw some punches. I am not trying to read some deep, hidden meaning in the Russian action. I take Generals Surovikin and Shuigo at their word. Keeping Russian troops on the west bank with their back to the river created a risk that, in the event of Ukraine launching a major attack accompanied by blowing damns up river, the soldiers would be trapped and forced to fight without a reliable line of communication.

Read the whole excellent piece by a professional intel analyst (emphasis on professional) and recall that Surovikin in the first day of his command of SMO announced that some "difficult decisions are coming". This was announced on October 8th and since then Russia was evacuating Kherson civilians non-stop. The hope was that Surovikin will not have to do it but he had to. Optics of it is bad and in terms of military lingo it is a tactical-operational setback if one considers the main objective of the war just conquering and holding territory, which it IS NOT--I stress it. Larry gives the whole situation excellent treatment in his piece and that is why it is a GOOD statement from him. Good, because it is, and you have guessed it, professional.

Now to not so good lessons. I have though say thanks to Joe Blanco for bringing it up because it is a good issue to discuss. Joe wrote, when speaking of Great Patriotic War:

Russia does not need to look so far back to have learned that going in light, since the beginning of the SMO, would be a bad idea. All Russia had to do was study the Iraq War (2003-2008) when the US thought they could conquer the country with only 160,000 soldiers. Rumsfeld thought that a new slimmed down military could easily take Iraq. Well, at first it seemed to work, but then the Iraqi's rebounded and started the so-called insurgency thus proving going into a country of 25 million with only 160,000 men was a bad idea from the start. The US then had to continually increase troop strength to finally beat back the Iraqis. Fast-forward to 2022 and Russia goes into a country the size of Texas and has the 2nd largest army in Europe knowing the West will fully back Ukraine, with only 180,000-190,000 men. One would of thought Russia should of known better. Russia seems to be continually playing catch-up due to the mistake of going into Ukraine with so few men.

On the surface, Joe's "argument" seems valid, for non-professionals, but in reality it is grossly flawed. That is why I asked him to present at least three strategic differences between US campaign in Iraq in 2003 and SMO. The differences are profound. Here are just some of them:

1. Iraqi Army circa 2003 was a ragtag force, totally demoralized, corrupt and utterly under equipped, especially in C4ISR realm and with virtually no viable air defense. Iraq was simply crashed by sanctions and had no access to even basic resources. This is absolutely not the case with Ukraine which is de facto a NATO force and NATOization of the VSU continues apace, with second iteration of VSU--the first was obliterated by the end of Summer--having, however waning now, support of the combined West. Feel the difference. VSU is the best proxy US and West ever had.

2. US in Iraq 2003 pursued a strategy of a full occupation of the country with parallel regime change. Russia only recently, in a view of NATOization of the conflict, decided that she wants a destruction of Kiev's regime. But, Russia is NOT interested in occupation of the whole of Ukraine--the hope which NATO planners had from the start of SMO.

3. Iraq, having GDP PPP smaller than that of the state of New York wasn't even competitor, the scope of resources involved and the political, economic and military weight of warring sides is immense. With Russia's massive economy and industry engaged in the operation, with the indirect help from China, while on the other side Russia fights combined West with its gigantic, albeit fast depleting, resources.

4. In the end, the main objectives of the warring sides are: for the US--a preservation, however impossible, of its hegemony, for Russia--a destruction of globalism and unification of the Eurasian realm into massive economic force. US Iraq's adventure was an Exhibit A of Ledeen Doctrine: “Every ten years or so, the United States needs to pick up some small crappy little country and throw it against the wall, just to show the world that we mean business.” Today's events are orders of magnitude larger than any Iraq and Afghanistan campaigns, utterly embarrassing for the US, and are about effective survival of human civilization as a concert of nations who respect their own history and national traditions. For that, the combined West must be defeated. The scale of a struggle is titanic and truly global.

I can continue to list those differences for hours and that is why I always stress that historical lessons should be applied very cautiously, not to mention professionally. That is why Alexander Svechin's strategic truism is truism: "Each war represents an isolated case, requiring an understanding of its own particular logic, its own unique character." That is why applying "lessons" from the US Iraq's adventurism is a very wrong way to go about SMO. You cannot apply "lessons" from Iraq to SMO, especially because--and here comes the most important difference--even today Ukraine has millions of people who identify themselves as Russians and preservation of those people is one of the major tasks of the Russian Army. That is why Russian Armed Forces evacuated 115,000 civilians from Kherson's population of 280.000--this is more than 40% of civilian population.

Finally, for those who still do not understand, here is flooding map from Kakhovka Dam to Kherson, once the dam gives. 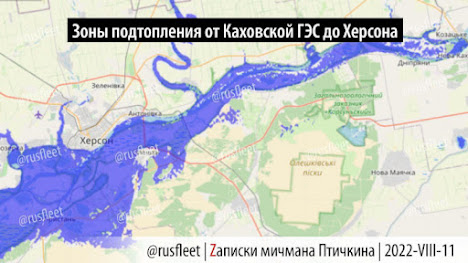 Anybody wants to defend it, when the waters come?