This Is Getting Curiouser And Curiouser...

I am talking about news which will not be reported by "free" and "democratic" US media. Granted that it was CNN Turkiye which reported on it:

Translation: According to the breaking news, Interior Minister Süleyman Soylu said in a statement after the explosion on Istanbul Taksim Istiklal Street, "We do not accept the condolence message of the US Embassy. If we had not caught the attacker, he would have fled to Greece today." said.

That's gotta hurt. Then Soylu explained why Turks do not accept any condolences from the US.

The only "message" the combined West can send is that of terrorism. For everything else there are neither will nor resources. But let's stay in Turkiye.

Reports have circulated in Russian media about secret US-Russian talks hosted by Türkiye. The Kommersant daily reported, citing anonymous sources, that the un-announced meeting is allegedly being held on Monday in the Turkish capital Ankara. The outlet reports that Moscow has sent Sergey Naryshkin, director of Russia’s Foreign Intelligence Service, or SVR, to the talks. Kremlin spokesperson Dmitry Peskov later confirmed to Russian media that bilateral talks had taken place in Ankara, adding that they were held at the US’ initiative. Earlier this month, Western media reported that top Russian and US officials were engaging in undeclared contacts. According to the Wall Street Journal, US national-security adviser Jake Sullivan has been engaged with Yury Ushakov, a senior foreign policy aide to President Vladimir Putin, and with Nikolay Patrushev, Sullivan’s counterpart in the Russian government.

I am on record, that the back channels are now getting very active, because the US can continue with optics only for so long. See my latest video on this too. US needs a "deal", because after the hysteria with Kherson anyone who ever studied even WW II history can see what happened. Hence risible Western media's waxing "strategic" while talking about "stalling momentum" of VSU. 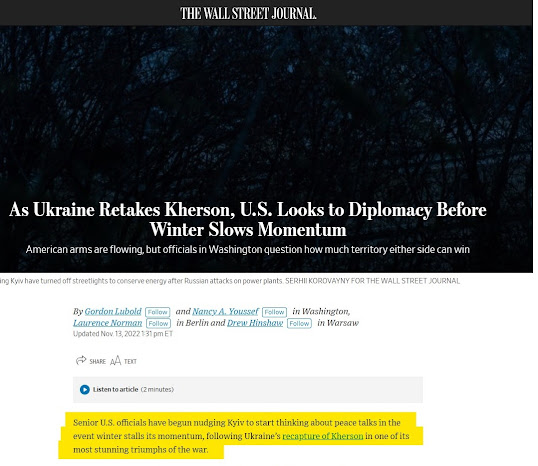 I understand, those poor morons from WSJ never heard of physics nor about the meaning of momentum including in its specific military applications. So, we may try to remind them that momentum in military iteration has a lot in common with its physics, mechanical, nature: p=mv, that is to say mass multiplied by velocity. In other words it is the velocity the mass gains. In layman's lingo the military momentum it is the mass (quantity) of the troops multiplied by their speed of advancement. For anyone who ever bothered to see how Kherson was evacuated it becomes clear that there was no any advancement by VSU in Kherson area which Russians successfully defended since February. Famous VSU Kherson's offensive in August-September ended up with catastrophic losses for VSU who never advanced anywhere, until Russians decided to evacuate Kherson.

So, in any physics or military sense US media, as usual, BS the public. Reality for the US, of course, is grim militarily because large NATO (let's call it what they are in reality) force is now stuck in Kherson's operational and strategic dead-end, while the bulk of mobilized force for Russia, roughly additional 200,000, is getting ready to deploy by the end of November--early December. After that it is up to General Staff to decide how they will approach it. Hence convulsions on the American part in desperate attempts to stave off what is potentially coming and at least try to "freeze" the SMO while trying to prevent further demolition of 404. Hence Zakharova's statement about "taking account of realities", which are very simple--sure, let's talk, Russia always ready to talk, but Kherson, Zaporozhie, Donetsk and Lugansk Oblasts are OUT of question, not to speak of Crimea. Those are Russia's territories, so no discussion is possible. For the rest...

Naryshkin is a professional intelligence officer and his task is to gauge if the US is trying to do a "seasonal" thing--meaning trying to sabotage anticipated by many Winter drive by Russia deeper into former Ukraine, or if the US really wants some long term settlement. At least the fact that the US asked about such discussions and even Sleepy Joe talks about the reduction of tensions are very good signs. And, the same Kommersant spilled the news that (in Russian) Vicki Nuland wants to get to Moscow. In November. Poor, poor Mr. Ryabkov, BUT get a load of this. It is amazing, Vicki going to Moscow to talk, LOL. Somebody is desperate in D.C. But don't tell me that I didn't warn about it. Read my lips--you can do "optics' for only so long, then realities on the ground begin to take control.

For Ryabkov who will have to tolerate this harpy in MID's skyscraper in Moscow. 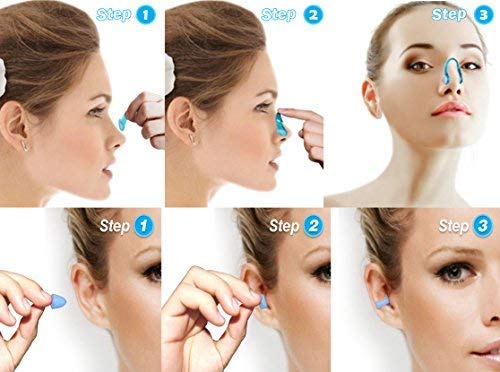 There are many good brands of both nose clips and ear plugs which Russian diplomats can use while pretending to communicate with this war criminal. Yes, she is on the banned list, but today is a bad day for Ramzan Akhmatovich Kadyrov--he was removed from the State Department's sanctions list. He was so proud and honored to be sanctioned. I mean it. I think they still need her to somehow get to Moscow and are ready to do a lot for that. Read my lips--the US is desperate. Someone competent in Pentagon or CIA finally succeeded in conveying the message to the White House and we observe first reactions to that in D.C. This is your primer for Monday.
UPDATE: Thanks to gigi Bi and others who pointed this out, evidently, the news about Nuland coming to Moscow were erroneously reported by Russia's news outlets. So, disregard and rejoice since this waste of a human being is not coming to Moscow, after all. The rest of the post applies, including the issue of nose clips and ear plugs.
Posted by smoothiex12 at 9:59 AM

Email ThisBlogThis!Share to TwitterShare to FacebookShare to Pinterest
Labels: Primer for Monday