... a corrupt and fun-free World Cup starts in Qatar. Don't you ever think that I am a prude--I am a prude only for my family, but in general I did a lot of crazy shit in my life, including extreme fun (I am not going to delve into details of that) and that is what World Cup always was--bunch of inebriated people mingling together, rooting, screaming, cheering, dancing... crying. But apart from a beauty of the game, it is always a humanity on parade. It was my dream to see WC 2022 in the US, Seattle was one of the venues, but now we know how Sarkozy made a true French football legend Michelle Platini vote for Qatar. France wanted contracts there.

Just take a look at this documentary on Russia's WC 2018.

Now to the subject matter. I am on record--I always rooted for the US National Men's Team. In 2002 I fell in love with them. They were not only fearless, they played an amazing, almost romantic in its abandon, counter-attacking game and they would have rolled over Germany (Germany! Yes THE Germany), until they were killed by a corrupt referee.
This was the team which could have reached a final. 20 years passed since then.

The U.S. Men’s National Team has ditched the red, white, and blue in favor of a rainbow flag in order to “bring attention to social issues” while they play in stadiums built by slave labor. The USMNT decided to change the colors on the shield logo, replacing the red stripes with the colors of the gay and transgender (and Black Lives Matter) “pride flag.” Coach Gregg Berhalter suggested that Qatar has “made strides and there has been tons of progress,” but the country has more work to do to be more inclusive. Therefore, the USMNT will make the pride flag part of its normal uniform.

Here are the colors: 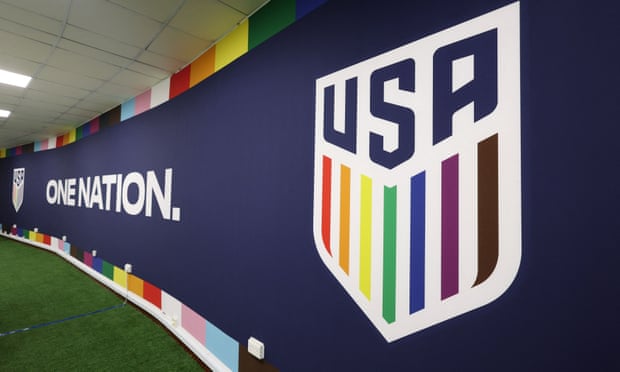 What can I say? I am not rooting for that. Global sports is long overdue for a complete overhaul, starting from abolishing International Olympic Committee and reconstituting FIFA on a completely different bases which promote the game, not woke BS and bribery. Keep utterly corrupt Olympics banned--those are insult to morality and intelligence. Well, my good ol' reliable Italy for which I root for more than 44 years now, I'll be always Azurris' fan, despite the sad fact that they didn't make it to Qatar. Serbia? Sure! Maybe Portugal, I still admire CriRo and they always had some amazing talent there. Anybody, but not this.
Posted by smoothiex12 at 9:22 PM