Why Russia Is Not Running Out Of Ammo.

The hint is in the latest statements by Vladimir Putin, Sergei Lavrov, Ushakov and many others. To put it in simple terms: Russia is NOT running out of ammo, high precision stand off weapons, tanks and aircraft because Russia was getting ready for the war with NATO (euphemism for combined West) in which even SMO is but one of many fronts and operations. Surely, RUSI's report on the "return" (I never heard of it ever going away) of "industrial warfare" may have come as a surprise to West's "elites", but the truth is--human civilization and its, sadly, major product--the warfare--always ran, runs and will continue to run on such things as steel, aluminum, oil, other sources of energy, other materials which are crucial in production of anything war related starting from fuel and artillery shells to finished and highly complex things such as satellites, submarines and combat aircraft. No steel, aluminum, composite materials or oil--no civilization and no modern warfare.

So, the latest data on steel, which comes into... everything in human civilization, and especially into war effort, for 2021 looked like this: 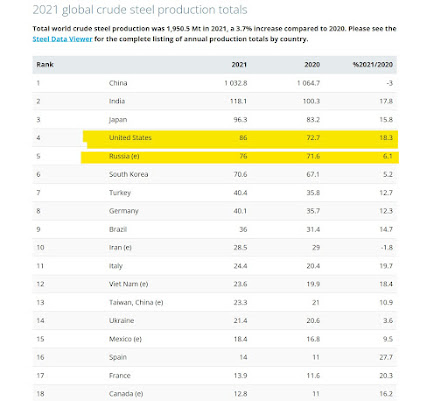 As you can see yourself, Russia, who is now fighting a whole of combined West is doing fairly well in terms of production of the key war material, and even with the estimate (e) qualifier in a front of its data, which means no accurate data, often by design of western sources, is roughly at 90% of steel production by the United States. Not too shabby, once one considers the fact of Russian population being more than twice smaller. And as I said, steel translated into shells, tanks, submarines and other things of this nature. OK!

What's the deal with other crucial material from which most of combat aviation derives--aluminum. 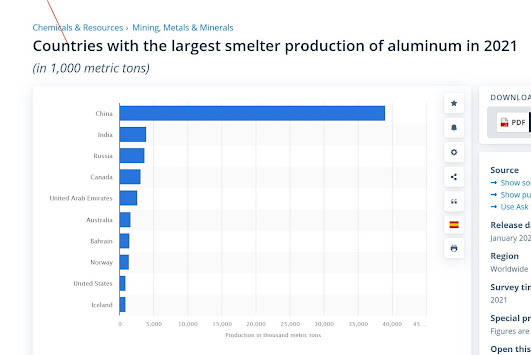 Oh boy, the only hope for the US in this crucial material is its northerly neighbor of Canada. Without Canada's aluminum the United States is not even a player at aluminum market against Russia and India. Forget about China. And if one subtracts a magnificent American infrastructure she inherited from Asministrations of FDR or Eisenhower, among a very few others, overall state of modern American infrastructure is not that great. And once one begins to view the energy production, look at the latest for 2021: 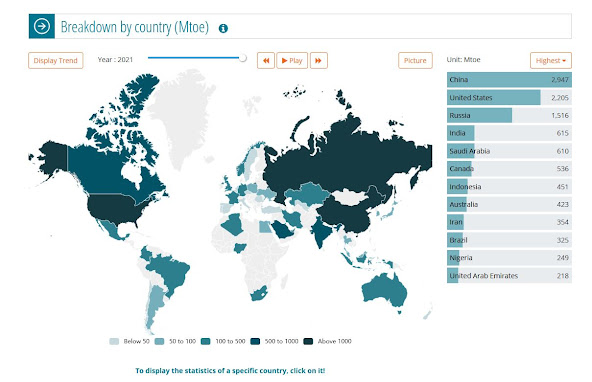 Think about it. Russia, being twice smaller in population than the United States, produces 69% of American production of energy and more than half that of China. To produce a variety of both civilian and military products you need energy, a lot of it. And this is precisely the reason Russia is not running out of ammo and high precision stand off weapons, because Russia IS prepared to take war to where combined West realistically cannot, without obliterating human civilization.

And even in this horrifying, unthinkable, business there are many indicators that Russia may survive in one form or another, while combined West will cease to exist physically. It is a horrifying scenario to even contemplate, but it is clear that Russia already has in place a serious ABM program, which will only expand and may, in the future, mitigate US nuclear deterrent. In fact, all indicators of that are in place. But then again, I warned about it for years when was calling on the US (Europe is not a factor here) to engage Russia on a whole host of issues of mutual relations in order to find modus vivendi. It is late now, especially against the background of an economic catastrophe unfolding for the combined West and the issue is now existential and metaphysical, not just geopolitical one. And Russia is not running out of ammo.