Oh, The Drama! Oh, The Gadgetry!

You all know that for many years I try to get a simple tactical and operational point across and that the US Army never fought under the conditions of a constant fire impact not only at the front-lines, but in the operational depth where your preposition areas, HQs of Divisions and Corps, ammunition and other materiel depots are subjected to constant strikes. Such as VSU learned, again, yesterday when 3M14 flew into Vinnitsa's Officer Club and wiped out the top brass of Ukie Air Force (whatever is left of it) and foreign "providers" of the remnants of the Soviet-era MiG-29s and SU-25s from former Warsaw Pact, now NATO, countries (in Russian). The United States Army simply has no reference point and any air-defense capability at the disposal of NATO today is simply insufficient or technologically obsolete to deal with salvos of Russia's stand off weapons.

Evidently this fact somehow dawned on one of the US "veterans" who in dramatic exposition of resolve and "dedication to mission" decided to volunteer to fight for Kiev regime.

A U.S. Army veteran who independently and voluntarily fought in Ukraine warned on Thursday that the hardest days of fighting the war are still to come, as the Russian military tightens its control over territory in the eastern part of the country. Retired U.S. Army Staff Sgt. James Vasquez, who has returned from combat in the country but plans to go back, told the congressional Helsinki Commission during a briefing that while the Ukrainian military is better off now with increased foreign support, the most difficult fighting lay ahead for soldiers. “We have much more support now, and we have the weapons and gear that we need to be able to fight properly,” Vasquez said to the panel. “The fight’s harder than it was when I left. And that was hard fighting when I left.” Vasquez shared moving and oftentimes difficult details of his time in Ukraine at the hearing, alongside retired U.S. Marine Corps Lt. Col. Rip Rawlings, who is providing logistical support to the Ukrainian military through he and Vasquez’ foundation, Ripley’s Heroes. Vasquez, who has gained a social media following through the videos he shares from the battle’s front lines, said he has “pretty much sold everything I owned” so he can return to the fight in Ukraine.

Why this veteran testified in a front of Congressional Helsinki Commission--a fraudulent outlet used solely for propaganda purposes--completely baffles me, but whatever the rationale is, it is good that Vasquez, and this retired USMC Lt.Colonel recognize the fact that "the most difficult fighting is ahead". Correct, because as Vladimir Putin stated clearly: 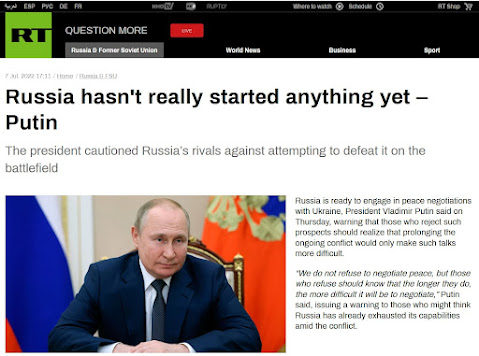 This means that if necessary the volume and the "weight" of the salvo to operational depth could be increased order of magnitude and that will have very little military romantics left for all those "veterans" of fighting third rate armies or, altogether, lightly armed insurgents. War is not about just learning how to wear the "tactical gear" and recognize foreign explosives and small arms. It is, per our good ol' friend Clausewitz, about "compelling the enemy to do our will". The best way to compel the enemy to do one's will is to destroy its will for resistance. The best way to destroy such a will and impose your own is to annihilate the enemy in industrial quantities and that task falls on the variety of fire means (огневые средства) of which Russia has huge variety and numbers. Like this:
You know, this Iz.305E--a lovely 25 kilometer range INS and GLONASS guided missile:

or this shaitan weapon. All of which received baptism by fire already in Syria. I, of course, do not talk about all kinds of hellish long range systems such as MLRS Tornado or Iskander, also with all kinds of very nice guidance methods ranging from inertial, to optronic to GLONASS, to radar or all of it combined. I bet Taliban or Saddam's Army didn't have those. That is why all those Western "advisers" in Ukraine today are desperately trying to collect some war correlates in order to figure out how to change US Army's field manuals and procurement policies in order to have the chance against those nasty freedom-hating Roosskies. I think it is too late and too little, but, hey, who am I to decide for Pentagon thinkers how to fight the armed forces of which, as it turned out, they had very little understanding.

As one of the Representatives noted:

Rep. Joe Wilson (R-S.C.) lauded the veterans for their decision to volunteer in the Ukrainian conflict at the briefing. “Foreign fighters have actually come in to heroically volunteer and are enduring intense combat conditions and witnessing the gross human rights violations perpetrated by (Vladimir) Putin.”

Mr. Wilson, those are not really that "intense combat conditions". As the President of Russia stated--you ain't seen nothing yet. But even what has been seen terrified very many in the West. And Russia's main forces haven't been even introduced yet. So, if many confused and disoriented "veterans" from the West want to experience a real war, they will surely be welcomed by recon and fire power they never knew existed.

But now, apart from "planned withdrawal" (a euphemism for running scared shitless from positions) from Seversk, which is about to fall, Ukraine's Minister of Defense Reznikov, who just a few days ago proclaimed those plans to start counter-offensive with the aim to retake Southern Ukraine from those Rooskies, suddenly (not really), and you have guessed already, announced (in his interview to The Times) that there was "misunderstanding" and that the talk was merely about "developing plans on de-occupation" (in Russian). No shit. But the drama, the drama! I wonder how's the movie, a Hollywood creep Sean Penn is directing, about "heroic" Ukies progressing? When will we see this wartime drama about Nazi regime in Kiev and its enablers from Washington, London and Western media and... Hollywood? Cannot wait for it.