The Numbers Begin To Roll In.

I know, it is the 4th but still, life doesn't stop. So, Shoigu gave the count (preliminary):

Translation: "An offensive operation was successfully carried out to liberate the territory of the LPR. Within two weeks, groups in the Gorsky cauldron in the areas of Lisichansk and Severodonetsk were surrounded and liquidated. <...> The operation was completed yesterday by the liberation of one of the largest cities of the LPR, Lisichansk. control of 670 square kilometers of territory. The total losses of the Armed Forces of Ukraine amounted to 5,469 people, including irretrievable 2,218," he said. According to Shoigu, the Armed Forces of Ukraine also lost 196 tanks and armored vehicles, 12 aircraft, one helicopter, 65 drones, six long-range anti-aircraft missile systems, 97 multiple launch rocket systems, 166 field and mortar artillery guns, 216 vehicles. "In Lisichansk, the enemy threw 39 tanks and other armored vehicles, 11 guns and mortars".

The reason I say "preliminary" because it will take some time before additional KIAs of VSU will be removed from rabble, forest areas etc. This removal, usually, lasts couple of weeks and numbers will only grow in terms of KIAs.

Of course, students of NATO warfare, which is primarily in PR, such as Ze' "adviser" Arestovich already stated (in Russian) that the loss of Severodonetsk and Lysichansk was "a successful operation of VSU". What can I say, it is a well known fact that Nazi Germany also defeated the Soviet Union. So, it is all good. These people are darlings of the Western "elites" because they are very much alike.

In related news, Combat Approved finally (finally!) went back decades ago and told the story of Victors-III, project 671RTMK SSGNs, capable to carry a strategic cruise missile Granat (they still do)

This is the history which very few among laymen know, only professionals and people who are into the issue knew what appearance of the first pr. 671 RTM (K--is for same RTMs but carrying cruise missiles) meant--in 1979 when the first one was launched--it meant that Soviet SSNs were now going toe to toe with the Los Angeles-class subs of the US Navy. I wrote and spoke a lot on the issue of Soviet technology of 1980s--it was beginning not only to catch up in terms of overall performance, always good, but in specific terms of signal processing, quieting and other crucial parameters. That is why Normal Polmar gave this forecast in 1989. 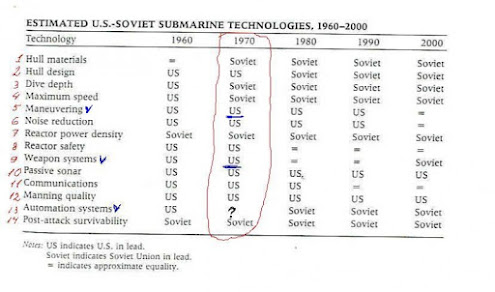 I would say that he was very accurate in his prediction. Which still doesn't negate the fact of the US Navy having today a world-class, top-tier submarine force. Even when one considers a very negative dynamics for the US Armed Forces as a whole. But for now, US sub fleet is a hugely potent force with state-of-the-art technologies and still very high level of training of its personnel. What will be its future? Who knows. A transition from old and nearing moral obsolescence Ohio-class SSBNs to modern Columbia-class SSBNs should demonstrate some trends. For now it is very slow. But we'll see.
Posted by smoothiex12 at 12:49 PM