Especially against the background of Ukie Defense Minister Alexey Reznikov suddenly discovering one million strong army in 404 and announcing (right, I kid you not--he announced it) the coming counter-offensive to retake South. I don't know what kind a potent shit they are taking now in Kiev, but thankfully Larry Johnson is here for us not to scratch our heads in vain, trying to understand what Kiev is up to. So Larry opens:

The average person trying to decipher the meaning from the daily briefing of the Russian Minister of Defense (aka MOD) is likely overwhelmed by the long list of Ukrainian military units being hit and the variety of weapon systems employed against the Ukrainians. Let me break it down for you. I have taken the liberty of putting the identities of the Ukrainian units and their locations into a spreadsheet. The result is eye-opening and, I think, will help you grasp what Russia is doing.

Then he proceeds with some numbers based on Russian MoD. And he concludes correctly with this:

Russia is playing its cards very close to its vest. While the MOD briefings provide a handy laundry list for tracking the kinds of losses the Ukrainians are suffering in men and materiel, Russia is not telling the full story of the devastation they are unleashing on Ukraine’s military. But the goal set by Putin–i.e., demilitarization–is being realized. Up to this point Russia has not targeted the command headquarters of Ukraine’s military in Kiev. If the U.S. and NATO persist in ramping up the weaponry they send to Ukraine, Russia has the ability to hit the top level command posts. If Russia does this they will likely kill and wound U.S. and other NATO officers. Russia has avoided launching such an attack, but if U.S. supplied weapons continue to kill civilians in the Donbass Russian patience may reach its end and they will send a devastating message.

I also want to stress, again, that bar some obvious high-end involvement by Russian combat aviation, stand-off weapons, obvious state-of-the-art ISR and artillery, it is clear that by now the bulk of fighting on the ground is performed by LDNR forces and Russia's National Guard (Rosgvardiya) and main forces, are being held in reserved and are used very sparingly. So, I guess Ukie 1 million-strong army is about to get acquainted with all the firepower of Russian Army, wink, wink.

In related news, somebody started to circulate the picture allegedly from Germany, stating that more and more similar banners appear all throughout Germany. Can our German friends confirm or otherwise this? I understand it is not a mass phenomena, but if thousands of Poles marched in Warsaw with slogans demanding Poland quit NATO and join BRICS, one would assume that Germans, especially Eastern Germans, might have their own view on current German government, about which Mark Chapman did a good write up today. So, here is the photo: 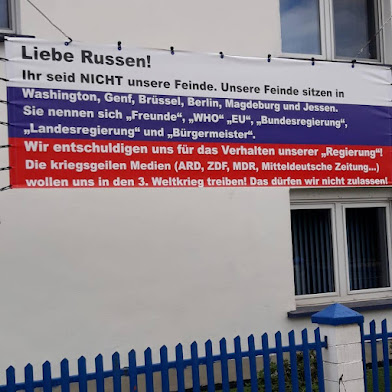 It asks Russians not to mix ordinary Germans with their lying media and insane government. Most Russians don't, but still... as in O.Henry's Roads of Destiny.
Posted by smoothiex12 at 9:17 PM