As Larch already provided in other thread some summary on the new Russian Maritime (Морская) Doctrine--it is not just Naval, it is broader--it is geopolitical. Some already called it a challenge to the US Navy. While you can see English summary of new Doctrine in Larch's post here, it has to be stated clearly that Russian Navy was always a challenger to the US Navy based on a simple principle, with the exception of utterly catastrophic 1990s, that it was a Sea Denial force designed specifically to remove naval threats from Russia's shores and this task remains the core of Russian Navy's mission. Five years ago I wrote for the US Naval Institute:

Such carriers and their battle groups would be able to meet any challenge in remote areas and would provide Russia with strategic stability near her shores ,and a few zones of interest in a time of dramatic global power rebalancing. The Russian Navy doesn’t need to fight for a global sea control. The Russian Navy is not going to challenge the U.S. Navy’s global maritime dominance. The Russian Navy’s main task is to provide a reliable defense of Russia’s shores and avoid war by presenting a defensive and forbidding posture. The Russian Navy is an organic part of the larger military force of Russia, whose only concern is preventing a global conflict. In this sense, the Russian Navy is completely integrated into the Russian tradition of national security, which spreads across the wide spectrum of activities, encompassing diplomacy, coherent foreign policy, intelligence and military force—a set of security imperatives erroneously dubbed in the West “hybrid warfare.”[15] Sergei Gorshkov prided himself on turning the Soviet post-World War II Navy into a modern fighting force by the end of 1960s. That fleet was called the “Raketno-Yadernyi,” the Missile-Nuclear Navy. Today, the Russian Navy is on its way to becoming a leaner and more potent Raketno-Yadernyi version of its former Soviet self, capable of carrying out any task in defense of its country. By doing so, the Russian Navy has finally found its mission. Considering Russia’s immense and tragic experience with warfare, such an accomplishment is no small feat. Especially in the absence of a coherent navy specific doctrine.

Well, the coherence finally was provided today in new Doctrine. It is based on two fundamental pillars which, naturally, have been overlooked in the West:

1. Revelations of the real size and scope of Russian economy, which, as it turned out (surprise-surprise), is huge and immensely influential globally;

I want to remind you, again, this: 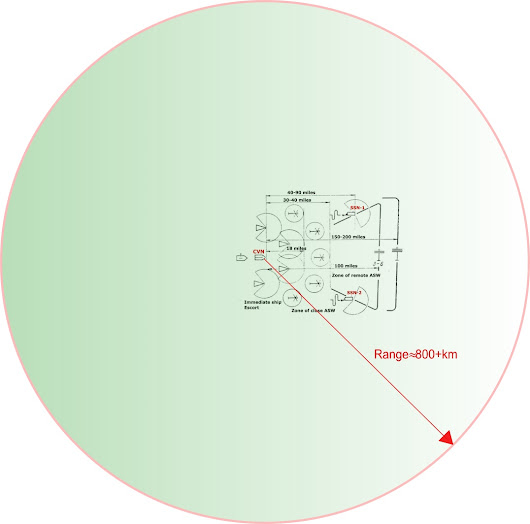 This is the reality of a missile salvo at the range of P-800 Onyx, or of HALF the range of 3M22 Zircon against any CBG. In other worlds, the perspective Russian carriers will out-range any US CBG by missile weapons alone, not to speak of airwings.

The change of the tone of the new Doctrine is not surprising, however, the time of co-existence with declining and aggressive West is over--massive geopolitical realignment with severe military ramifications is here and it is enough to take a look at SMO. The events such as outbursts of the so called Norwegin "diplomat" in Murmansk hotel a few days ago, or Ann Coulter exhibiting a very good level of awareness and putting this uneducated moron Pierce Morgan into his place yesterday are just some private cases of a larger trend on reality hitting home and biting ass.

This is just an infinitesimally small portion of moods and thoughts of people who, unlike most Western journos, didn't lose their brains. This IS the new brave world and priorities change, as it should be. Even earlier, 9 years ago, I wrote for USNI Proceedings.

Read it attentively, in 2013 when I was writing this, I gave the "cut out" time for 2020. Meaning Russia's economy recovering and restructuring and a new generation of ships and weapon systems getting ready by that time. Indeed, in 2022 the decision to turn Russian Navy into a truly Blue Water global navy has been made and the doctrinal fog has been dissipated.

Per this attack on the HQ of the Black Sea Fleet, as was totally expected, it was a local job with some small drone. It has nothing to do with Air Defense but with classic terrorist-diversionary activity of local element being either SBU assets or simply fanatical Russophobes--there are many of such people in Russia. Plus, NATO "advisers" are only good for training specifically terrorists but this is the field of responsibility for FSB and MVD. The only effect was 6 slightly wounded personnel and cancellation of celebration of Navy Day in Sevastopol.

In related news, yet another small present to the Black Sea for Navy Day, a new patrol ship of project 22160 Sergei Kotov was transferred to the fleet (in Russian). 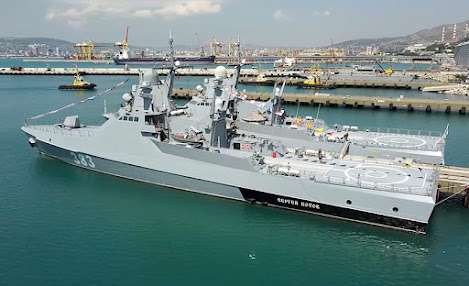 Those shitstorm corvettes evidently ARE fully capable of carrying a container Kalibr family missiles, so Russians may get further in their version of LCS it seems. Those in the know say the ships are really good.  So, this is your primer for Sunday.
Posted by smoothiex12 at 12:49 PM