People asked me to comment on this "Dark Eagle" thing:

I'd really love Andrei's comment on this, what is even more stupid IMO is that Tyler doesn't challenge any of the statements there

And the way a bunch of office plankton from ZeroHedge re-posted an utter BS from British tabloidThe Sun about this super-duper hyper-sonic missile "Dark Eagle" which, actually, doesn't exists as a weapon and I highly doubt it will in 2023. Here is the "picture" from The Sun, which we all know is a respectable expert publication (wink, wink) and which follows a fine British tradition of selling shit to its public packaged as news. Incidentally, same goes for US media. 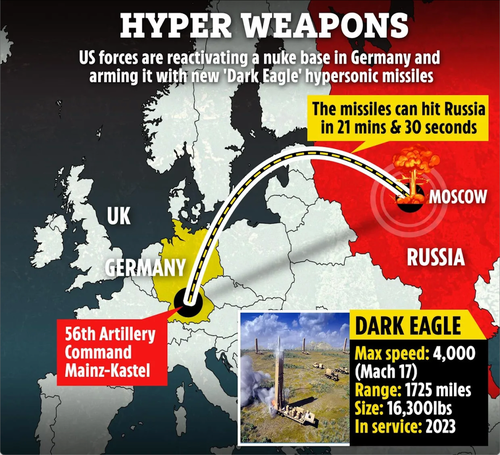 So, here are my comments:

1. Dark Eagle does not exist as a weapon system yet. Some prototype was tested couple of times and I don't doubt very much that activity which happens right now in Germany, such as "deployment" of ground infrastructure for this future missile is nothing more than PR. In fact, I am almost 100% positive that it is a PR in a desperate attempt to address concerns about actual hyper-sonic gap between the US and Russia (and China), so the grandiose statements followed.

2. Obviously, for a Mach=17 missile, which is roughly 5.8 kilometers per second, even if to consider a short and slower boost phase, it should cover the range of exactly 2000 kilometers between Mainz-Kastel launch site in Germany and Moscow in: 2000/5.8=344 seconds or 5.7 minutes, which was stated originally in the low quality picture in The Sun. But then, something happened (a call?) and...

3. The time to reach Moscow was increased to 21 minutes 30 seconds. Why? Well, Russians know what the US is working on in this program (you can find it in Russian media space if you want to) and some military people pointed out that the United States is basically trying to recreate a longer version of Iskander and place some version of Common-Hypersonic Glide Body on top of it and it is not a Mach=17 weapon. Probably Mach=5-7 weapon accelerated by some inter-mediate range booster, maybe enlarged SM-3 motor or whatever will be used.

4. What it will not be--it will not be a real hyper-sonic cruise missile capable to strike moving targets on land and on the surface of the sea. In other words, it will be neither 3M22 Zircon nor Kinzhal which are bona fide cruise missiles (Kinzhal being aeroballistic one). So...

5. If we are talking about defense from such a missile which is not even in IOC and is primarily a PR action designed to forestall  streaming in constantly news about successful tests of Russian and Chinese hyper-sonic weapons and technologies, so much so that warmonger and neocon-in-chief in the US Senate, Lindsey Graham demanded a classified briefing on the latest tests by Chinese of their glider. On a defense side from this future Dark Eagle missile, enough to take a look at S-300V4 and its organic 9M82M/ME missile with its range of 200 kilometers and speed of 4,500 meters per second, that is M=13.2 to understand that Russia's AD/AM systems long ago covered the performance envelope of possible future US hyper-sonic weapons. In the end, I wrote today about S-500 already in serial production and deployment and S-550 which will be available in 2025.

6. But here we also hit this impenetrable cognitive wall, a deliberate semantic goal post moving device invented in the West to cover its very own loss of the arms race, which confuses people completely and they fail to grasp this tremendous difference between real hyper-sonic, atmosphere-riding, fully controllable and guided high precision weaponry such as 3M22 Zircon (or Kinzhal) designed to attack and annihilate any types of targets: moving and stationary, ground and sea, and all those primarily fixed ground targets attackers such as this Dark Eagle thing, not to speak of any other ballistic inter-mediate and long range missilery which is "hyper-sonic" by definition since flies with speeds of higher than M=5. But nobody calls International Space Station (ISS) a hyper-sonic space station.

7. And here is the main point: the United States is nowhere near in fielding high supersonic, forget about genuine hyper-sonic, anti-shipping and land-attack missile. The US tried once to develop an indigenous supersonic anti-shipping missile--the missile prototype came out so underwhelming in performance and so expensive that all attempts have been abandoned. The situation became so bad that famous scandal hit headlines in 1990s.

What do you do when you need to combat an enemy weapons system but can’t do so without understanding it? Well, in America, you buy the enemy’s weapons system. Such a strange tactic was carried out in the mid 1990s when, following frustrations in learning how to accurately develop a high-speed target to test anti-supersonic weapons platforms, the US Navy simply decided to buy the MA-31, a variant of Russia’s air-launched rocket-ramjet-powered Kh-31 missile. In 1995, as an effort to meet the Navy’s requirement for a Supersonic Sea-Skimming Target (SSST), McDonnell Douglas received Kh-31as for evaluation from Zveda-Strela, resulting in the  MA-31. Known by NATO as the AS-17 Krypton, the missile was designed to hunt Aegis vessels and Patriot missile batteries, entering service in the 1980s.

Let me tell you, the amount of advanced military tech both US and China got from Russia is immense. You can read the whole article about X-31s here. So, all in all, the US still doesn't know how to produce even a remote analog to nearing obsolescence P-700 Granit, let alone latest versions of P-800 Onyx. At this stage, hyper-sonic weapons of 3M22-class are simply beyond the reach as are the defense systems capable to deal with those with any, even minimal, chance of a success.

So, whenever I hear such "news" as Dark Eagle's hype, I understand that people are being, as is standard today, lied to in order to allay their concerns and give them some comfort with a notion that at least "something is being done". In reality however, this hype is designed to avoid a disclosure of the scale of the West's loss across the board from economy, to culture to military, not to mention the fact that media everywhere long ago stopped being news organizations and are either pushers of suicidal policies or providers of everyday entertainment in which only hype sells. Plus, of course, who can forget a good ol' panem et circenses. One gets what one paid for. As for Germany. German "elites" are bought by the US and, in fact, are people with no principles nor national pride. US will tell them to jump, they will ask how high. Germany is also no friend of Russia and the hatred of Russia among much of the political and intellectual class in Germany, as well as among some substantial segments of population is genuine, not to mention being exacerbated by German media which compete with British tabloids and US MSM for the title of the best collection of human and info trash. And this is my comment for today on this Dark Eagle thing.

Reminder: please support me on Patreon. I will post this piece there too.