Russia does not need 404, in fact, Russians overwhelmingly do not want those people in their lives, they don't want to pay for them, and they want them to stay away from Russia in every conceivable way, bar pure geography which cannot be changed. And that's the problem for Russia, because in the end Russia will have to deal with this shithole, which like a cyst placed itself at Russia's South-Western borders and continues to deteriorate towards cancerous tumor with increasing speed. The United States, realistically, doesn't need 404 either, because while the US still exercises the idea of using 404 as a anti-Russia ram both in geopolitical and economic senses, and sleeps and dreams about Russia "invading" this territory, the US is facing one serious challenge here: what IF US desires come true and Russia DOES indeed decide to end this drama and finish off Nazi regime in Kiev?

The US will rejoice initially, because it splits in many economic respects Europe from Russia, plus Poland gets her desire (not entirely unjustified) to get Lvov (Lemberg) back and for a few moments the US would seem to have accomplished what it set out to do. Except! And here is this exception. Enter Karen Donfried of the US State Department, who, as is traditional for the contingent which passes in the US for "diplomats" to speak about what they have no clue about, waxes military. Note, Donfried is a classic, typical product of the US degenerating "humanities" field and has all boxes allowing her to swim upstream of D.C. bureaucracy checked. As most of US "diplomats" she has no idea what is she talking about when:

WASHINGTON (Reuters) - All options are on the table in how to respond to Russia's "large and unusual" troop buildup near Ukraine's border, and the NATO alliance will decide on the next move following consultations next week, the State Department's top U.S. diplomat for European affairs said on Friday. "As you can appreciate, all options are on the table and there's a toolkit that includes a whole range of options," Assistant Secretary of State for European and Eurasian Affairs Karen Donfried told reporters in a telephone briefing. U.S. President Joe Biden said he was concerned about the situation in Ukraine, repeated Washington's support for Ukraine's territorial integrity and added that he will "in all probability" speak with his Ukrainian and Russian counterparts Volodymyr Zelenskiy and Vladimir Putin. The comments came as U.S. Secretary of State Antony Blinken is heading to Latvia and Sweden next week to attend meetings of NATO and the Organization for Security and Cooperation in Europe (OSCE). Donfried said Moscow's "large and unusual" troop buildup would top the agenda at the NATO summit.

I have news for Donfried--there are no "all options on the table for the US" because if Russia does indeed decide to end it once and for all, the United States has neither forces nor resources to do anything about it, unless the United States wants to unleash a whole European War, but because Donfried spent most of her life in a make-believe world of "policy-making" she cannot grasp that Europe will not be the only theater of operations for Russia and the US proper will fast become another target. Unlike Vietnam or Iraq, Russia can wipe the US off the map and that will be it. One may ask if they are they that stupid in State Department. Yes, many are but those who are not are forced to toe the party line of primarily empty and militant rhetoric and empty threats. Yes, this is how serious it could get, but what neither Donfried nor most US policy-"makers" can wrap their brains around is the fact that operationally (militarily, that is) Russia has options in 404 because she has escalation dominance, in fact, she has escalation preponderance in 404, especially in the East of 404 where the issue will be settled, since Russia doesn't' care what is going to happen to the West of Kiev.

This preponderance manifests itself in several key fields:

1. Russia's fire-power in stand-off weapons. In other words, Russia's long reach capable to paralyze 404's command and control structure, and, not least--government control.

2. Russia does not need to really "invade" 404, at least not at the onset since she can "crush" the front from own territory. Not that it will matter anyway, since hysteria in Western media is already at near highest pitch.

3. The only thing the US will be able to do is to rush, yet again, some sort of a surface task force in hopes to gain whatever SIGINT it can get, it will be especially interested in frequencies of Russia AD systems in combat mode and will, again, start sending strategic bombers near Russia's air space. Russia can do the same or she can simply place X-101s (range of more than 4,500 kilometers) strategic aviation carriers on steady patrols and NORAD will take a note.

4. If, on the other hand, the US will decide to exercise "all options on the table", meaning inserting itself militarily into this whole thing--it will end badly for the US under any circumstances, because, as I already stated above--the war will fast spill out of Europe and no matter what path of escalation it takes, the US loses outright.

But now to the most important conclusion: even if the US does not engage militarily, a suicidal scenario as I pointed out, all tactical gains from semi or outright open Russia's involvement in settling 404 issue bears a catastrophic strategic reputational loss for the US, which will demonstrate a complete lack of power and influence of a decrepit empire. We may only speculate on the ramifications of such an outcome, not to mention the fact that at this stage Russia CAN afford, if pressed by circumstances, to finish off this artificial construct of 404 and sever its ties to the West, EU cannot. To demonstrate how far apart modern West and Russia are--Russian press looks on in awe at European idiocy and even Russian senators comment today at Germany ban of Tchaikovsky's Christmas classics The Nutcracker ballet because it is "racists" (in Russian). It was also called racist by Scotland's Ballet Company, while London changed some scenes because they "remind of harem". You cannot reason with these people, they are not normal human beings and the only thing they understand is the language of threat and if it comes to it--it is about time Russia erected a new Iron Curtain between herself and totalitarian, delusional West. For everything else--there is Master Card (c). 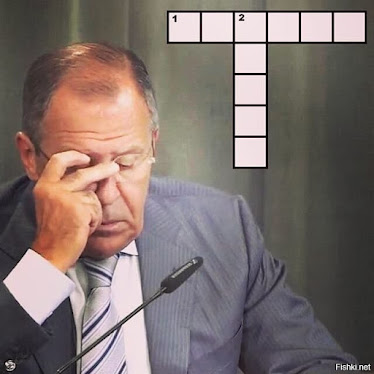 Maybe it is a time to grant the so called post-modernist West its wish? But as the saying goes think twice what you wish for... you know the rest.

P.S. Latest reports about the state of VSU (404's armed so called forces) paint the picture of utter incompetence and demoralization.